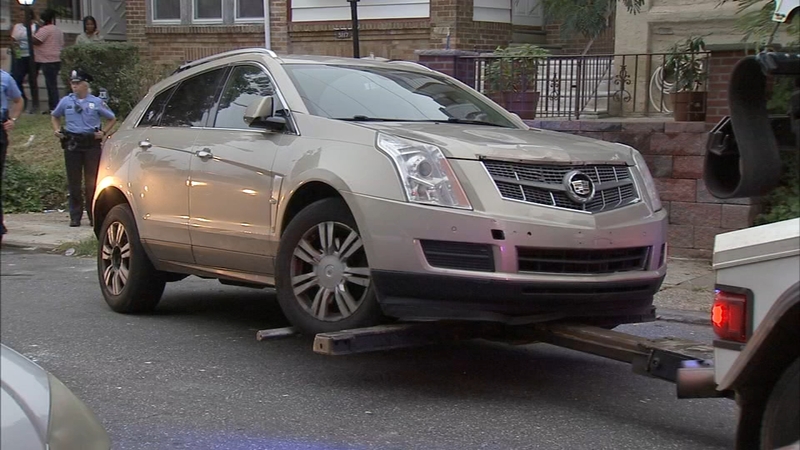 PHILADELPHIA (WPVI) -- Philadelphia police say they have found the vehicle believed to be involved in the hit-and-run that critically injured a 9-year-old girl.

Officials said the unoccupied car was found on the 5100 block of Hutchinson Street just after 6 p.m. Tuesday evening. Investigators are still looking for the driver.

"The car was coming so fast that as she tried to get in between the cars, it hit before she reached in between," said Chastity Stanley, the victim's sister.

Stanley believes her 9-year-old sister, Fatima Hunter, was trying to avoid the car when she turned into its path.

Hunter was riding her bicycle in the 200 block of Lindley Avenue in the Olney section around 7:30 p.m. Monday when she was hit.

"The video is disturbing, but we hope it generates a lot of tips," said Philadelphia Police Capt. Mark Overwise. "I have no doubt that after the collision, the driver knew they hit something, possibly seeing the bicycle clinging to their vehicle for half a block and should have stopped."

Pictured: Surveillance images and photos of a similar vehicle released by Philadelphia police

Fatima was taken to Children's Hospital of Philadelphia in critical condition with injuries to her lower body and lungs.

"We haven't been able to speak to her yet. She has basically been writing out what she has to say but it has been scribble," said Stanley.

Investigators determined the vehicle was registered to a home nearby but no one answered the door when they knocked.

Area residents aren't surprised this happened. They say the intersection of 2nd and Lindley is notoriously dangerous.

"It's kind of unsafe because they race to the boulevard," said Mike Henson. "A lot of people ride up and down the street and race up the boulevard."

Anyone with information is urged to contact Philadelphia police.
EMBED More News Videos

Driver sought for hit-and-run that left girl, 9, injured in Olney. Watch this report from Action News at Noon on September 11, 2018.