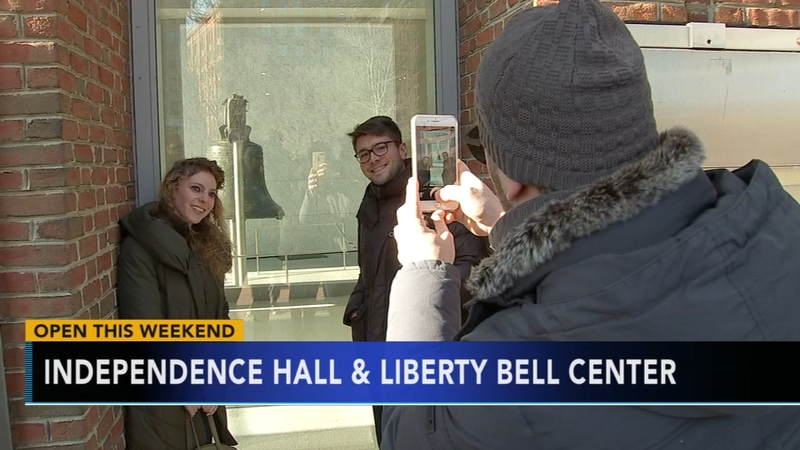 PHILADELPHIA (WPVI) -- Despite the partial government shutdown, Independence Hall and the Liberty Bell Center will reopen Friday and remain open all weekend.

The mayor's office made the announcement Thursday, saying Visit Philadelphia is donating approximately $32,000 to the National Park Service to cover the costs to keep both tourist attractions open for the three days.

"An estimated 25,000 visitors typically visit Independence Hall and the Liberty Bell Center over the long weekend (Friday through Sunday) before the New Year," the office says.

No tickets will be required.

Since the shutdown began, visitors had to look at the Liberty Bell from the outside.

The line was long on Wednesday, as everyone was hoping to get a photo of one of the country's most popular symbols. But they had to do it through the window, as there was no inside access.

It seemed most people took the shutdown in stride.

"There's not much you can do about it. It's all politics," Klaus Bernhardt of New York City said.

The Independence Visitor's Center remains open as it is operated by a nonprofit.

The National Constitution Center, also opened, does not rely on federal funding.

Some people like Bobbie Bramble of Florida were headed west to Valley Forge Park where, despite being a federal park, the Visitation Center remained open. Still, the shutdown hit Bramble in other ways.

"My daughter-in-law works for the federal government. She is shut down right now without a paycheck," Bramble said.

In addition to the visitor's center, the theater and one bathroom remain open at Valley Forge Park, but Washington's Headquarters is closed. The non-profit, The Encampment Store, made the modified opening possible.

"There are no federal employees here. Volunteers are helping keep this open. We have about two or three a day," Encampment Store employee Graham Dellinger Encampment said.

Back in Philadelphia, the following historic sites and attractions on or around Independence Mall are not impacted by the partial federal government shutdown and will remain open through the holiday weekend and beyond: