FACT CHECK: Trump's claims in his State of Union address 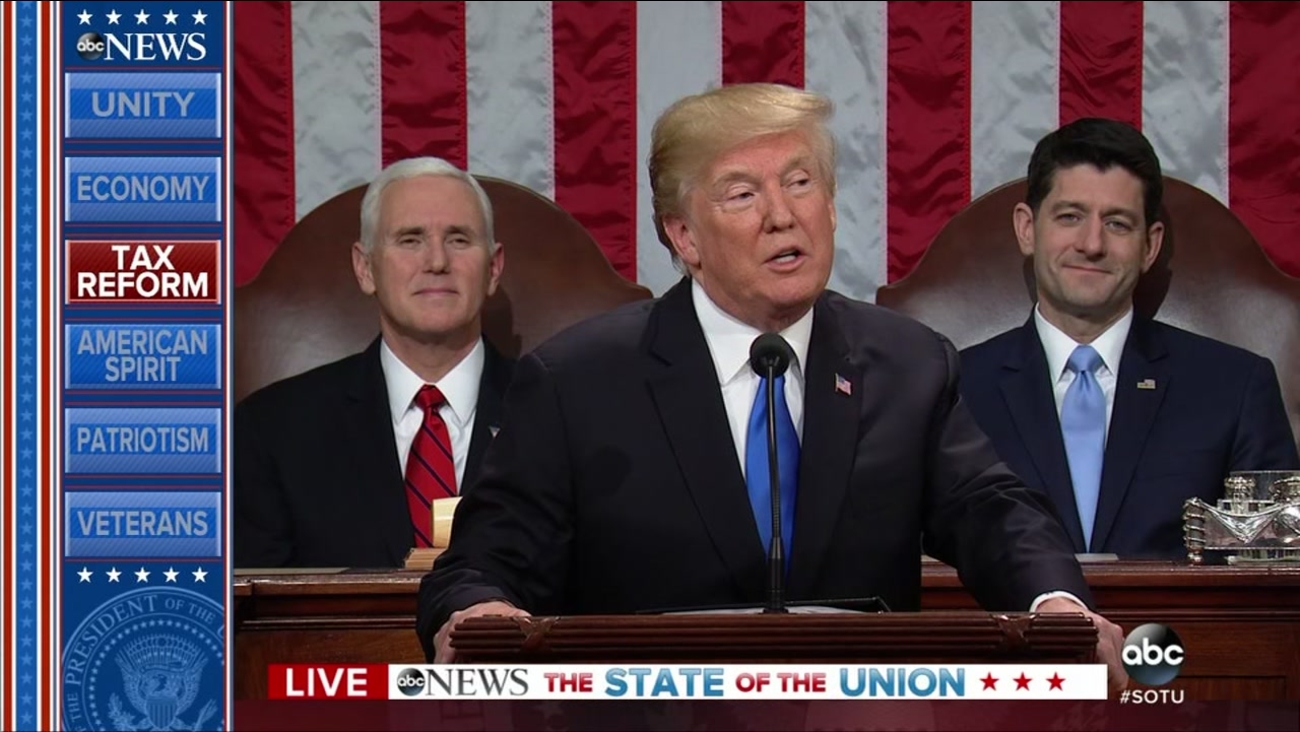 WASHINGTON -- The AP is fact-checking remarks from President Donald Trump's State of the Union speech. Here's a look at some of the claims we've examined:

TRUMP: Changes in immigration policies, including more border security, "will also support our response to the terrible crisis of opioid and drug addiction."

THE FACTS: Drugs being brought across borders are only part of the problem contributing to the nation's opioid crisis.

According to the U.S. Centers for Disease Control and Prevention, about 40 percent of the opioid deaths in 2016 involved prescription painkillers. Those drugs are made by pharmaceutical companies. Some are abused by the people who have prescriptions; others are stolen and sold on the black market.

The flow of heroin into the U.S. from Mexico is a major problem, but drugs that are brought from other countries don't all come over land borders. Illicit versions of powerful synthetic opioids such as fentanyl, which are a major factor in rising overdose numbers, are being shipped directly to the U.S. from China.

TRUMP: "My administration is committed to fighting the drug epidemic and helping get treatment for those in need."

THE FACTS: The bipartisan National Governors Association doesn't think he's lived up to that commitment. Earlier this month, the governors called on Trump and Congress to do more to pay for and coordinate a response to the opioid epidemic.

The Trump administration has allowed states to begin allowing states to seek permission to use Medicaid to cover addiction treatment in larger facilities - a measure advocates say is needed.

TRUMP: "Last year, the Congress passed, and I signed, the landmark VA Accountability Act. Since its passage, my administration has already removed more than 1,500 VA employees who failed to give our veterans the care they deserve."

THE FACTS: This statement is inaccurate. It's true that more than 1,500 firings at the VA have occurred so far during the Trump administration. But more than 500 of those firings occurred from Jan. 20, when Trump took office, to late June, when the new accountability law began to take effect. That means roughly one-third of the 1,500 firings cannot be attributed to the new law.

Congress passed the legislation last June making it easier to fire VA employees and shortening the time employees have to appeal disciplinary actions. But the law's impact on improving accountability at the department remains unclear: More VA employees were fired in former President Barack Obama's last budget year, for instance, than in Trump's first.

TRUMP: "For decades, open borders have allowed drugs and gangs to pour into our most vulnerable communities."

THE FACTS: "Open borders" is an exaggeration. Border arrests, a useful if imperfect gauge of illegal crossings, have dropped sharply over the last decade.

The government under Presidents George W. Bush and Barack Obama roughly doubled the ranks of the Border Patrol, and Bush extended fencing to cover nearly one-third of the border during his final years in office. The Obama administration deported more than 2 million immigrants during the eight years he was in office, more than in previous administrations.

Studies over several years have found immigrants are less likely to commit crimes than people born in the United States.

TRUMP: "Under the current broken system, a single immigrant can bring in virtually unlimited numbers of distant relatives."

THE FACTS: It's not happening because the waiting list is so long.

There is currently no wait for U.S. citizens to bring spouses, children under 21 and parents. But citizens must petition for siblings and adult children, and green-card card holders must do the same for spouses and children.

On Nov. 1, there were 4 million people in line for family-based visas, according to the State Department. The waits are longest for China, India, Mexico and the Philippines. In January, Mexican siblings of U.S. children who applied in November 1997 were getting called, a wait of more than 20 years.

An immigrant could theoretically bring an uncle by bringing a parent who then brings his sibling, but the wait would be interminable for most.

TRUMP: "We repealed the core of the disastrous Obamacare - the individual mandate is now gone."

THE FACTS: No, it's not gone. It's going, in 2019. People who go without insurance this year are still subject to fines.

Congress did repeal the unpopular requirement that most Americans carry insurance or risk a tax penalty but that takes effect next year.

It's a far cry from what Trump and the GOP-led Congress set out to do last year, which was to scrap most of the sweeping Obama-era health law and replace it with a Republican alternative. The GOP blueprint would have left millions more Americans uninsured, making it even more unpopular than "Obamacare."

Other major parts of the overhaul remain in place, including its Medicaid expansion, protections for people with pre-existing conditions, guaranteed "essential" health benefits, and subsidized private health insurance for people with modest incomes.

TRUMP: "Many car companies are now building and expanding plants in the United States - something we have not seen for decades."

THE FACTS: He's wrong about recent decades. The auto industry has regularly been opening and expanding factories since before became president. Toyota opened its Mississippi factory in 2011. Hyundai's plant in Alabama dates to 2005. In 2010, Tesla fully acquired and updated an old factory to produce its electric vehicles.

Trump also declared that "Chrysler is moving a major plant from Mexico to Michigan." That's not exactly the case, either. Chrysler announced it will move production of heavy-duty pickup trucks from Mexico to Michigan, but the plant is not closing in Mexico. It will start producing other vehicles for global sales and no change in its workforce is anticipated.

TRUMP: "Last year I pledged that we would work with our allies to extinguish ISIS from the face of the earth. One year later, I'm proud to report that the coalition to defeat ISIS has liberated almost 100 percent of the territory once held by these killers in Iraq and Syria. But there is much more work to be done. We will continue our fight until ISIS is defeated."

THE FACTS: Although it's true that the Islamic State has lost nearly 100 percent of the territory it held in Syria and Iraq when the U.S. began airstrikes in both countries in 2014, Syria remains wracked by civil war, with much of that country controlled by the government of Russian ally Syrian President Bashar Assad and not by U.S.-allied groups. The Iraqi government has declared itself fully liberated from IS.

The progress cited by Trump did not start with his presidency. The U.S.-led coalition recaptured much land, including several key cities in Iraq, before he took office. And the assault on Mosul, which was the extremists' main stronghold in northern Iraq, was begun during the Obama administration. But in the past year the counter-ISIS campaign has accelerated, based largely on the approach Trump inherited.

He's right that more remains to be done to eliminate IS as an extremist threat, even after it has been defeated militarily. The group is still able to inspire attacks in the West based on its ideology, and it is trying to make inroads in places like Afghanistan and Libya.

THE FACTS: That depends on how you define "tremendous." The biggest beneficiaries of the tax law are wealthy Americans and corporations.

Most Americans will pay less in taxes this year. The nonpartisan Tax Policy Center estimates that about 80 percent of U.S. households will get a tax cut, with about 15 percent seeing little change and 5 percent paying more.

Middle-class households - defined as those making between roughly $49,000 and $86,000 a year - will see their tax bills drop by about $930, the Tax Policy Center calculates. That will lift their after-tax incomes by 1.6 percent.

The richest 1 percent, meanwhile, will save $51,140, lifting their after-tax incomes by 3.4 percent, or more than twice as much as the middle class.

TRUMP: "We are now an exporter of energy to the world."

THE FACTS: There's nothing new in that: The U.S. has long exported all sorts of energy while importing even more. If Trump meant that the U.S. has become a net exporter of energy, he's rushing things along. The U.S. Energy Information Agency projects that the U.S. will become a net energy exporter in the next decade, primarily because of a boom in oil and gas production that began before Trump's presidency. The Trump White House has predicted that could happen sooner, by 2020. But that's not "now."

TRUMP: "We enacted the biggest tax cuts and reform in American history."

THE FACTS: No truer now than in the countless other times he has said the same. The December tax overhaul ranks behind Ronald Reagan's in the early 1980s, post-World War II tax cuts and at least several more.

An analysis by the Committee for a Responsible Federal Budget in the fall put Trump's package as the eighth biggest since 1918. As a percentage of the total economy, Reagan's 1981 cut is the biggest followed by the 1945 rollback of taxes that financed World War II.

Valued at $1.5 trillion over 10 years, the plan is indeed large and expensive. But it's much smaller than originally intended. Back in the spring, it was shaping up as a $5.5 trillion package. Even then it would have only been the third largest since 1940 as a share of gross domestic product.

TRUMP: "Since we passed tax cuts, roughly 3 million workers have already gotten tax cut bonuses - many of them thousands of dollars per worker."

THE FACTS: This appears to be true, but may not be as impressive as it sounds. According to a tally of public announcements by Americans for Tax Reform, a conservative group that supported the tax law, about 3 million workers have gotten bonuses, raises or larger payments to their retirement accounts since the tax law was signed.

That's about 2 percent of the more than 154 million Americans with jobs. The Labor Department said before the tax package was signed into law that 38 percent of workers would likely get some form of bonus in 2017.

Few companies have granted across-the-board pay raises, which Trump and GOP leaders promised would result from the cut in corporate tax rates included in the overhaul. Many, such as Walmart and BB&T Bank, said they will raise their minimum wages. Walmart made similar announcements in 2015 and 2016.

Before the 2016 presidential election, the U.S. for the first time in decades was getting more energy domestically than it imports. Before Obama, George W. Bush was no adversary of the energy industry.

One of Trump's consequential actions as president on this front was to approve the Keystone XL pipeline - a source of foreign oil, from Canada.
------
Send a breaking news alert to Action News
Report a correction or typo
Want to comment?
Learn more about the 6abc apps
Related topics:
politicsu.s. & worldpresident donald trumpcongressstate of the union
Copyright © 2021 by The Associated Press. All Rights Reserved.
More Videos
From CNN Newsource affiliates
TOP STORIES