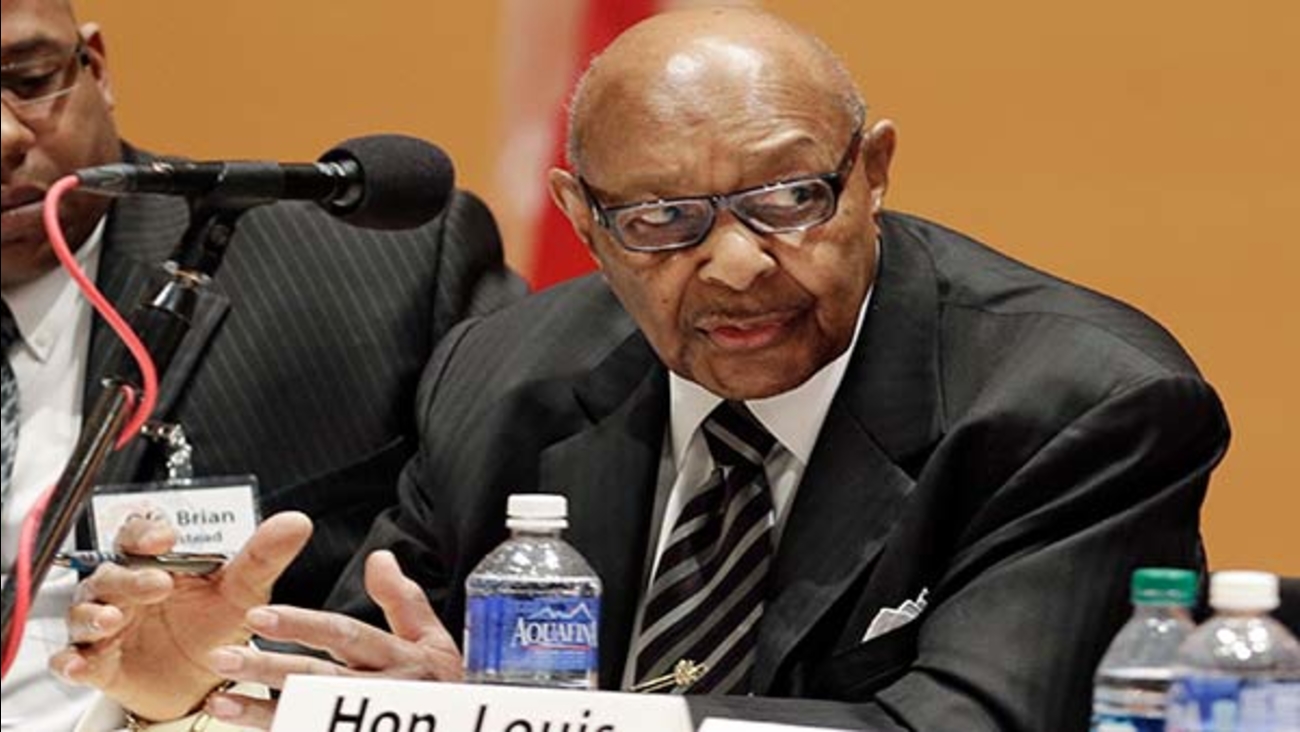 COLUMBUS, Ohio -- Former U.S. Rep. Louis Stokes, a 15-term congressman from Ohio who took on tough assignments looking into assassinations and scandals, has died. He was 90.

He died peacefully with his wife, Jay, at his side, a month after he announced he had brain and lung cancer, his family said in a statement.

"During his illness, he confronted it as he did life - with bravery and strength," the family said.

Louis Stokes was the dean of the delegation until he stepped down in 1999.

Stokes headed the House's Select Committee on Assassinations that investigated the slayings of President John F. Kennedy and Dr. Martin Luther King Jr. in the late 1970s and concluded that in both cases, there "probably" had been a conspiracy.

Later, he served on the Iran-Contra investigative committee, where he drew attention with his unflinching interrogation of Lt. Col. Oliver North.

"What we seek to do in covert operations is to mask the role of the United States from other countries, not from our own government," Stokes told North at a highly publicized hearing in 1987.

He was just as unflinching with his probe of fellow Democrats when he led the ethics committee investigation of a corruption scandal known as ABSCAM, which led to convictions of one senator and six House members. The senator and five of the House members were Democrats.

Recalling the example Stokes set, the U.S. attorney in Cleveland said Wednesday that he once had Stokes address his region's prosecutors.

"We were in the midst of a huge county corruption scandal, and public service was taking a public beating. But Lou Stokes was a there as a shining beacon of integrity, of excellence and most important of all for us, of justice," U.S. Attorney Steven Dettelbach said in a statement Wednesday.

Stokes was repeatedly called upon to exercise his law training and diplomatic skills. He did two tours of duty as chairman of the ethics committee and stepped in upon request during the investigation of a case involving the private life of Rep. Barney Frank, D-Mass., who retired in 2013.

He was one of the Cold War-era chairmen of the House Intelligence Committee, headed the Congressional Black Caucus and was the first black on the House Appropriations Committee - a powerful panel that decides how much each authorized federal project actually gets to spend.

That post gave him a platform for protecting major Cleveland employers, such as NASA Lewis Research Center, and for directing federal dollars toward hometown projects.

He said he was proud to be in a position to put money into programs that he hoped would improve the quality of life of black people and poor people.

His seniority on that panel eventually brought him the chairmanship of the subcommittee with jurisdiction over all federal housing programs, plus the Department of Veterans Affairs, NASA and many other independent agencies.

Stokes' public demeanor was patient and analytical, but colleagues also knew him as tough, principled and skillful.

He was one of only nine blacks in the 435-member House when he first took the oath of office in 1969 and never forgot his roots as the child of poverty and great-grandson of a slave.

He spoke often of his admiration for his younger brother, who served two terms as Cleveland mayor and was later a broadcaster and judge. Stokes lost some of his zest for politics after his brother died of cancer in 1996.

He also spoke of his mother, Louise C. Stokes, a widow with an eighth-grade education who supported her sons by working as a cleaning woman. She constantly prodded her boys to "get something in your head so you don't have to work with your hands like I did," he recalled. When her boys wanted games, she instead bought books.

Stokes served in the Army from 1943 to 1946 in a segregated unit where he said he experienced racism for the first time in his life.

Heading from Cleveland to take his entrance physical in Columbus, he was warned by his mother that "colored people cannot go in restaurants in downtown Columbus."

Stationed in Mississippi, he and other blacks were sentenced to the guard house for refusing to pick up papers around the white soldiers' barracks, and once confined, found the guard house had separate toilets for white and black soldiers.

Years later, when an anti-busing amendment was debated on the House floor, Stokes described the humiliation of segregation. "I was forced to ride in the back of the bus wearing the uniform of my country," he said.

Struggles with racism lasted a lifetime.

In 1991, a Capitol Hill police officer ignored Stokes' valid parking tag and refused to let the congressman into his own office building; he didn't believe the black man behind the wheel was a member of Congress.

Stokes leveled his complaint through official channels and did not complain publicly about the demeaning delay at his own office building.

At one point in his career he said he had his eye on the Senate. But long careers by fellow Democrats John Glenn and Howard Metzenbaum meant no open seat until Stokes was well entrenched in the House and on his way to becoming one of the powerful appropriations subcommittee chairmen.

In 1992, Stokes ran for president as a favorite son, winning the delegates from his home district and then, in a minor convention drama, refusing to release their votes until the Clinton campaign formally asked.

The G.I. Bill made it possible for Stokes to go to college and law school.

A criminal lawyer for two decades before running for Congress, he argued a landmark "stop and frisk" case before the Supreme Court and worked on the NAACP lawsuit that forced Ohio to redraw the lines of what would become the state's first black-majority congressional district.
Related topics:
politicsohioobituaryu.s. & worldcongress
Copyright © 2021 by The Associated Press. All Rights Reserved.
More Videos
From CNN Newsource affiliates
TOP STORIES