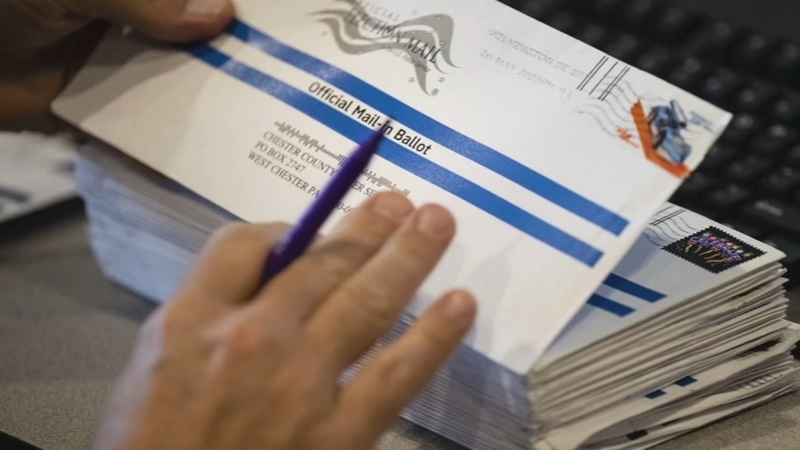 PHILADELPHIA (WPVI) -- The pandemic has many voters expected to vote with mail-in ballots.

The Pennsylvania Attorney General's Office says a flood of robocalls are intimidating voters, telling them voter information will be used to issue arrest warrants and collect on old credit card debts.


Attorney General Josh Shapiro says multiple investigations are now underway.
"However you want to vote, we are going to protect our democracy and ensure every legal voter has the right to vote in the manner they prefer," Shapiro said.

As President Donald Trump has warned of possible widespread voter fraud with mail-in ballots, some voters are left confused.

Jake Wright of Ardmore says, "I'm uncomfortable with it. I don't think that It's being monitored properly."

While Jeffrey Levinson of Wynnewood says, "I think there's limited voter fraud, but I do think getting people concerned, scaring people, creating that fear will probably affect some people."


Kim Carter of Havertown applied for a mail-in ballot and received an email that said her application was denied because it was a duplicate.

"it makes me confused and I just want to talk to someone to clarify what this means so I can vote in the election," Carter said.

RELATED: How to check the status of your mail-in ballot
EMBED More News Videos

Election Day is two months away and voters across the Delaware Valley are thinking about how they'll cast their ballots.

David Thornburgh is President and CEO of the Committee of Seventy, a non-partisan advocacy for good government.


"Parties do what they need to win, but voters don't need to listen," Thornburgh said.
He says mail-in ballots are secure.

His message is to ignore election robocalls.

"Talk to your neighbors, talk to your elected officials, call your county, folks in the city. Make sure that you report them. If you see something say something, but please don't fall for that," Thornburgh said.