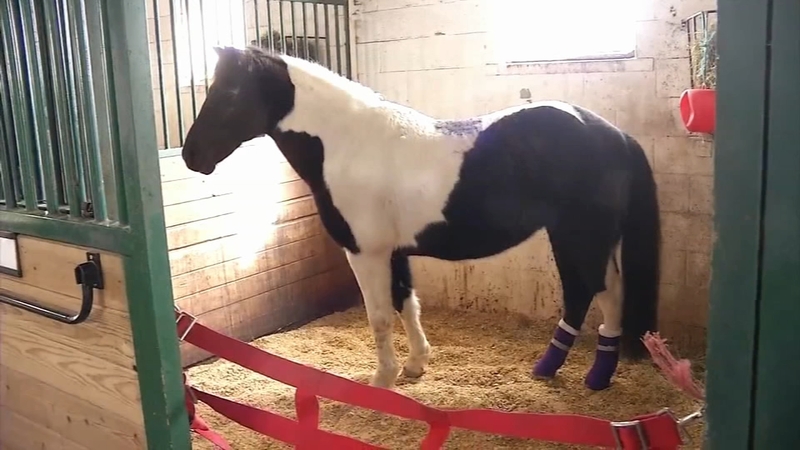 PIKE CREEK, Delaware (WPVI) -- A pony was found with her legs bound at an equestrian park in Pike Creek, Delaware - and it's not the first time a horse was targeted.

The incident happened earlier this week at at Carousel Park & Equestrian Center on the 3700 block Limestone Road.

Carousel Park's Director Mary Devine said it's believed the suspect filled a bucket with grain and walked to the field where Cierra was, and used it to lure the horse away.

A pony named Cierra was left with cords tied so tight around her ankles, the animal couldn't walk.

"They were so tight that the staff had a difficult time cutting them off. Once they cut them off, it relieved some of the pain for her," Devine said. "It's a pretty painful experience. When they were able to relieve that, she was able to move."

Cierra's stable mate Tegan was also a victim of similar abuse. She was found with rope tied around one ankle in the pasture one morning in September.

One thing that might make the horses at Carousel Park vulnerable is that they are trained to work with children.

"We teach our horses to be docile and quiet. We have small children that are often working with them, so we want them to give up their hoof when we ask for it. So all of our horse have been trained very well to lift their legs," Devine said.

"This is a cruel, willful and intentional act and we are shocked someone would try to hurt one of our beloved animals," county officials said in a Facebook post.