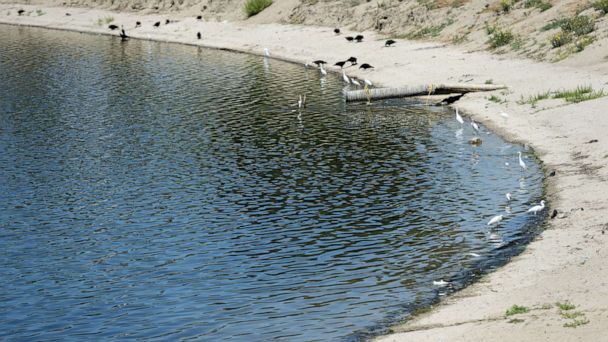 A potentially harmful chemical has been found in drinking water systems that serve about 7.5 million California residents, according to a report by a nonprofit environmental organization.

Variants of the chemical PFAS, nicknamed the "forever chemical" because it does not break down once released into the environment, have been detected in water sources for 74 communities within the Golden State, a review of the latest state data by the Environmental Working Group found.

"Very low doses" of PFAS in drinking water have been linked to an increased risk of cancer, reproductive and immune system harm, liver and thyroid disease and other health problems, according to the organization.

All of the findings in the water sources from the California systems exceeded 1 part per trillion (ppt), which is the safe level recommended by the independent studies endorsed by EWG, according to the report. More than 40% of the systems contained at least one sample with a level of total PFAS over 70 ppt.

The utilities with the highest level of PFAS were found in the southern part of Camp Pendleton, the Marine Corps base in San Diego County, where 820 ppt for sever different PFAS chemicals was measured in a single well in 2017, according to the report.

High amounts of PFAS were also found in water systems in Corona, Oroville and some Sacramento suburbs.

The testing has been done every year since 2013, when the U.S. Environmental Protection Agency ordered nationwide sampling for PFAS.

"Maximum detection levels reported to the California State Water Board and the EPA are a snapshot of what was in the water when it was tested, not necessarily what is coming out of taps now," the report states.

While PFAS has contaminated communities all over the country, the "crisis has been under the radar in California" until now, Tasha Stoiber, a senior scientist at EWG and the lead author of the report, said in a statement to ABC News.

"PFAS pollution in California is much more widespread than we knew," Stoiber said.

Nationwide, PFAS has been found in more than 800 communities, military bases, airports and industrial sites, but the EPA has not set a national legal limit for PFAS in drinking water supplies, the report states. "The only way to tackle this contamination crisis is for Congress to act," Stoiber said. "Tougher laws and regulations are essential."

Major sources of PFAS include foams used to fight fires, industrial discharge of PFAS into the air and water, and PFAS in food packaging and other everyday consumer products.

The family of chemicals includes Teflon and Scotchgard and is also found in cookware and fabric treatments, Stoiber said.

"PFAS are used in hundreds of everyday consumer products and commercial applications," she said. "Decades of heavy use and unregulated production have resulted in contamination of water, soil and the blood of people and animals in the farthest corners of the world."

PFAS is "notoriously persistent" in the environment and human body, Stoiber said. The chemicals can build up in the blood and organs and are present in nearly all Americans who have been tested, according to the Centers for Disease Control and Prevention.

While PFAS includes a category of more than 10,000 chemicals, most of the research about health effects is on two legacy types of PFAS -- PFOS and PFOA -- which are no longer used.

Not much is yet known about the newer types of PFAS.

The California Department of Public Health did not immediately respond to ABC News' request for comment.