Farmer rescued after falling into grain bin in Burlington County 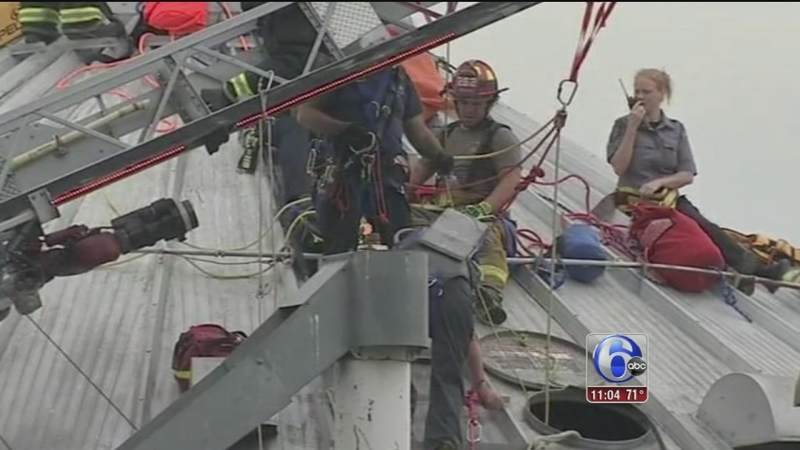 CHESTERFIELD TWP., N.J. (WPVI) -- Crews rescued a 71-year-old man after he fell into a grain bin on a farm in Burlington County.

Action News was there as Chris Probasco was wheeled, bearing a smile, into an ambulance to be taken to Capital Health Regional Medical Center.

The incident happened around 2 p.m. on Probasco Farm at 89 Sykesville Road in Chesterfield Township, New Jersey.

Chopper 6 was over the scene as emergency crews, hoisted by ladder trucks, worked to free the farmer.

"This is probably one of your worst situations because you're working with an unstable substance," said Chesterfield Township Fire District 2 Chief Kyle Asbrand.

In an operation that took three hours, crews were lowered into the silo from its roof.

They couldn't safely pull Probasko from the grain because of the extreme pressure.

"He wanted out. He just wanted out. And unfortunately there's no quick way for us to get him out due to the grain around him," said Asbrand. "We had to encapsulate him to the waist. That way we could get all the grain out so we could pull him out."

"It's very dangerous. There's several people who have lost their lives on it," said neighbor Bill Bibus.

Farmer Bibus tells Action News, the lifelong farmer was likely clearing a clog in a drain when he fell.

"If you're on top trying to poke it through, it could break loose, and then you fall through," said Bibus.

Officials say a farm worker nearby pushed the stop button, preventing Probasko from sinking any further.

Once freed, Probasko climbed out himself. His wife gave a thumbs up from the front of the ambulance.

"He was on a stretcher and waved to everybody, and he look like he was more embarrassed than anything else," said Bibus.

Probasco has been treated and released.

He told Action News by phone he feels just fine, and wanted to thank all the first responders who got him out of what he called his debacle.