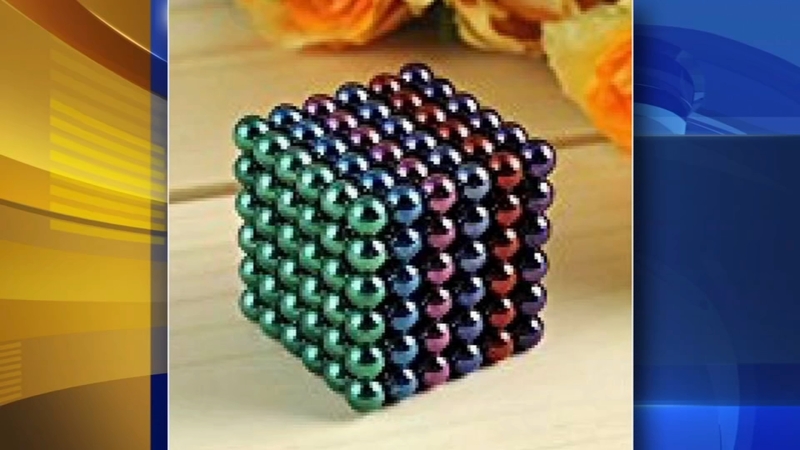 PHILADELPHIA (WPVI) -- A Philadelphia mom has a warning about a popular toy your child may have received this holiday season.

She says the toy caused her son to have emergency surgery.

They are very appealing to kids.

And while they can be fun to play with, Sara Cohen says if you have these in your home, get rid of them immediately.

She says her son ended up in the hospital three years ago.

"These are extremely dangerous, they're so strong that they can tear through someone's intestines," says Cohen.

Cohen is talking about tiny, but powerful magnets marketed and sold on Amazon and elsewhere.

Cohen's son swallowed two of the magnets when he was 7 years old.

Cohen showed Action News the surgical pictures of the holes created in her son's intestine.

"And in between the two magnets was three loops of bowel that had been impinged that were in the way," she said.

These products were banned by the Consumer Product Safety Commission in 2012, but manufacturers appealed and a federal court lifted the ban four years later.

"There are estimates that over a 10 year period, over 22,000 people ingested magnets and suffered injuries," said Daniel Mann, an attorney with the Feldman Shepherd law firm.

"It is startling and that's why parents need to pay attention," he added.

And since the ban was lifted, problems are skyrocketing.

The country's poison control centers are reportedly on track to record six times more magnet ingestions this year than in 2016.

"The surgeon told me that there are teenagers who have these ingested. They use them as fake nose piercings, and then they get swallowed," says Cohen.

We reached out to the manufacturer of the product the Cohens bought.

We have not yet heard back.

But we did talk to Shihan Qu, the head of Zen Magnets, who was instrumental in getting rare-earth magnets back on the market.