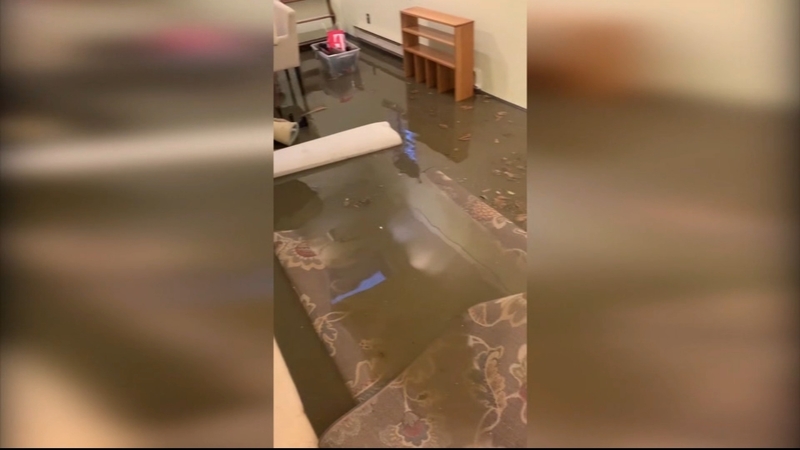 PHILADELPHIA (WPVI) -- Several residents in the Manayunk section of Philadelphia reported raw sewage and stormwater flooding as a result of construction by the Philadelphia Water Department.

The department is in the middle of a nine-month project to replace water and sewer lines in the area.

"This is definitely one of our older neighborhoods, there's a lot of hills, we try to replace this stuff before it breaks so that's why we're there," explained department spokesperson Brian Rademaekers.

Emily Dinda and her roommates live along Mallory Street in Manayunk and were in for a rude awakening as storms dumped nearly an inch of rain Thursday night.

"One of our neighbors had like five inches of raw sewage in their basement," said Dinda. "We were doing laundry and our basement just smelled disgusting, like our whole house smelled gross, like the street is completely flooded."

RAW SEWAGE: Residents in Manayunk along Mallory Street say ongoing construction and the rain led to RAW SEWAGE, flooding in their basements and backyards @6abc pic.twitter.com/8Hs88DuVbv

Resident Shannon Halligan said the construction and the rain resulted in her basement flooding for the first time in seven years. She also said it led to some major inconveniences for drivers.

"A car came down the street and their tires went into the ground and was being held up by the front bumper and they had to get a tow truck," said Halligan.

Rademaekers reported six homes had backed up stormwater on their properties.

"Infrastructure is under construction and we had a huge downpour last night and essentially it was a really bad time for Mother Nature to open up in that area," said Rademaekers.

Rademaekers said the department is investigating the sewage issue as it shouldn't have happened, meaning there was a cross-connection between the water and the sewer line.

"When that surge of water came through, it pushed back some of the wastewater that was on their property and flooded into their yard," said Rademaekers.

But Dinda said the city should be doing more to protect its residents.

"People get sick, someone can get an infection, that is not safe," said Dinda. "It's not fair to the homeowners who invested so much time and money into these properties that they're really proud of, damaged over something they have no control over."

The construction project began around December 2020 and is estimated to be completed in September 2021.

Per Philadelphia Water Department: This particular infrastructure upgrade will take place on these blocks: