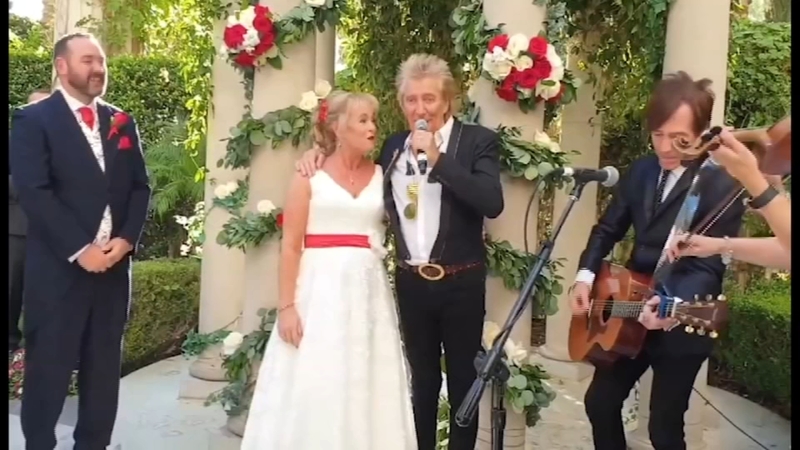 Rod Stewart crashes couples Vegas wedding, serenades crowd with Have I told you lately and tickets to his show

LAS VEGAS, Nevada (WPVI) -- A British couple's wedding went from a veritable nightmare to a viral dream, complete with a surprise performance from Rock and Roll Hall of famer Rod Stewart.

The viral moment was captured and shared via Storyful.

Sharon Cook and Andrew Aitchison thought their wedding at Caesars Palace Las Vegas was in jeopardy after the collapse of Thomas Cook travel agency on September 23. But Caesars, along with some help from Delta Airlines, came to the rescue.

The couple and the entire wedding party were given complimentary flights from Delta.

The hotel gave the newlyweds the ultimate wedding gift by organizing a surprise performance from the British song legend.

The couple had long envisioned a Vegas wedding and had been planning the event for years. But the Thomas Cook travel agency collapse put that all in jeopardy, devastating the couple.

Aitchison tweeted on Sept. 27 that he had received a phone call from Caesars Palace telling him they wanted to lend some assistance and to expect some surprises.

The biggest came in the form of Stewart, who walked out during the ceremony to acknowledge the couple's hardships before launching into hit song "Have I told you lately" and providing the entire wedding party with tickets to his upcoming show.

"Thank you Rod you've absolutely made our dream wedding you absolute legend. We can't wait to see you Friday," Aitchison later tweeted.

So @rodstewart just turned up at our wedding and sang to my wife! I can’t believe what has happened in the last week and this has just topped it off. Thank you Rod you’ve absolutely made our dream wedding you absolute legend. We Can’t wait to see you Friday #LikeACaesar #SirRod pic.twitter.com/xIv9QmJhnD