Local members of Ukrainian, Russian communities worry attack could be near

The U.S. warns Russia could invade Ukraine any day, but President Joe Biden says a diplomatic solution is still on the table.
WPVI
By TaRhonda Thomas 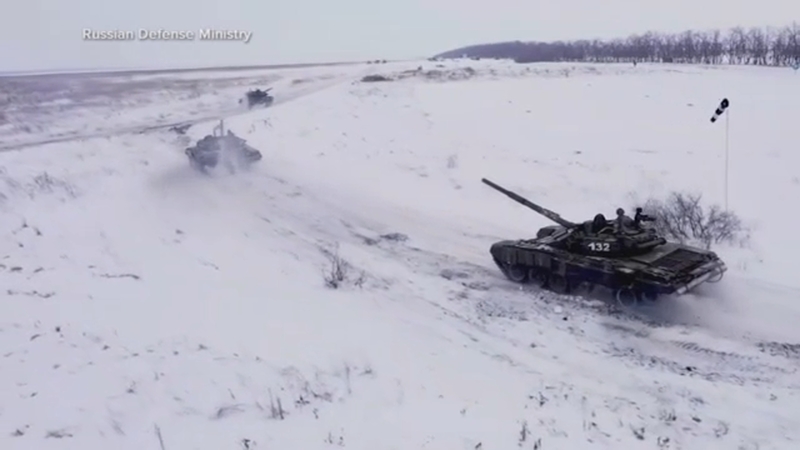 Local Ukrainian, Russian community worry attack could be near

PHILADELPHIA (WPVI) -- As he loads green grocery bags into his car, Taras Grosh is particularly excited about two of the items he's bringing home.

"These are the things I had as a kid," he said while holding two pre-packaged vanilla ice cream cones made by a company in his native Ukraine.

Grosh was born there and came to the U.S. when he was 7 years old.

Bell's Market on Bustleton Avenue is one of the few places he can find the treats since the store caters to both Ukrainian and Russian residents. Northeast Philadelphia is home to a large population of both.

The international influence of the area is also a reason why so many people there are invested in what happens as Russian troops continue to position themselves along the borders of Ukraine.

"I still have grandparents who are in Ukraine," Grosh said, adding that they live in the central part of the country but are so used to threats by Russia that they are going on about their daily lives. His concern is for Ukrainian troops.

Russia says it is pulling back more troops and weapons. That's another gesture apparently aimed at easing fears that it is planning to invade Ukraine.

"When Putin grabbed Crimea I thought what's going to be the next step? He's going after more and more," said Grosh.

It's a concern David Davudov shares even though he is from Russia.

Philadelphia's Honorary Consulate to Ukraine is even affected by the rapidly-changing situation, which has seen tensions ramp up in the past two days.

"When I wake up, I'm afraid to open the news," said Iryna Mazur, Honorary Consul of Ukraine to Philadelphia.

The concern is only made better by the support Ukrainian Americans have gotten from members of the local Russian community.

A Russian tank amass at the Ukranian border, President Biden was steadfast in his committment in using diplomacy to defuse the crisis.

"Every reasonable person, it doesn't matter where they come from, realizes that what the Russian government does is actually inhumane," Mazur said.

Under threats from Russian forces for the last eight years, she says people in Ukraine are ready to fight.

"Ukrainian people are willing and capable to defend their land," she said

They just hope it doesn't come to that.

It's the type of hope that keeps people coming into the Office of Universal Travel, which is not far from Bell's Market. The business serves as a travel agency as well as a place where people can ship goods to countries including Ukraine and Russia.

On Wednesday afternoon, one woman came in to ship a large box, stating it was filled with clothes and shoes for her family in Russia.

At the same time, Victor Makshyshyn, who is from Ukraine, was sending money to his grandmother who lives in the western part of Ukraine.

Signs inside the business are printed in both Ukrainian and Russian, as the agency helps the few people trying to travel to those areas right now.

Paul Poast, a nonresident fellow on foreign policy and public opinion at the Chicago Council on Global Affairs, discusses the Russia-Ukraine crisis.

"You can never believe anything said by the Russian government," said Mazur.

Pennsylvania Congressman Brian Fitzpatrick, who is co-chair of the Congressional Ukrainian Caucus, is among the lawmakers who introduced a bill calling for sanctions against Russia right now.

On Sunday, busloads of people will travel from Philadelphia to Washington, D.C. to show their support for the legislation and for Ukraine.

The U.S. warns Russia could invade Ukraine any day, but President Joe Biden says a diplomatic solution is still on the table.

It's something Grosh hopes will happen instead of an invasion.