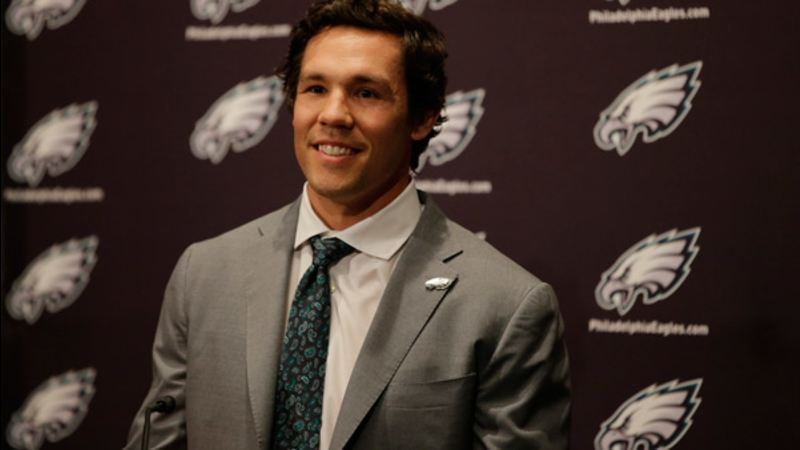 With those words, Sam Bradford took to the podium Wednesday afternoon in his first press conference since being named quarterback of the Philadelphia Eagles.

"I'm happy to be an Eagle and I'm ready to get to work," Bradford said.

In a quarterback swap, the Eagles traded Nick Foles to the St. Louis Rams for Bradford on Tuesday. It was a move that shocked many Eagles fans.

However, Bradford admitted he knew his arrival to Philadelphia was in the works for some time.

"It didn't take me totally by surprise yesterday," Bradford said, adding, "I knew this was a possibility probably three, four weeks ago."

With fellow quarterback Mark Sanchez signed to a two-year deal, the starting quarterback role is up for grabs. Bradford says he doesn't want anything handed to him and wants to earn the position.

"My main goal right now is to get healthy, and once I get healthy, to start learning this offense," Bradford said.

The former Ram said the timetable for him to be 100% is up in the air right now, but he says he will be ready for training camp.

"I'd be lying if I said I wasn't going to be a little nervous the first time I stepped on the field. I think anyone who has gone through what I've gone through would be a little nervous to step back on the field. But I'm sure once I get out there, and the bullets start flying, when I take that first hit, I'll probably shake it off and I'll be just fine," Bradford said.

The former No. 1 overall pick and 2008 Heisman winner says he understands the apprehension of those worried about the trade, but is looking forward to proving those doubters wrong.

"I don't think anyone should be worried. Once they see me on the field and they see how hard I'm going to work to get back, I think all those doubts will be gone from their minds," Bradford said.

As for his new head coach Chip Kelly, Bradford is excited to work in his system, one he says that is quarterback friendly.

"I think any quarterback in this league would love to play for Chip and his offense," Bradford said.

Bradford said he is "absolutely" trying to recruit Murray for the Eagles.

"I've been trying my hardest. I called, texted, I've done everything. I think if we can somehow land DeMarco, he'd be a great pickup. Not only is he a great player, he's a great person," Bradford said.

As for now, Bradford says he is just focusing on getting healthy and making an impact.

He said he knew all along Philadelphia was the place he wanted to be.

Bradford said, "It's going to be a fun ride."

And that ride is just beginning.