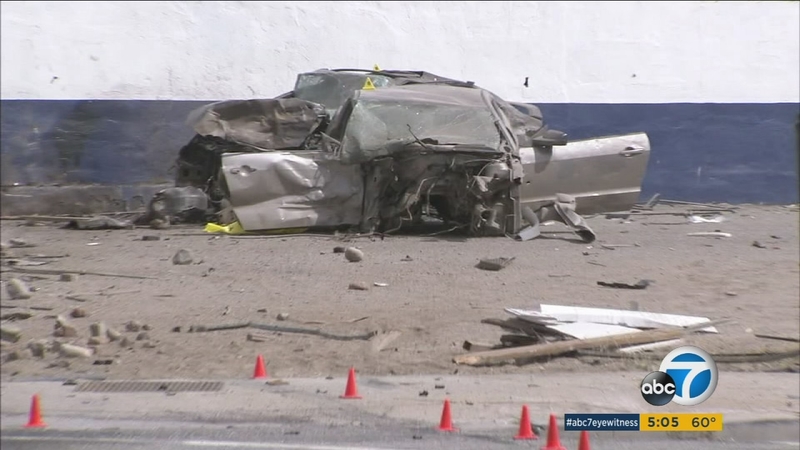 SAN BERNARDINO, Calif. -- Two people were killed Monday when a driver with a suspended license fled a sheriff's deputy at speeds up to 100 mph, blew through a red light and smashed into a Mustang at a San Bernardino, California intersection, officials said.

A 26-year-old father of two on his way to work in the Mustang was killed, as was the driver of the Honda Civic that was fleeing the deputy.

Authorities say the incident began just before 5 a.m. when a San Bernardino County Sheriff's Department deputy tried to pull over a Honda Civic that was driving erratically. Instead of pulling over, the Honda sped off, leading the deputy on a chase that at times hit 100 mph.

The deputy pulled back and turned off the lights and siren when the chase seemed too dangerous, officials said, but the Honda continued to accelerate.

The Honda blew through the light at Mount Vernon and Rialto avenues and smashed into a Ford Mustang, sending both cars careening into the brick wall of an automotive business.

Car parts and debris were left scattered all over the street. The impact was so violent that the engine from the Mustang fell out into the middle of the street, authorities said.

Sheriff's officials identified the Honda driver as 30-year-old Rudy Javier Vargas, and said he was driving on a suspended license and had some outstanding warrants.

"They would have been very minor warrants to take care of," said San Bernardino Police Department Lt. Rich Lawhead. "But they may have been a reason why that driver fled."

The passenger who died in the Mustang was identified by his fiance as Alex Peyro.

The Mustang driver was expected to be released from the hospital later Monday.