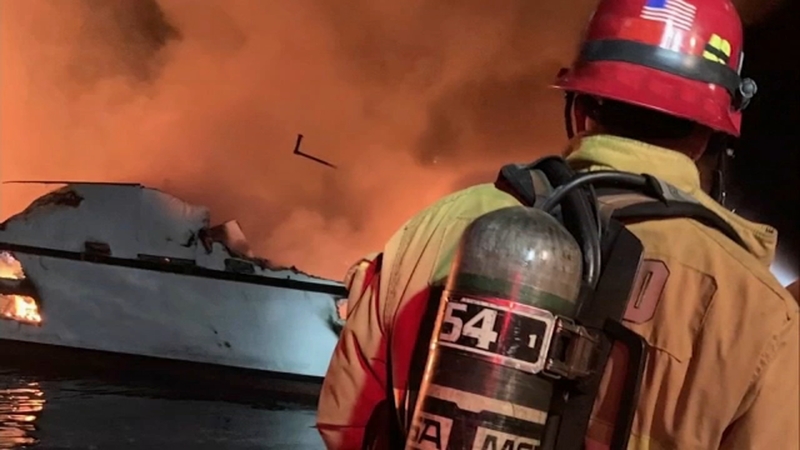 SANTA BARBARA, Calif. -- Investigators who examined the wreckage of the scuba-diving boat Conception have not been able to determine the cause of a fire that killed 34 people off the Santa Barbara coast, officials said Friday.

Teams from the FBI and the Bureau of Alcohol, Tobacco, Firearms and Explosives spent two weeks reviewing what remained of the vessel.

Santa Barbara boat fire: Owner says crew 'had no choice but to evacuate the boat'

An official with knowledge of the investigation said parts of the boat have been sent to labs for additional testing. There is no indication anyone intentionally set the Sept. 2 fire.

All six crew members were asleep when the fire broke out in the middle of the night and trapped those sleeping in bunks below deck.

Boats like the 75-foot Conception are required to have a crew member keep watch at night.

A recreational scuba diver recounts his experience on the dive boat that burned off the coast of California and shared cellphone video from inside.

The FBI is looking into possible criminal charges that would likely focus on an obscure federal law known as the seaman's manslaughter statute.

With the boat propped up by braces and scaffolding, investigators wearing protective suits walked over planks to inspect and document the burned vessel at Port Hueneme. Authorities also will examine hundreds of documents seized from the boat's owner, Truth Aquatics Inc.

Truth Aquatics preemptively filed a federal lawsuit under a pre-Civil War maritime law that shields boat owners from monetary damages in a disaster at sea.
Coast Guard records show the Conception passed its two most recent inspections with no safety violations.