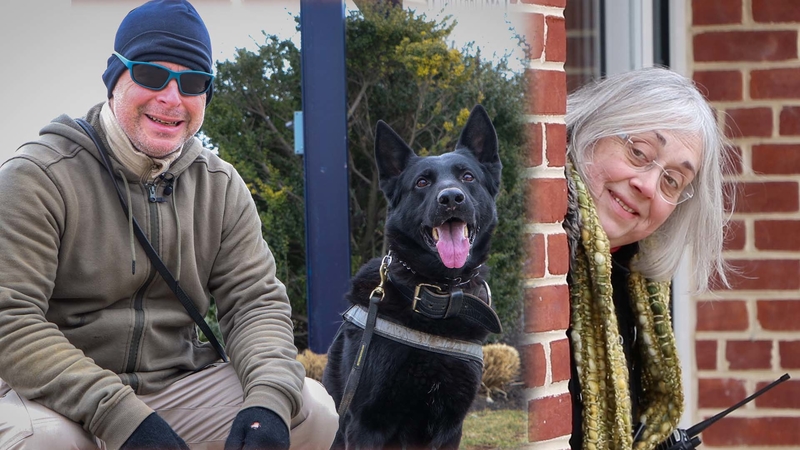 PLYMOUTH MEETING, Pennsylvania (WPVI) -- "We love our dogs," said Frank Scarpello. "They're here for a purpose. And these guys work."

Scarpello has been leading a team of hobbyist search and rescue dog trainers for roughly three years. But he didn't realize the potential of working dogs until a fateful moment with his own pet.

One winter, Scarpello's dog, Bella, picked up a scent and followed it to his neighbor.

"I was like, 'Wow, this dog really has talent'," he said. "So, I just started training with her and that's led to this."

Most every Saturday, Scarpello and friends gather at different locations to orchestrate search and rescue missions with their dogs. Today, they met at Plymouth Whitemarsh High School.

The handler and their dog hide while someone volunteers to get 'lost.' By sniffing an article of clothing or a personal item, the dog will track down the 'lost' person in minutes.

But Scarpello said it was getting too easy for the pups.

"The dogs keep following the same people, the same people. The training diminishes, so we need new scents and new people to do things," he said. "And my wife suggested I put an ad out."

Scarpello's post on the Nextdoor app asked for volunteers to introduce new odors to the dogs.

"I had 70 responses. It was overwhelming," he said. "And so far, we've had five new people every week. They're out here laying trails and waiting for a big dog to come and find them."

Neighbors and strangers were equally enamored with the idea.

"I thought, well, I love animals and I'm close by, so I'm going to try it," said Barbara Chaapel, who wanted to help a dog learn to help someone else.

"A child, an older person with Alzheimer's, you don't know," she said.

As much as it helps the dogs, it also helps volunteers get out of the house and do something fun.

"I'm playing hide and seek with a dog," said Estella Clifford. "I'm retired and I thought this is something that I could do as a volunteer."

Scarpello hopes the recent surge of interest will propel their grassroots organization forward.

"Right now, it's a hobby group. We have dedicated people that are coming out and they enjoy it," he said. "But if we have two or more of our dogs get titled, we would want to be a search and rescue group for this area here."

Scarpello worked closely with Eastern States Working Dog Association to get the proper training. Among the group, three dogs are professionally titled. However, they are not yet an official emergency response team. Anyone looking to report a missing person should immediately contact law enforcement.

The team is hoping that more local establishments would offer their large spaces to mix up training grounds. New volunteers are not immediately needed but are welcome to participate. To get involved, contact Frank Scarpello at BellaHeroManTrailing@gmail.com

Dr. Emily Dozeman and her team created a new emergency hospital to meet the needs of pets across the tri-state area.