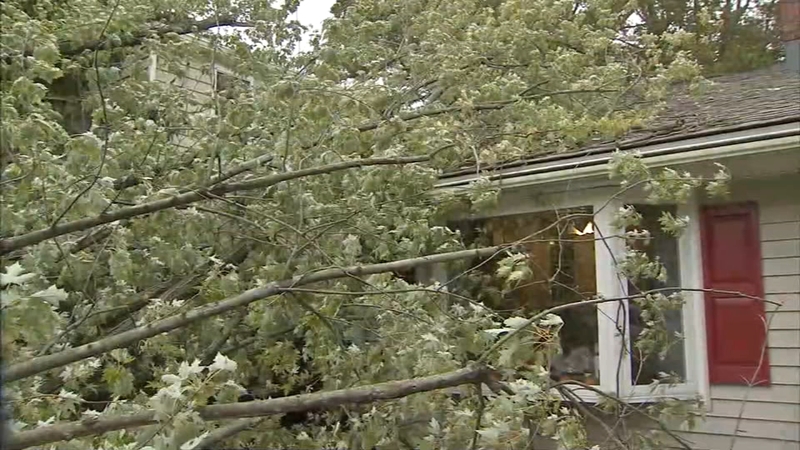 MORRISVILLE, Pa. (WPVI) -- Strong winds were not kind to this Morrisville neighborhood in Bucks County. Around 11am, residents say a strong gust knocked down a tree along West Trenton Avenue.

Carl Vitale rents one of the homes impacted and got a call about the damage.

"I was like, 'Wow.' Half the tree was still up. The other half fell like an hour or so later," said Morrisville resident Carl Vitale.

His neighbor next door didn't want to talk but admits she was shaken by the huge tree coming down. A fence took the brunt of the damage and both homes seemed to have been spared any real impacts.

"Fortunately, we got lucky and nobody got hurt," said Vitale.

Those living nearby say with the high winds, they were not surprised to this tree come crashing down they are thankful more didn't come down with it.

"They have come down. They've crashed our pool. They have crashed our fence. We are in the middle of dealing with that too. I just kept looking around seeing where the trees are falling next," Denise Guerriero of Morrisville.

At this point, it's not clear what property line the tree belongs to but crews are ready to remove it.

"Poor neighbors, because they literally just moved in this year and the corner neighbors as well. I hope they have good homeowner's insurance," said Guerriero.

Residents say the tree has been here for decades and it was only a matter of time before Mother Nature brought it down.