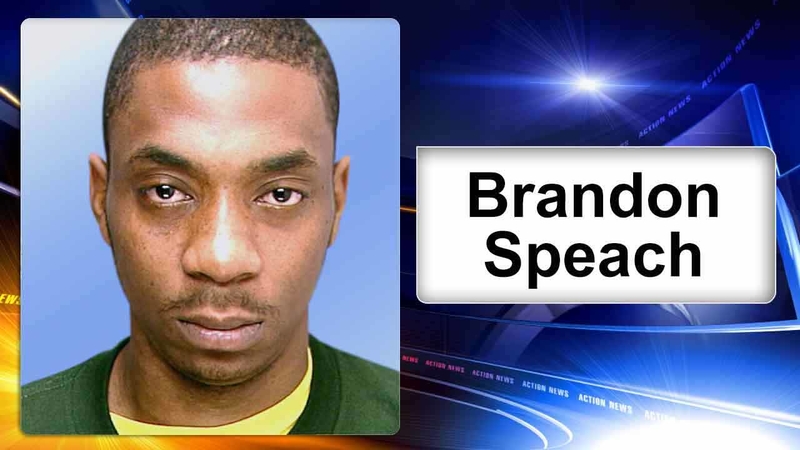 PHILADELPHIA (WPVI) -- A mother says she was shocked to find out the man who has been staying at her home and babysitting her children is accused of posing as a woman online in order to get nude and explicit photos from underage boys.

The mother, who didn't want to be identified, choked back tears Thursday night as she relived the moment she discovered she had left her kids home with a wanted man.

She's a mother of nine, works seven days a week, and it was while at work when Brandon Speach's mugshot was aired on TV that she realized her children were home with an alleged criminal.

"I was racing home, calling the cops, telling them what happened and that was the guy that's in my house. He's my nanny. He's my babysitter," the mother said.

A mother says she is shocked to find out the man who has been babysitting her children is accused of soliciting nude images of teenage boys.

Speach is facing sexual abuse charges, among other related charges, for allegedly posing as a woman on social media to solicit nude images of teenage boys.

Detectives say Speach was active online for four years, targeting boys between the ages of 14 and 16.

"He gained my trust because he was working at Duckrey Tanner School," the mother said.

In a statement, which can be read in full below, the nonprofit tells Action News they're "shocked and deeply troubled" by the allegations and reassured parents "all our employees, even part-time...are required and successfully complete a comprehensive federal and state background check."

"I'm his grandmother and I don't want to talk," she said.

"You would never expect it for someone that's from your neighborhood, that you grew up with," Jason Hardy of North Philadelphia said.

"He never did anything to my kids. I question my kids all the time, he never did nothing wrong to my kids," Sonjah Thrower of North Philadelphia said.

The mother of nine said if she could ask Speach a question it would be: Why me?

"Why me? Why me? You had my trust, you had my kids' trust, I never thought it could be you, you never showed me any signs," the mother said.

EducationWorks says Speach has been fired from his position.

Full Statement from EducationWorks:
The welfare and safety of the children entrusted to our care is of paramount importance to our organization, and we were shocked and deeply troubled to learn about the details of these allegations.

All of our employees, even part-time employees like the individual in question, are required and have successfully completed a comprehensive federal and state background check before they can work with our children.

We are cooperating fully with law enforcement authorities, but this remains an active investigation and we therefore are unable to discuss the matter in detail. We can confirm that that this individual was a part-time employee with our organization, and that he has since been terminated as a consequence of this investigation.
Related topics:
child abusephilly newssex abusenude photos
Copyright © 2022 WPVI-TV. All Rights Reserved.
TOP STORIES
Police: Body found inside trunk of burned vehicle in Fox Chase
Police: Another woman killed by hit and run driver in Germantown
Police investigating after security guard shoots man in Rhawnhurst
AccuWeather: Clearing, Less Humid
Hard Rock deal ends casino strike threat in Atlantic City
Uvalde school police chief resigns from city council
Organizers finalize preps for America Independence Day Parade
Show More
Penn's Landing fireworks event canceled due to inclement weather
Police: Man charged with fatally stabbing 56-year-old in Roxborough
Police: Man extremely critical after shooting in West Philly
Police: 19-year-old killed in Kensington double shooting
Pedestrian struck and killed in Atlantic City
More TOP STORIES News