It happened around 10 a.m. on the 3600 block of Market Street in University City.

Police believe the suspects were waiting for the Garda truck to make its stop at the PNC ATM on the corner of 36th and Market street.

Chopper 6 was over the scene of a robbery at 36th and Market in Philadelphia on August 1, 2019.

As one guard approached the machine with black duffel bags of money, police said a masked man pointed a long rifle at him.

Another suspect approached with a handgun demanding the bags of cash.

Authorities said that's when the second guard in the armored truck fired towards the men. It was enough to make them scatter, dropping the bags of money and their weapons.

One of the suspects fled on foot eastbound on Market Street.

The second suspect got into a maroon Chevy Trailblazer and went northbound on 36th Street. Police believe the car had at least one additional person inside. 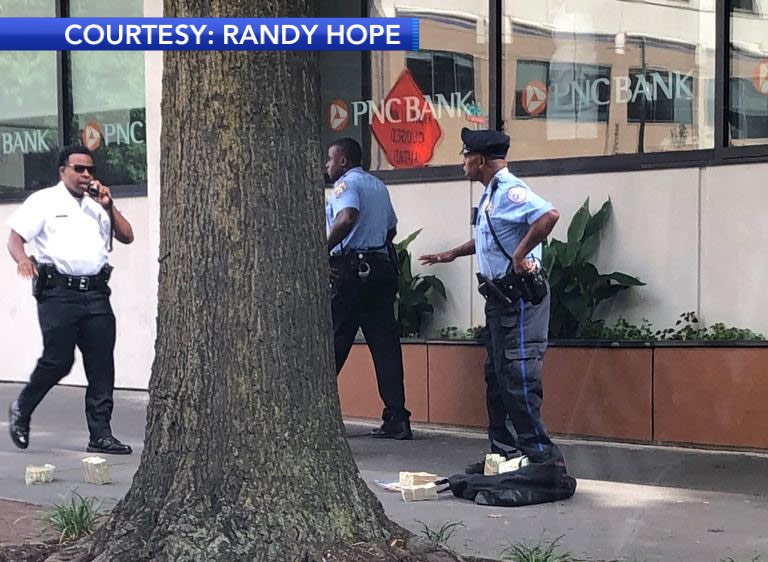 Pictured: The scene of an armored car robbery at 36th and Market in Philadelphia on August 1, 2019.

The second suspect got into a maroon Chevy Trailblazer and went northbound on 36th Street. Police believe the car had at least one additional person inside.

Christine and her sister were standing less than 100 feet from the scene. "We both dove for cover. She went one way, I went the other. I couldn't find her and that was very terrifying, very terrifying. There was a lot of bystanders at that point in time and people were running," she said.

A gun was recovered with one of the bags along with an assault weapon clip containing 40 to 50 rounds, police said.

Police are checking local hospitals in case the suspects were injured and seek treatment.

Both Penn's and Drexel University's Departments of Public Safety issued alerts about the robbery.

Police said there is a lot of video in the area they will review to help them find the suspects.

The robbery happened at a busy corner, luckily no innocent bystanders were hurt.

Niema Bell works at the Dunkin Donuts across the street, "Stupidity. Strictly stupidity. The location, it was scary. Everyone is just trying to get to work and have a normal Thursday and it was impossible with that going on."
Report a correction or typo
Related topics:
university city (philadelphia)university of pennsylvaniaphilly newsshots firedshootingdrexel universityarmed robbery
Copyright © 2020 WPVI-TV. All Rights Reserved.
More Videos
From CNN Newsource affiliates
TOP STORIES