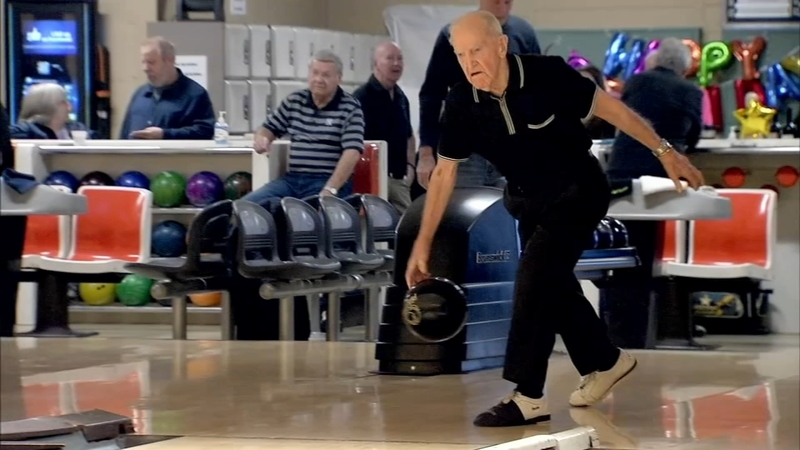 EWING, New Jersey (WPVI) -- Most beginner bowlers may be lucky to break 100 on the scorecard, but one well-known local bowler is doing that and much more at 100 in the age column. His loved ones helped him celebrate this milestone birthday at their family's bowling alley in Ewing, New Jersey.

"In 1939 my father put these first eight lanes in. I worked for him for a year and he sold me the business. I bought the bar in '55, it was a next door neighbor's bar, and added four more lanes in 1958. It was a joy, but a lot of hard work, a lot of hours. But I enjoyed it, I enjoyed meeting people," said Lew Slocum, owner of Slocum's Bowling Bar and Grille.

Lew's son, Chip Slocum, says his family has owned the bowling center for 83 years and counting.

"Truly is amazing, he's in good shape, good health," said Chip. "Military has something to do with it. He has a regiment everyday. Setup his plate, breakfast plate and stuff. Puts on his collar shirt, dress pants, has his breakfast and on about his day."

Bowler Larry Ditullo says it's a blessing to have Lew around.

"He's been bowling so long that basically it's like breathing. He keeps his balance, throws the ball. Looks like professional. He is a professional," he said.

"He's more than a teammate, but he coaches me even. He's such a good bowler, he really made me a better bowler. He does amaze me for 100 years old, I mean, to be in his shape, he does amaze me," said bowler, Ron Eget.

Chip says his father shows him everything and still does it all at 100 years old - even still telling him what to do.

"For what it's worth, I give him pointers, yes," added Lew.

To celebrate Lew's 100th birthday, the United States Bowling Congress congratulated him with a special pin as a sign of their appreciation.

Lew says he has a 157 average score so far this season and just a week ago bowled a 202, so there are no signs he'll be stopping any time soon!

According to Chip, 299 is the highest bowling score Lew has ever played.