Snakes showing up in Australian toilets in search for water 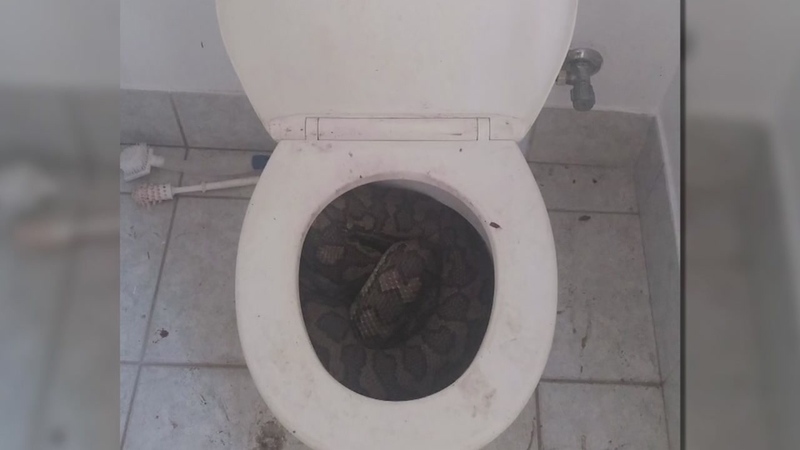 Snakes in a toilet

QUEENSLAND, Australia (WPVI) -- Here's probably the last thing you want to see when you need to go to the bathroom: A snake in your toilet!

It's happening all too often at homes in northern Australia. Snake catcher Elliot Budd told the ABC he's responded to at least two of the calls.

The first was a nearly 10-foot-long snake found in a downstairs loo. A week later, he got another call.

"At first I thought it was a friend having a go at me but she was very serious about it," Budd told the ABC. "I went out and there was a snake curled up in the toilet."

Budd says the second snake was already about halfway down the pipe when he got there. He had to do some coaxing to get the snake out.

Other pythons have been found in kitchen sinks, drain pipes and other areas where water dwells. Wildlife experts expect there will be even more sightings in the coming weeks as that part of Australia faces a major drought.

"Over the next little while as it gets drier and drier - and we're not expecting much of a wet season - I expect that you may find snakes in many more wet places than you usually do," said eptile expert Professor Lin Schwarzkopf.
Related topics:
sciencesnakeu.s. & worlddrought
Copyright © 2022 WPVI-TV. All Rights Reserved.
TOP STORIES
Visitors fill the Jersey Shore for Memorial Day weekend
Police: Triple shooting leaves 1 dead in West Oak Lane
One man dead after West Philadelphia shooting
AccuWeather: Sunny & Pleasant Sunday
Officials ID 5 killed in Pottstown explosion; most were children
Official admits police made 'wrong decision' in TX shooting
Victim of elementary school attack says it could have been prevented
Show More
Police: Store owner robbed, assaulted with brick in North Philly
Dann Cuellar retires after 34 years at Action News
Another Trenton, NJ firehouse hit by gunfire
Rainy start to Memorial Day weekend at the Jersey Shore
Bank employees help kidnapped woman after she asks for loan
More TOP STORIES News