Behind the wheel: Ride alongside a snowplow driver during the nor'easter

"If you don't mind working and making a difference, this is definitely a job where you want to be," he said.
WPVI
By Matteo Iadonisi 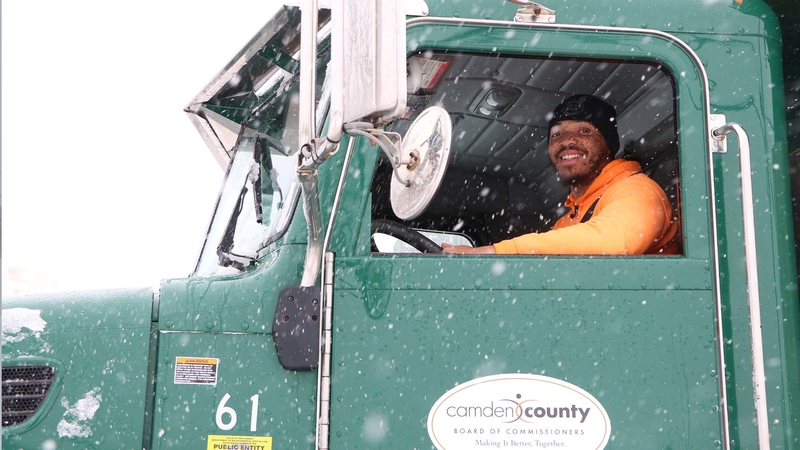 Behind the wheel: Learn what it's like to be a snowplow driver

CLEMENTON, New Jersey (WPVI) -- "This is my home when I come to work," said Shakur McFadden behind the wheel of a snowplow.

McFadden, 28, was born and raised in Camden, New Jersey. Now, living in Voorhees, he works as a Heavy Equipment Operator with Camden County Public Works.

Over the last eight years, he has cut trees and filled potholes. And with every handful of winter storms comes the opportunity to clear the streets of snow.

"I can do this all day every day," McFadden said.

That's hardly an exaggeration. McFadden's workday began the night prior to Saturday's storm and continued sleeplessly until the morning. As snow continued to fall, the end of his shift moved further out of sight.

"Take your little break and you get back to it," he said.

McFadden said the late January snowstorm is among the biggest he has witnessed recently.

"The snow is consistent, but all the windrift and all the snow comes back on the road from it blowing," he said. "It's more annoying than it is hard."

But sometimes, the snow is not the biggest issue.

"What you can see is something that you can deal with," said McFadden. "It's the stuff you can't see, which is the ice. That's the worst part of it."

Snowplow drivers like McFadden encourage all non-essential workers to stay off the road for everyone's safety.

"It makes it easier for us to do our job and for you to not get stuck in weathers like this," he said. "If you're just in the way, that doesn't make my job any easier."

Despite the difficulty of the job, McFadden says it's worth a shot for anyone willing to take the wheel.

"If you don't mind working and making a difference, this is definitely a job where you want to be," he said.

In other snow-related news, Camden County is set to reintroduce their senior and disabled snow removal program in the wake of this weekend's storm. For more information, including eligibility and prerequisites, visit their website.