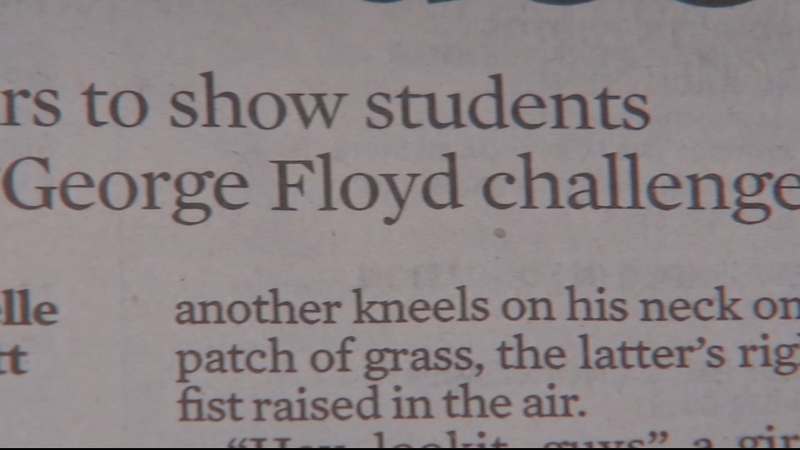 BETHLEHEM, Pennsylvania (WPVI) -- Having led the NAACP's Bethlehem chapter for 30 years, Esther Lee has become a fixture in the fight for racial justice.

A student in the area knew that when she contacted Lee earlier this week to let her know about a disturbing video taken by another student.

"This young woman emailed me," Lee said. "She was frustrated because she tried to contact the administration."

The student sent Lee a video showing a boy who was white kneeling in a patch of grass with his knee on the neck of what looks like a mannequin. He holds his fist in the air while looking at the camera.

"I could not believe it," said Lee. "And this young man with his face he was almost like (former police officer Derek) Chauvin, proud of what he's doing."

It took Lee a moment to recover from the initial shock of the video.

"I looked at it and I thought 'How could you?'" she said. "How could you make a mockery of the life of someone who just died?"

The boy in the video was likely participating in what's come to be known as the "George Floyd Challenge," where people on social media recreate videos of Floyd's final moments as he was murdered by former police officer Derek Chauvin. The challenge started in 2020.

The video forwarded to Lee shows that the challenge has made its way to the Lehigh Valley.

It's not clear what school the boy attends, but according to the Morning Call newspaper in the Lehigh Valley, both Southern Lehigh and Parkland school districts are aware of the video.

Action News tried repeatedly to reach officials at both school districts, but they declined all opportunities for interviews.

Parkland School District released a statement that says in part:

"Videos were shared via parents, students and Safe2Say and investigated this past week by Parkland HS administrators that included disgusting racism. Parkland School District denounces the content that was shared and for every person who came forth with a concern, our high school principal team did respond.

The videos do not reflect the values of our school system.

While we are deeply disappointed if our students are involved in hurtful behaviors toward others, we are limited in how the behavior is addressed if the situation occurred off-campus and on devices that are not district-issued."

The news of the districts not speaking on-camera came as no surprise to Lee.

"I was unable to get through as well," said the 87-year-old of her multiple calls to the districts. Parkland says it was not aware of any efforts by Lee to contact them.
Report a correction or typo
Related topics:
societybethlehempennsylvania newssocial mediaderek chauvingeorge floydrace in america
Copyright © 2021 WPVI-TV. All Rights Reserved.
More Videos
From CNN Newsource affiliates
TOP STORIES