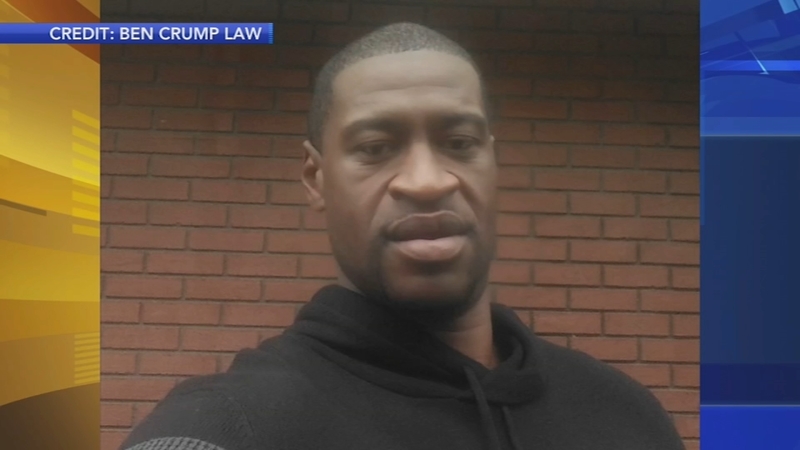 CAMDEN, New Jersey (WPVI) -- Police around the nation and law enforcement experts on Thursday broadly condemned the way George Floyd, who died in Minneapolis police custody this week, was restrained by an officer who dug his knee into the man's neck, saying no circumstances warrant such a dangerous technique.

Deeply disturbing video shot by a bystander shows Floyd handcuffed, lying on his stomach and seemingly subdued as the officer trying to arrest him pressed his knee down on Floyd's neck for nearly eight minutes.

Some police officials and experts said equally shocking was something not seen in the video: Other officers on the scene apparently did not try to intervene even as Floyd repeatedly cried out that he couldn't breathe and moaned in pain.

In Camden, New Jersey, the police and local clergy, literally prayed Thursday evening that no resident will ever have to go through what Floyd did.

Camden County Police Chief Joe Wysocki said, "I'm going to do everything I can to train our officers to have the knowledge and the ability to navigate these situations."

He said what we saw happen to Floyd was a heinous crime.

"I think we watched a murder unfold on video," Wysocki.

"I do believe that'll follow suit very quickly," he said.

The mayor of Minneapolis called Wednesday for criminal charges against the white police officer seen on video kneeling against the neck of a handcuffed black man who complained that he could not breathe and died in police custody.

The local clergy members say Camden stands with their police.

Reverend Chris Collins with Anointed News Journal said, "We want to remind the residents of Camden, New Jersey that we stand together, that we are one family."

Reverend Levi Combs of First Refuge Progressive Baptist Church said, "We don't have to go and resort to insurrections and riots."

Bishop E.M. Barron of High Ground Temple Church of God said, "I say to our young people and to the pastors and leadership in Camden and our mayor we are better together."

"It didn't appear to me there was a need to continue to kneel on his neck, especially the neck area," said Steve Nolan, who has investigated police-involved incidents for decades as a lieutenant within the Philadelphia Police Department's internal affairs unit.

WARNING; GRAPHIC VIDEO: Bridgett Floyd called the death of her brother George "devasting" and "heartbreaking" in an interview with "Good Morning America."

He says justice will happen but it'll take time.

"We're going to have a lot of video so they can look at different angles. They're gonna talk to anyone and anybody who saw a portion of it," Nolan said.

But with four officers around Floyd, Nolan said, "It appeared he was not posing a threat at that point. You had four officers on location, he should have been put into a position to breathe.