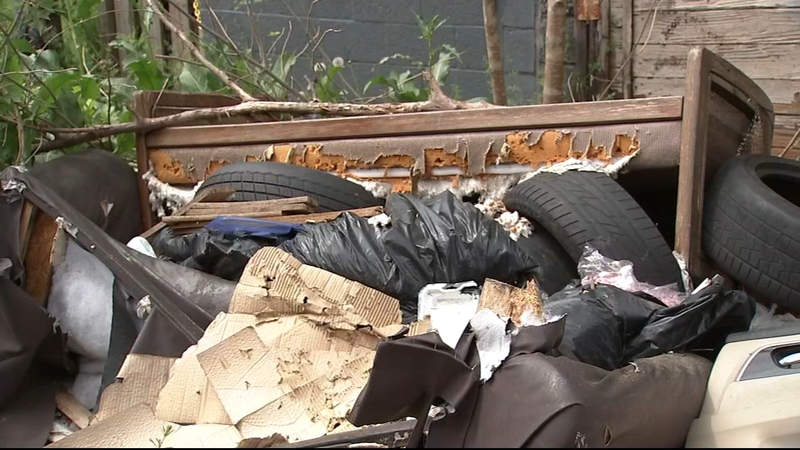 PHILADELPHIA (WPVI) -- The Action News Investigators have received a steady stream of complaints about Philadelphia's 311 system over the years.

Residents like Nannette Carter said they can't get complaints resolved.

Her 92-year-old mother-in-law lives on the 900 block of North 48th Street in West Philadelphia.

The rear of her property is on Moss Street. The area has become an illegal dumping site, including a couch that Carter said has been there for over a year.

"We can't even use the back door," Carter said.

Carter said she's been filing complaints with the city's 311 system to clean it up since 2019.

"I dialed 311 and put in at least four to five notices, and they said they came out and they actually closed the ticket out and said it was completed," said Carter. "And as you can see, it is not completed."

We put in our own complaints including photos. Twenty-two in all from across the city.

Over four months: six were fixed, two were partially completed, one was fixed by residents and four still remain open.

But, our investigation found nine complaints were wrongly closed and unresolved; including an illegal dump at Girard and Leidy avenues.

"We've been complaining about this for over a year and a half now," said resident Larry Dixon.

Other complaints we submitted, like a pile of old tires, not only remained but additional tires and an old television were added.

A pile of rubble and debris on the 2400 block of N. 28th Street was considered closed by Philadelphia 311, but still remained.

"I went to Philly 311 and reported to Philly 311 website that the fire hydrant was knocked out by a car accident," said Joe D'Amore of Roxborough.

Action News met up with D'Amore this winter. His father lives at Henry and Summit avenues.

He'd been trying to get a leaking fire hydrant outside the home repaired since November 2019.

"It's leaking water," he said. "And it's leaking two or three gallons an hour I'm estimating, which is probably 25,000 gallons since the time of the accident."

After we interviewed D'Amore, the hydrant was finally fixed, but it took 15 months.

Carter said it is not only the illegal trash she complained to the city about. She also put in a 311 request to remove two abandoned vehicles.

"Been around here for months," she said.

The complaint remains open, but last month someone removed them, but it's unclear who.

But what really angered her: she could never get a firm answer as to why this dump never got cleaned up.

"When I first called, 311 said they couldn't even find the street," she added.

But put in 943 North 48th Street or Moss Street on a GPS and the directions pop right up.

Even more frustrating for Carter, the city cited her elderly mother-in-law, not once but twice for the illegal dump.

"Oh my gosh, she is so upset and she is so worried about it," said Carter. "She was actually thinking of paying for it."

The city declined our request for a sit-down interview.

Most of our 311 complaints are the responsibility of the Streets Department, which gets tens of thousands of complaints each year, more than any other department.

Streets also declined to sit down for an interview for this story.

Instead, the department spokesperson released a statement that reads in part, "While the Streets Department is consistently rated as one of the best service providers through 311 Resident Satisfaction Surveys, there may be instances where service requests may be closed in error. The Department recognizes improvement is needed in properly closing service requests and will continue to work to do a better job."

"Why they say that they close out the ticket, as if a person is not going to come and see if it's really completed," said Carter. "I don't understand that."

Since we brought our findings to the city, the open complaints have been resolved including the illegal dumping on Moss Street.