2020 NHL Playoffs Today: Boston Bruins on the brink of elimination 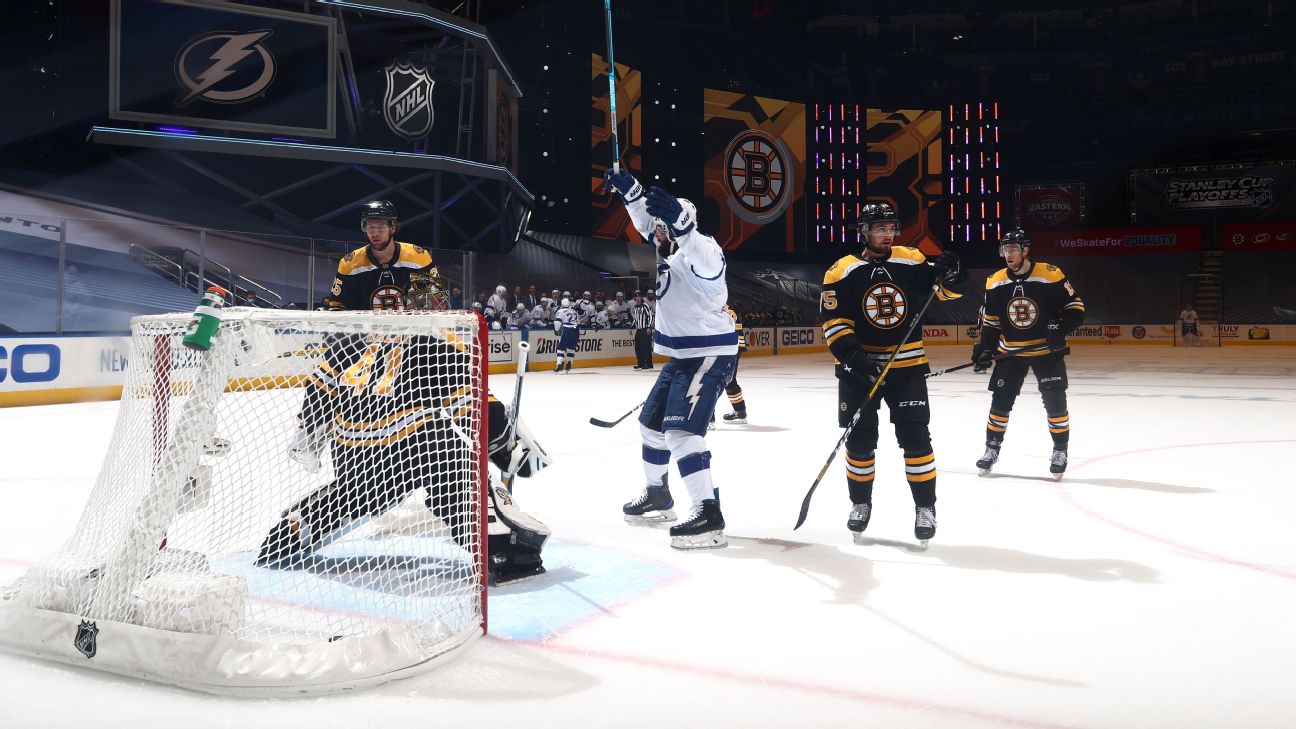 After two days with no games, as the NHL paused to put a focus on racial violence and issues of equality, the Stanley Cup Playoffs restarted Saturday with the Boston Bruins being pushed to the brink of elimination, and two key games that were the first half of back-to-backs that continue Sunday.

Injuries continue to impact this series. Goalie Ben Bishop remains unfit to play for the Stars. Goalie Philipp Grubauer, defenseman Erik Johnsonand forwards Matt Calvert and Joonas Donskoi are all unfit to play for the Avalanche as they look to rally in this series. "We were hurt all season. We don't want to be hurt, but we have no choice but to put our best foot forward and go out there and battle," said center Nathan MacKinnon.

As the Flyers' high-end players continue to struggle, the Islanders continue to get contributions from their entire lineup. "That's the way we're built, we're not blessed with those top-end guys in terms of heavy, high-offensive guys, but we have a lot of very valuable key pieces that can contribute in different ways," coach Barry Trotz said. "You get contributions through the whole lineup. That's how we're built. I think guys feel it. They are a part of it. When you get contributions through the whole lineup, it goes into the Islander concept."

Canucks rookie defenseman Quinn Hughes has one assist and a minus-5 in three games against the Golden Knights. Canucks coachTravis Green mulled over a question about his performance after Game 3, before saying, "He's a young guy, finding his way through another round of the playoffs. I think he's fine. I'm not worried about him at all. That team can chew up ice and take away time and space. They have a lot of speed on their team. He's adapting to it, still doing a lot of good things on the power play. I'm not worried about him one bit. He'll be fine."

Question of the day: Should the Flyers be worried about Claude Giroux?

Giroux has one goal in his last 23 playoff games and just three goals in his last 30 playoff games. He has one assist in this series against the Islanders. He's not the only one struggling -- Travis Konecny did not score for the 12th straight game this postseason, too -- but the lack of production from the Flyers' stars is getting noticed. "We need to be a lot better than we were tonight, especially our top-end guys," said coach Alain Vigneault.

Avalanche vs. Stars over 5.5 goals (minus-125). The Avalanche had been over this number in six straight games. Dallas has been over in five of six games. Let's see if they've got one more wild one in them as Colorado plays another critical game.

The Bruins have now lost three in a row in the postseason, getting outscored 14-5 in that span. Ondrej Palat had two goals and Victor Hedman had the other. Andrei Vasilevskiy did the rest, making 29 saves. Bruins coach Bruce Cassidy saw improvement from the previous game, just not execution. "I don't think we had our legs in Game 3. This one, I thought we did. We had our energy level. We were competing hard, winning our share of races, winning pucks. To score goals, we have to hit the net more often," he said. Full recap.

Semyon Varlamov responded to being pulled 15:09 into the first period of Game 2 with a strong 26-save performance to lift the Islanders in Game 3. Once again, the goals came from everywhere on the roster: Matt Martin and Anders Lee scored, and Leo Komarov had the game-winning goal in the second period. Said coach Barry Trotz: "I think that mindset has paid dividends for us, even if we get scored on early or don't have a great stretch of a period or two periods, that you just get back on track and identify what we need to do to have success." Full recap.

Robin Lehner made 31 saves for the shutout win, as the Golden Knights weathered a hot start from Vancouver to take a 2-1 series lead. Alex Tuch, Zach Whitecloud and Mark Stone scored for the Golden Knights, who are now 7-0 when they strike first in the postseason. "Give their goalie credit. Their goalie made some nice saves. But that's playoff hockey: Sometimes you have a good period and you don't win it," said Canucks coach Travis Green. Full recap.

Lehner was terrific when the Knights needed him to be with 16 saves in the first period vs. Vancouver. It's his second shutout of the series.

Palat went the first nine games of the playoffs without a goal. He now has four goals in three games, with two tallies in their Game 4 win over Boston.

The Islanders goalie made a statement with a 26-save effort after being pulled in Game 2. "I know I didn't play well. I gave up three quick goals, but it happens, you know? Nothing goes perfect, especially like in the playoffs, there's a lot of games. You lose today, you win tomorrow," said Varlamov, who is 8-2 with a .932 save percentage and a 1.76 goals-against average. "I learned from mistakes, move on."

That's the full quote from Flyers coach Alain Vigneault, who took heat for his comments two days ago about postponements in other sports, saying on Thursday: "I really have no idea what's going on in the outside world. We're in this bubble right now. I'm invested 24/7 on our team, working 20 hours a day going through video and preparing our group."

Thanks to Gritty, the Flyers attended a Phillies game in spirit.

Controversy of the day

This hit from Nick Ritchie of the Bruins on the Lightning's Yanni Gourde resulted in a five-minute major. Victor Hedman scored on that power play to extend the lead to 3-0. Gourde would return in the third period. "Clearly, Gourde was down on the play, and he's a good player -- real good player for them -- clever, obviously. He got them on the power play for five minutes, he finished the game, had no problems in the third period," said B's coach Bruce Cassidy. 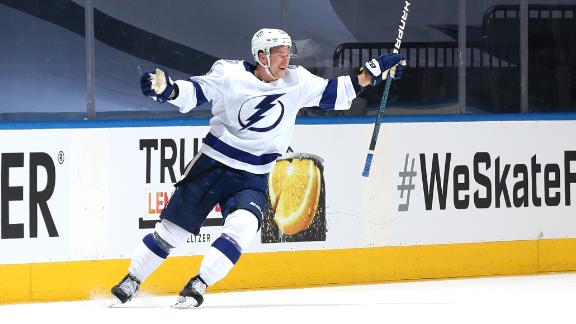 Palat nets a pair in Lightning win
Ondrej Palat scores the first two goals for the Lightning, and they never look back in their Game 4 victory against the Bruins. 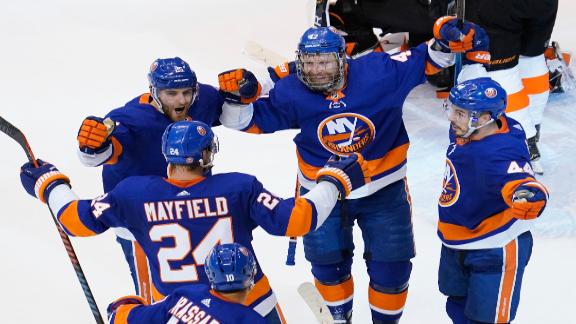 Komarov nets goal as Islanders take Game 3
Leo Komarov gives the Islanders the lead with a goal in the second period as they win Game 3 3-1 vs. the Flyers. 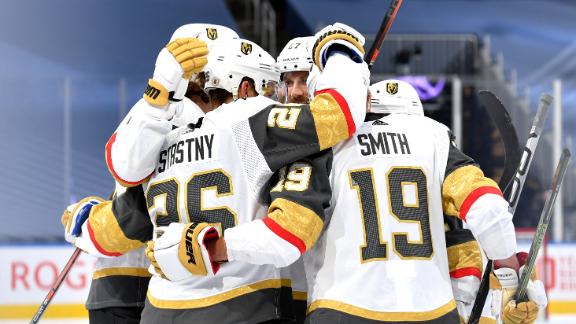 Golden Knights shut out Canucks to take series lead
Alex Tuch, Zach Whitecloud and Mark Stone account for the Golden Knights' goals as they shut out the Canucks 3-0 in Game 3. 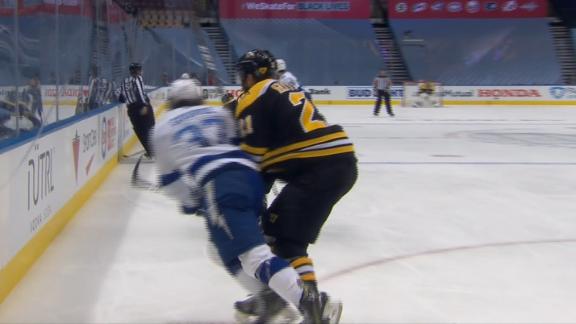