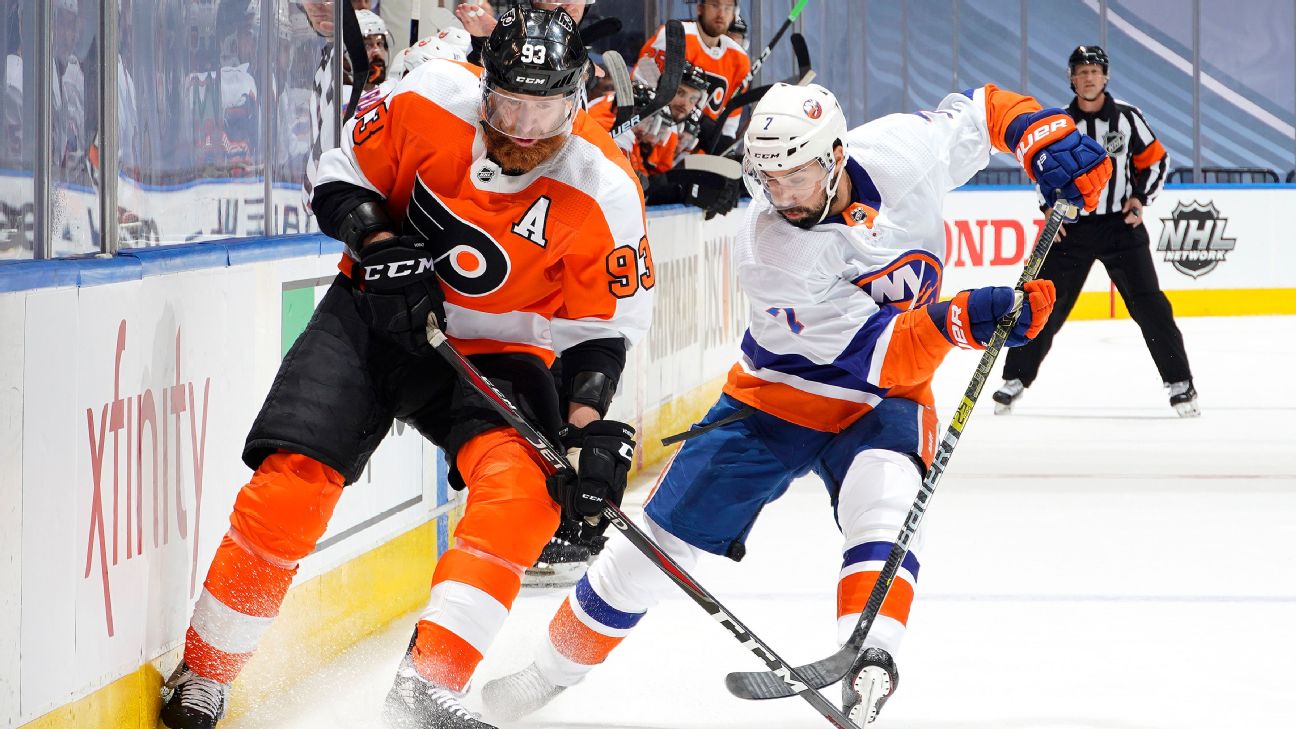 The Dallas Stars dispatched an injury-riddled Colorado Avalanche and the Vegas Golden Knights finally solved Thatcher Demko and the Vancouver Canucks in their respective Game 7 wins.

That gives us three of the NHL's final four of the 2020 Stanley Cup playoffs. Will it be the Philadelphia Flyers or the New York Islanders rounding out the bunch?

The Flyers try to complete their comeback from a 3-1 deficit in Game 7. All three of their wins over the Islanders were in overtime, including their double-OT win in Game 6. There's injury intrigue for Philadelphia, as Sean Couturier's status is in question. There's lineup intrigue for the Islanders, as coach Barry Trotz must decide between goalies Semyon Varlamov and Thomas Greiss, as the former has struggled in three of his past four appearances. "Both of them are really good options for me at goal," Trotz said. "We're blessed with two pretty good goaltenders. Any decision that we decide on, we have both trust with our players and with our goaltenders in that situation."

Islanders over 2.5 goals vs. Flyers (-120). Game 7 should be a tightly played affair, which is why this total is as low as it is for a favored team. But the Islanders have scored three or more goals in seven straight games. We'll assume they're good for one more such affair.


"We had a secret Finnish weapon over here," said Stars captain Jamie Benn, motioning over to Joel Kiviranta. The 23-year-old tallied a hat trick in his third career playoff game, including the game winner at 7 minutes, 24 seconds of overtime to send Dallas to its first conference final in 12 years. Kiviranta wouldn't have appeared in Game 7 had it not been for forward Andrew Cogliano being deemed "unfit to play" by the Stars before the game. Alexander Radulov scored two goals for Dallas and Anton Khudobin made 40 saves. Vladislav Namestnikov scored twice, and Nazem Kadri and Andre Burakovsky each had a goal and an assist for Colorado, which lost in Game 7 for the second straight postseason, though the future remains very bright for the Avs. Full recap.

Thatcher Demko nearly did it. The Canucks' backup goalie took over from "unfit to play" starter Jacob Markstrom in Game 5 with Vancouver down 3-1. Demko faced 125 shots in the last three games of the series, and stopped 123 of them, including 33 saves in Game 7. Vegas defenseman Shea Theodore was the only Golden Knight to beat him, once in Game 5 and then with a power-play goal at 13:52 of the third period of Game 7 that ended up being the series winner. (Vegas would add two empty-net goals.) "There were times it felt like we could have played six hours and not scored on them," Vegas coach Peter DeBoer said. "What he did, and the lightning they could put in a bottle in the last three games with him and how he played ... what I'm proudest of is how our group stuck with it." And now, the Canucks must decide how to best build upon this earlier-than-expected success. Full recap.

Question of the day: What if Colorado had been healthier?

In the regular season, the Avalanche had only 10 players appear in at least 65 games. They overcame those injuries to finish second in the West with 92 points. But the injury bug munched on them again in the postseason. In Game 7, the Avalanche were missing forwards Gabriel Landeskog, Joonas Donskoi and Matt Calvert; defensemen Erik Johnson and Conor Timmins; and their top two goalies, Philipp Grubauer and Pavel Francouz. The Avs had rallied from a 3-1 deficit to push the series to Game 7. But in the end, they didn't have enough to advance. "Two straight years. Game 7 losses. It's tough. There are no moral victories here. We came here to win. We didn't get the job done," said star Nathan MacKinnon. "I would have liked to see our team fully healthy, that's for sure."

Kiviranta's first goal of the game, at 3:06 of the second period, tied the score at 2-2. His second goal, at 16:30 of the third period, tied the score at 4-4 to eventually force overtime. Then he ended the game and the series in the extra session. "I don't know. It was just a great pass behind the net and maybe they just lost me a little bit in front. Unforgettable moment," Kiviranta said. "I didn't know what to expect for this day. Obviously the first Game 7 in my life. It felt like a normal game for me. It was pretty fun."


Demko was extraordinary again for the Canucks in Game 7, and nearly stole the series. "That's as hard an adversity as we can face. That goalie was just unbelievable. It was hard to get one past him," Vegas forward Jonathan Marchessaultsaid.

He wasn't nearly as busy as Demko, but Lehner was also brilliant in making 18 saves for the Game 7 shutout. That included this incredible glove save. "I know you say I can't save back-door shots, but big man moves when he wants to," Lehner quipped afterward.

"I need a drink after the last three games before I think about Dallas. We'll talk tomorrow." -- Vegas coach Pete DeBoer on winning Game 7, advancing to play the Stars.

Reaction of the day

The look on Mark Stone's face said it all about Thatcher Demko's performance against the Knights. 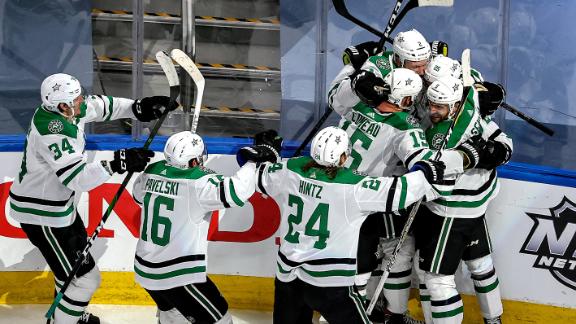 Stars beat Avs in Game 7 on Kiviranta's OT winner
Joel Kiviranta caps off his hat trick by scoring an overtime goal to send the Stars to the Western Conference finals with a 5-4 win over the Avalanche in Game 7. 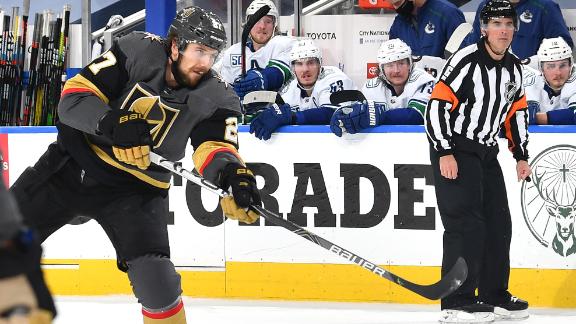