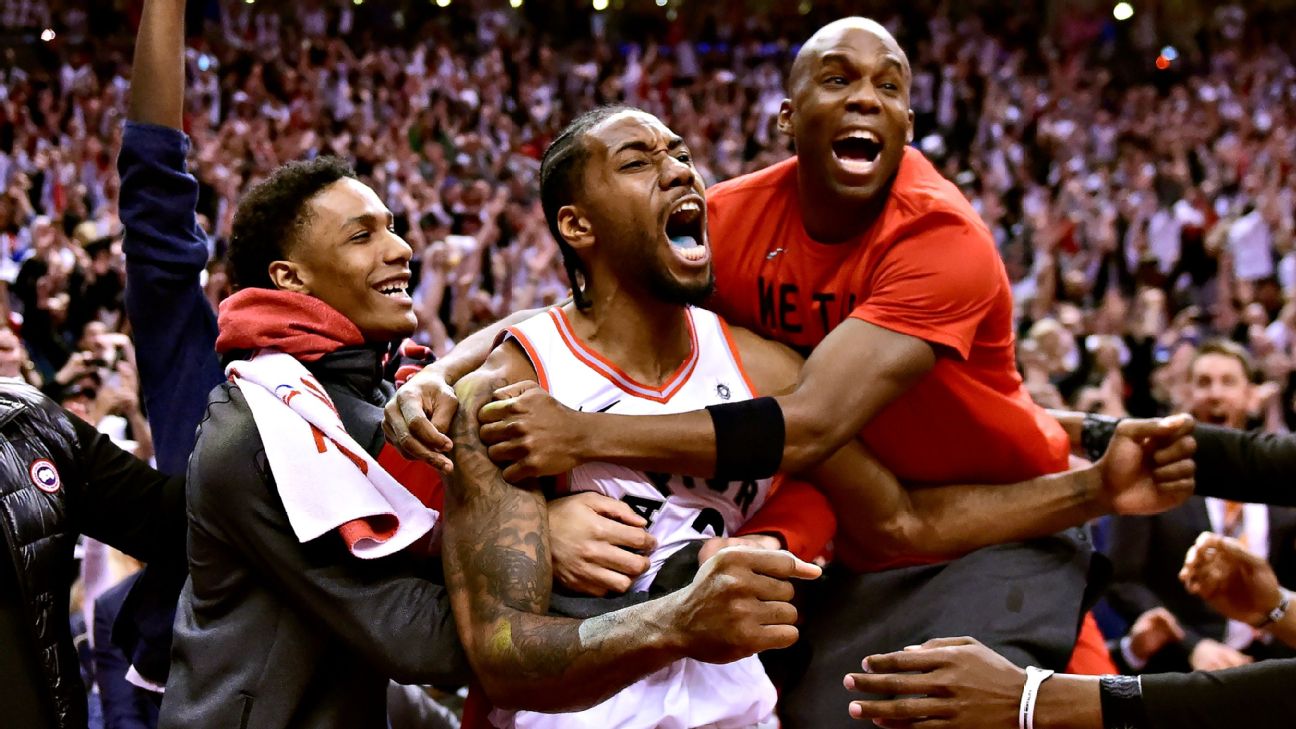 The last time the Toronto Raptors played a Game 7, it was a 27-point blowout over the Miami Heat in 2016 that sent the Raptors to their first conference finals berth in franchise history.

After a disheartening loss in Game 6 against the Philadelphia 76ers, the two teams engaged in a seesaw battle that included 10 lead changes and six ties leading up to the final seconds of the series.

To recount the biggest shot in the second round of the 2019 playoffs -- and Toronto Raptors history -- we turn to those present for the occasion:

Leonard:I was disappointed missing that free throw. I was very mad.

Tobias Harris collected the rebound and pushed the ball to Jimmy Butler, who streaked up the court and got a fast-break layup to fall with 4.2 seconds remaining over the outstretched arm of Serge Ibaka.

Leonard:I tried to race down and get the rebound. Probably should have sprinted back to give some help on that layup that Jimmy made. But after that, I was just like, whatever play he drew up, I'm gonna have to get to my spot and shoot it with confidence.

Raptors head coach Nick Nurse called a timeout and a final play was drawn up.

Nurse: We run Kyle [Lowry] off there first as the first option. Then, Kawhi loops under there and gets it at the top and it's his call from there what to do. We've seen that one a few times this year.

Leonard: We ran a similar play during the Magic series and I ended up just catch-and-shooting the ball. It was probably about three seconds so, I just remembered that moment, knowing I had time at least to pump fake and take a dribble.

So, he drew up that play again tonight and there was four seconds left and, remembering that moment, I knew I had some time to get some space rather than just catch and shoot the ball.

Leonard took the inbounds pass from Marc Gasol near the top of the key. Ben Simmons pushed him out near half court and Leonard started a drive toward the right corner. Joel Embiid left Pascal Siakam to pick up Leonard across the hash mark.

Leonard took one more dribble toward the baseline and rose for a 21-footer over Embiid in the corner.

Raptors general manager Bobby Webster: I always walk down to the first row so I know I can get out before. I'm standing next to Nick's wife, and [Kawhi] is coming toward us. You're worried about -- is he going to get the shot off in time? He comes deeper, deeper, deeper. Embiid's on him. Then he's just got to get it up high enough to get over Embiid.

Leonard: I ended up catching it and just trying to get to a space so I could get the shot off. Embiid was guarding me. But he's taller and longer than me, so I ended up finding a spot that I like ... that I work on. I knew I had to shoot it high. A couple of possessions before that I had the same kind of shot from 3 and it ended up coming short. I had to put it up even higher than that.

Scotiabank Arena security guard Bader Beituni: I was standing with one of my friends here and I called it. I told him, "Kawhi's gonna take this. It's gonna be a game winner right here."

Leonard: I just went into my shot, and just shot it as high as I could and I got some loft on it. It felt great.

Butler: He hit a tough one. You tip your hat to that. He's an incredible player. We know it. Y'all know it. And there's not much more you can say about that.

It did seem like it was up there for a while, but with the way he missed and the bounce on the ball and the fact that it did go straight up and not go to the right or the left. It's a tough way to lose. That's a hell of a shot and what a tremendous series.

Simmons:Jo obviously got out there and was able to put a hand up, but he's a great player who made a great shot.

Scotiabank Arena security guard Nicholas Prasad: I saw the ball hit the basket, hit the rim the first time. The first thing I thought about was, "We're going to overtime." Second time it hit the rim, I thought we had a chance. And the third time it went in. And I'm like, "Damn, with this referee system they're definitely going to review it."

And when that ball went in I ran up three stairs -- I almost tripped twice -- and all I saw was Masai [Ujiri] crying. I saw everybody in the stands crying. We were just in shock. But it was like a really good shock. And that was just joy.

I think he missed a couple of those along the way this season. That exact same play. Similar shot. So, it's good the balancing scales were there tonight.

Embiid: Game 7 -- losing the game that way. Last shot. After a hard-fought game. I feel like we had a chance. A lot of things go through your mind. It sucks. I can't explain it. It just sucks. 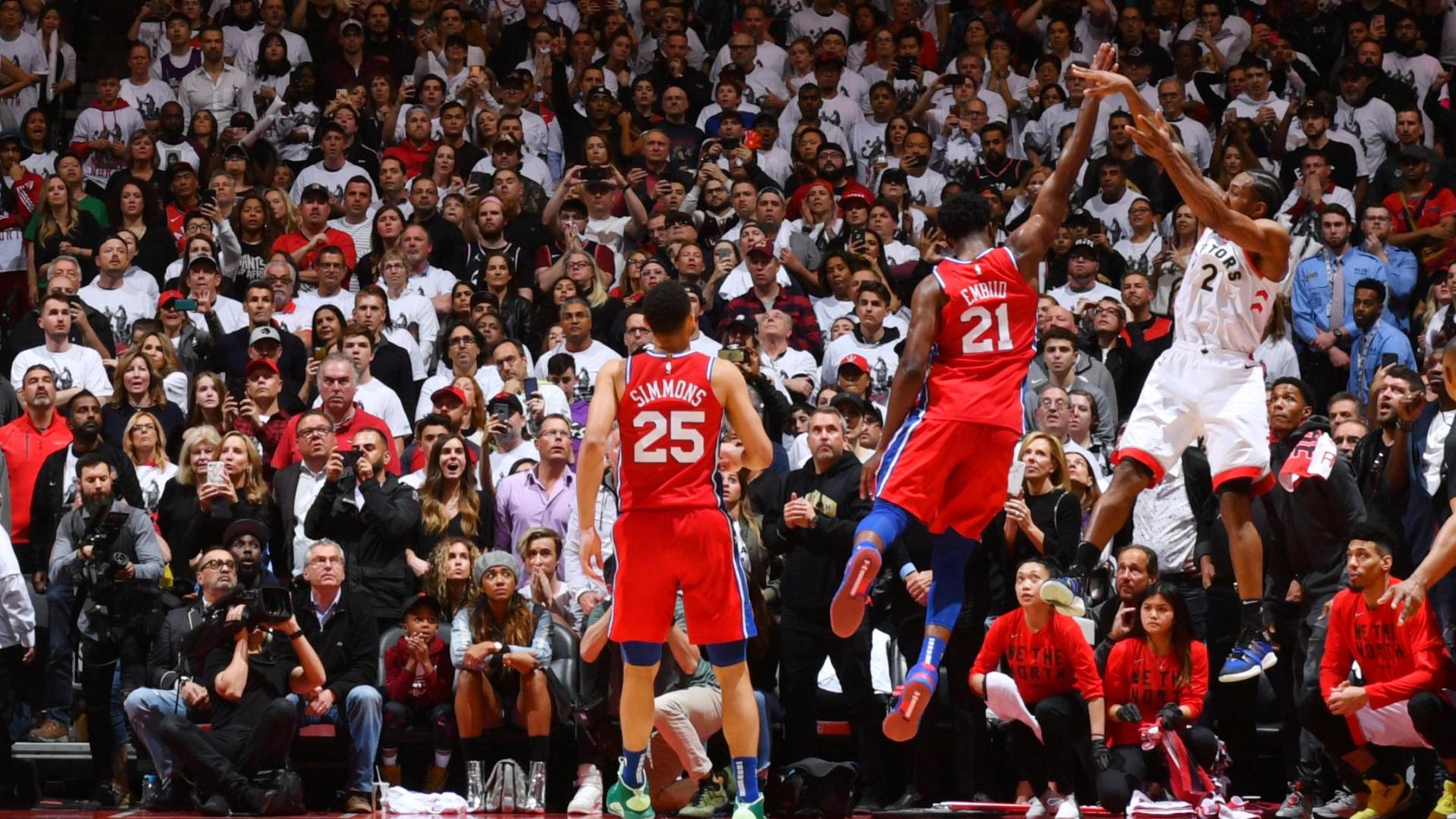 Kawhi's buzzer-beater wins Game 7
Kawhi Leonard wins Game 7 for the Raptors with a buzzer-beating jumper that bounces off the rim multiple times. 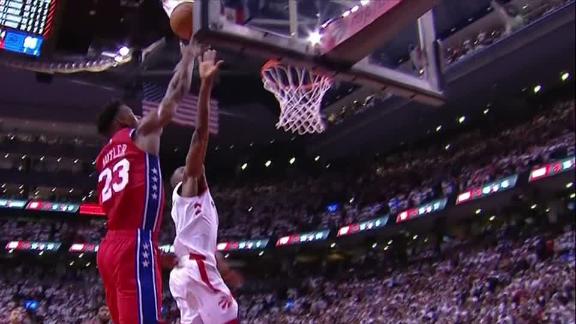 Kawhi's missed free throw lead to Butler's layup
With 10 seconds left, Kawhi Leonard misses a free throw, which leads to Jimmy Butler racing up the court for the game-tying layup. 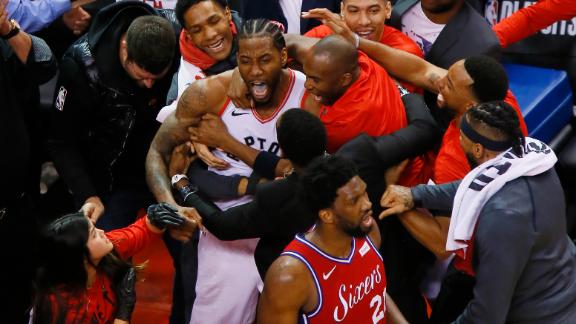