Agent: Nick Young back to Lakers 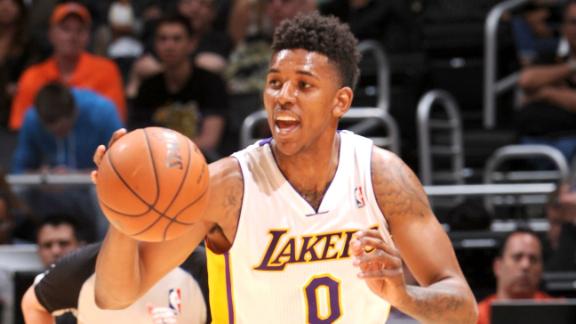 ESPN
Nick Young is set to return to the Los Angeles Lakers, his agent confirmed to ESPN.com's Jeff Goodman.

Young's deal is for four years, with the fourth year being a player option, agent Mark Bartelstein confirmed. According to a source, the deal is worth $21.5 million.

Thank you LakerNation for all your support, I'm very happy to say: I'm home! #SwaggyIsBack #GreatThingsToCome for the Lakers.

- Nick Young (@NickSwagyPYoung) July 11, 2014Young opted out of his contract with the Lakers in June. The 6-foot-6 guard is coming off a career year last season, when he averaged a team-high 17.9 points for a Lakers team that finished 27-55.

"I always wanted to be a Laker, and it will be a dream come true to still be here, but it's crazy," the seven-year veteran said in April. "You never know what happens. Last year they had a whole different team. It's obvious they're going to make some changes."

A Los Angeles native, Young played at USC. After opting out in June, a league source said Young wanted to be made "a priority" by the Lakers over the summer in order to stay.

Information from ESPNLosAngeles.com's Dave McMenamin contributed to this report.