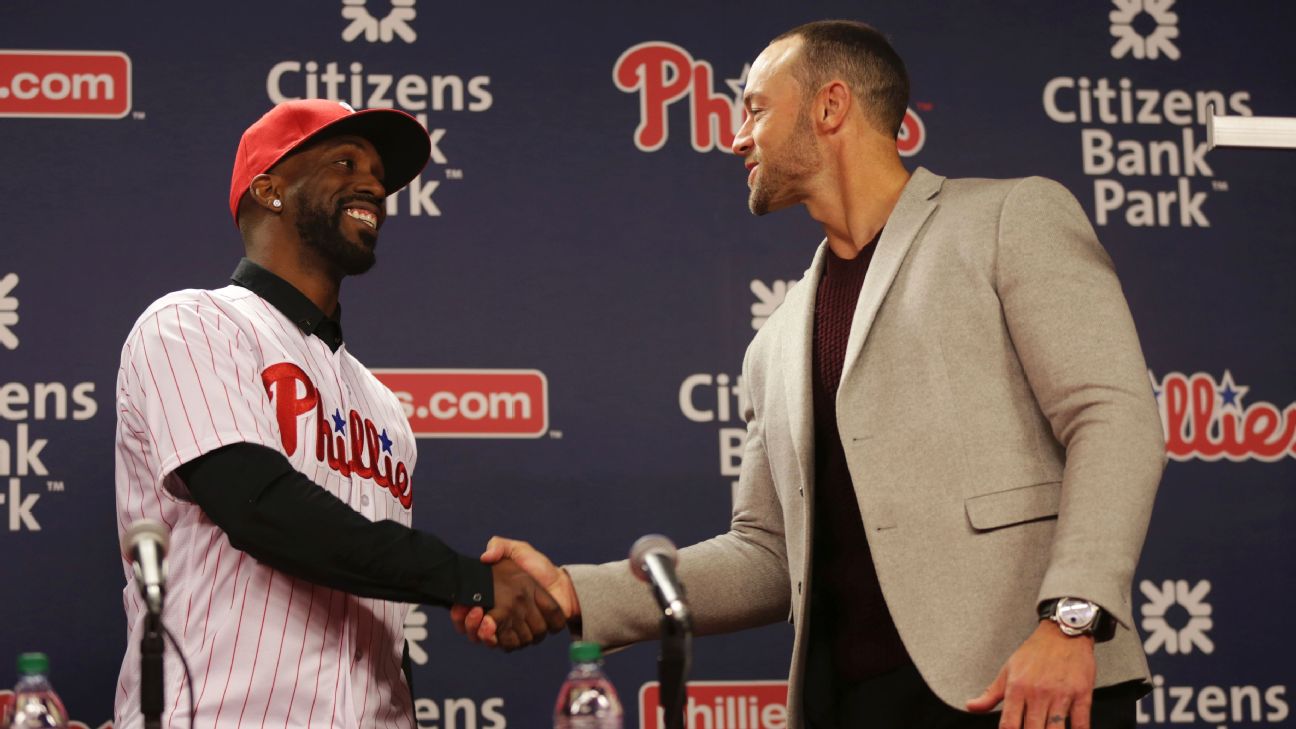 PHILADELPHIA -- Andrew McCutchen returned to his home state to join his third team in less than 12 months, intent on regaining his old hitting stroke.

The Philadelphia Phillies introduced their newest outfielder at a news conference Tuesday, a week after giving him a $50 million, three-year contract that includes a team option for 2022 and could be worth $62 million over four seasons.

"This is a game of adjustments," McCutchen said. "I've definitely had to make some adjustments over the years, and I know that I can be even better than what I've been over the past few (seasons). There has been a decline, yes, but I do understand what I'm capable of doing."

McCutchen hit .255 with 20 homers and 65 RBIs in 155 games this year for San Francisco and the New York Yankees. His average was a career low and his homers and RBIs were his fewest since 2010. He spent his first nine years in Pittsburgh and was the 2013 NL Most Valuable Player.

"I know I can be better, and that's what I've been doing all offseason: preparing and working, and that's not going to stop," he said. "I'm looking forward to being even better than I've been. I'm never satisfied, and I don't settle with what I've done. That's just the person I am."

Phillies manager Gabe Kapler gave up his No. 22 and presented McCutchen with his first red pinstriped jersey. He said McCutchen will bat anywhere from first through fifth and will play a corner outfield spot.

"He's a guy who consistently puts up 600 plate appearances," said Kapler, who will wear No. 19. "He's been extremely durable, and he wants to play for us every day."

Hoskins came out to see McCutchen and talked about the team's offseason moves. The Phillies acquired shortstop Jean Segura from Seattle and are pursuing free agents Manny Machado and Bryce Harper.

"I think we've (added) some pretty good baseball players so far, really exciting," Hoskins said. "A couple of more veteran guys in Segura and Cutch, which I really think will add to the clubhouse presence and just kind of overall environment, especially when we get late in the year. These guys have been through that. And it will be nice for the bulk of us to be able to lean on them and kind of get us through that."

Hoskins and Harper share an agent, Scott Boras, so Hoskins has talked to the 2015 NL MVP.

McCutchen hasn't been part of any recruiting process but is willing to do whatever it takes to help the Phillies improve. Philadelphia finished 80-82 last season after leading the NL East on Aug. 11.

"I saw this team from afar and played against them, and I saw what they were able to do this season," McCutchen said. "They fell a little short, but something I realize is that it's there. I'm happy to be a part of it and help push this team forward to winning a championship."
Report a correction or typo
Related topics:
sportsespnmanny machadomlbgabe kaplerrhys hoskinsjean seguraandrew mccutchenphiladelphia philliesbryce harper
Copyright © 2021 ESPN Internet Ventures. All rights reserved.
TOP STORIES
Police: Man dies after apparent road rage shooting in Philly
'It was like an explosion': NJ family says falling ice hit home
Family gathers to remember teen gunned down at bus stop
Senate passes stopgap funding bill, avoiding government shutdown
Philly's iconic Belmont Maple tree scheduled to come down
Vigil held for slain Temple University student
$12,000 worth of equipment stolen from Montco football team
Show More
Music legend and philanthropist Kal Rudman dead at 91
No arrests made after standoff with homicide suspect in Philly
Surgeon General reacts to Biden's winter COVID strategy
Afghan evacuees adjusting to new lives in New Jersey
Man in custody following Upper Darby shooting spree
More TOP STORIES News