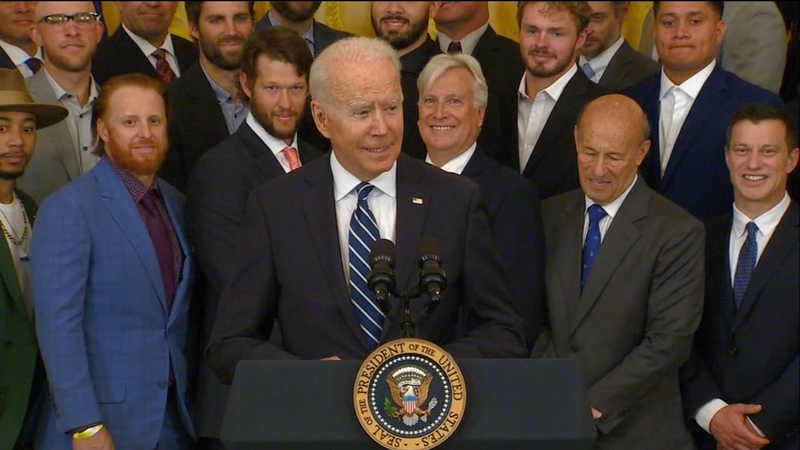 President Biden to Dodgers: 'My wife is a Philly girl'

WASHINGTON (WPVI) -- President Joe Biden couldn't help to bring up his and the first lady's favorite baseball team when hosting the Los Angeles Dodgers at the White House on Friday.

"I'm not going to mention that team in Philadelphia. My wife is a Philly girl from her belt buckle to her shoe soles," Biden said.

Dr. Jill Biden was born in Hammonton, New Jersey, and grew up in Willow Grove, Pennsylvania.

"If I root for anyone but the Phillies, I'll be sleeping in the Lincoln Bedroom alone," Biden joked.

The Dodgers were marking their World Series victory last October over the Tampa Bay Rays.

The team, which is in D.C. for a four-game series against the Washington Nationals, attended the ceremony in the East Room.

"We're honored and thrilled they're here and that goes for the Vice President, too," Biden said. "She's from California, you probably heard, I'm not going to mention which end of the state she's from and who she roots for."

The ceremony marks the latest step in the White House's efforts to return to large in-person events as it seeks to highlight the nation's emergence from the COVID-19 pandemic.

It also marks the return of ceremonies for sports champions at the White House after an inconsistent record of the tradition under the Trump administration.