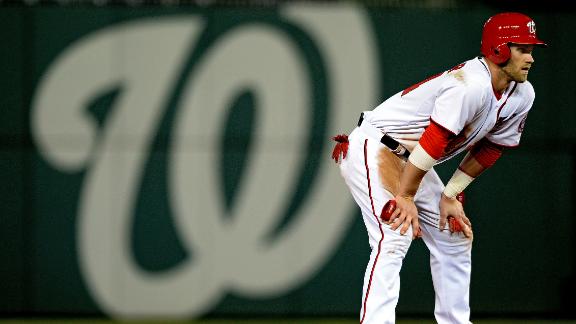 WASHINGTON -- Star outfielder Bryce Harper was placed on the 15-day disabled list by the Nationals on Sunday with a sprained left thumb. The move is retroactive to Saturday.

Harper hurt his hand with a head-first slide into third base Friday night after hitting a third-inning, bases-loaded triple in Washington's 11-1 victory. He stayed in the game for an inning before he was replaced.

"It's part of baseball. You slide into the bag and sometimes you get your fingers," Harper said. "It's a bummer, but hopefully I'll be back soon."

Harper will fly to Cleveland on Monday to see prominent hand specialist Thomas Graham for a second opinion. For now, his proscribed treatment is ice.

Harper joins starting catcher Wilson Ramos and starting third baseman Ryan Zimmerman on the disabled list, both with hand injuries. Ramos, hurt on Opening Day, had surgery on his left hand. Zimmerman broke his right thumb, also sliding into a bag, on April 12.

Also on the DL are starting pitcher Doug Fister (back), who is scheduled for a rehab start on Sunday, and reserve outfielder Scott Hairston (side).

Harper went 2 for 2 and had a career-high four RBIs on Friday night, giving him nine for the season as he lifted his batting average to .289. He has only one home run in 83 at-bats.

"It's frustrating," Harper said. "I want to be out there and be able to help my team win every single day."

Steven Souza Jr. was recalled from Triple-A Syracuse to replace him on the roster but was not in the lineup Sunday.