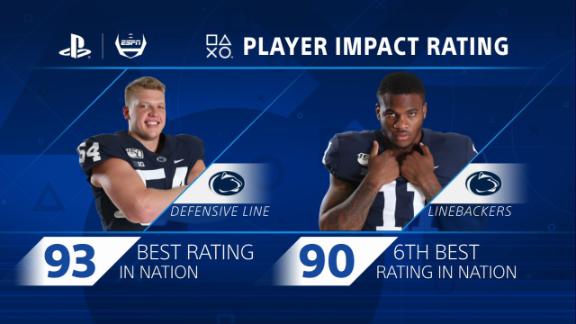 The most recent time Michigan traveled to Happy Valley to play Penn State, the Wolverines were on the wrong end of a 42-13 defeat that left them with their second loss of the 2017 season.

The Nittany Lions' offense got off to a fast start, and while Saquon Barkley and Trace McSorley stole the headlines, the Penn State defense teed off on Michigan, holding the Wolverines to 166 yards passing and 103 rushing.

Now, No. 16 Michigan (5-1, 3-1 Big Ten) is preparing to travel once again to Happy Valley, hoping to avoid its second loss of the season. No. 7 Penn State (6-0, 3-0) welcomes the Wolverines in a whiteout game Saturday (7:30 p.m. ET on ABC). If Michigan wants to avoid history repeating itself, the offense is going to have to succeed against a Penn State defense that has given up only 49 points all season.

Michigan coach Jim Harbaugh said he believes his offense -- led by quarterback Shea Patterson, who scores a 48 in PlayStation Player Impact Ratings -- is hitting its stride. That belief is going to need to be reality if the Wolverines are to have a shot at winning this game.

Not only has Penn State's defense not given up many points, the unit is giving up only 259.7 yards per game, fourth-best in the FBS, and only 3.83 yards per play. What has been most impressive thus far has been the rush defense, which really seems to be hitting its stride.

Through six games, Penn State ranks third in rush yards allowed per game with 53.8, has given up only one rushing touchdown and ranks second in opponent rushes for zero or negative yards.

That does not bode well for a Michigan offense still looking for its identity, particularly on the ground. The Wolverines rank 78th in rush yards per game, with 156.2, and 85th in yards per rush.

If there is a silver lining to that stat, and any evidence to back Harbaugh's comments about the unit hitting its stride, it's that Michigan had success running last weekend against Illinois. True freshman Zach Charbonnet (1 rating) had 116 yards on 18 carries, and Hassan Haskins (8 rating), who Harbaugh said is "ascending" at the running back position, had 125 yards on 12 carries, with one touchdown each.

Michigan is going to need that run game to produce and relieve some pressure on Patterson. Expect there to be pressure, particularly from Penn State's front seven, led by defensive ends Yetur Gross-Matos (63 rating) and Shaka Toney (83), who each has 5.5 sacks, and linebacker Micah Parsons (94), who leads the team with 31 tackles and six tackles for loss.

Patterson will need all the help he can get against the Nittany Lions' pass rush. In that 2017 game, the Nittany Lions racked up seven sacks against Wolverines quarterback John O'Korn. This season, Penn State is ranked second in sacks with 27, and Michigan's offensive line has had its issues with pressure.

Michigan's quarterbacks have been sacked, under duress or hit on 28.4% of their dropbacks this season -- and are going to see much of the same Saturday.

No matter which way you look at it, the Michigan offense is going to have its hands full with Penn State's defense.