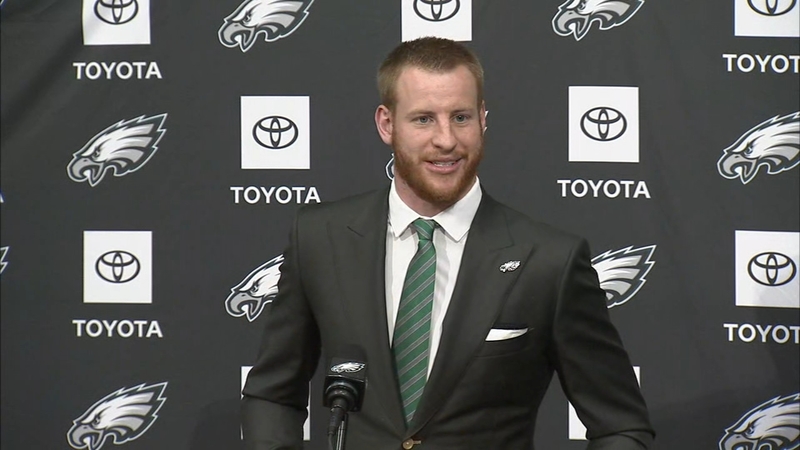 PHILADELPHIA (WPVI) -- Carson Wentz is all smiles, and for good reason. The Eagles quarterback met with the media for the first time Monday evening since signing his four-year, $128 million contract extension.

"I love this place. I want to be here for a while," he said.

Signing the contract now accomplishes two things. It avoids contract distractions during the season. It also keeps Wentz in an Eagles uniform through the 2024 season. The deal contains $107 million in guaranteed money. But, with the way NFL contracts are escalating, Wentz could be considered underpaid in a couple of years.

"We wanted to reach something that was both fair for me and my family, but also for this team and this organization for the future", Wentz said. "I don't think I'll have any regrets."

Eagles owner Jeffrey Lurie called Wentz the "face of the franchise in so many ways." Lurie went on to say, "Our goals are to win really big and to do that at its best, you have to have a quarterback who wants it really badly and Carson, in every way, wants it really badly."

Wentz has seen his last two seasons end prematurely due to injuries. In 2017, he suffered a knee injury. Last season, the injury bug struck again in the form of a fracture in his back. Wentz has looked sharp during the off-season work. He says his team does too.