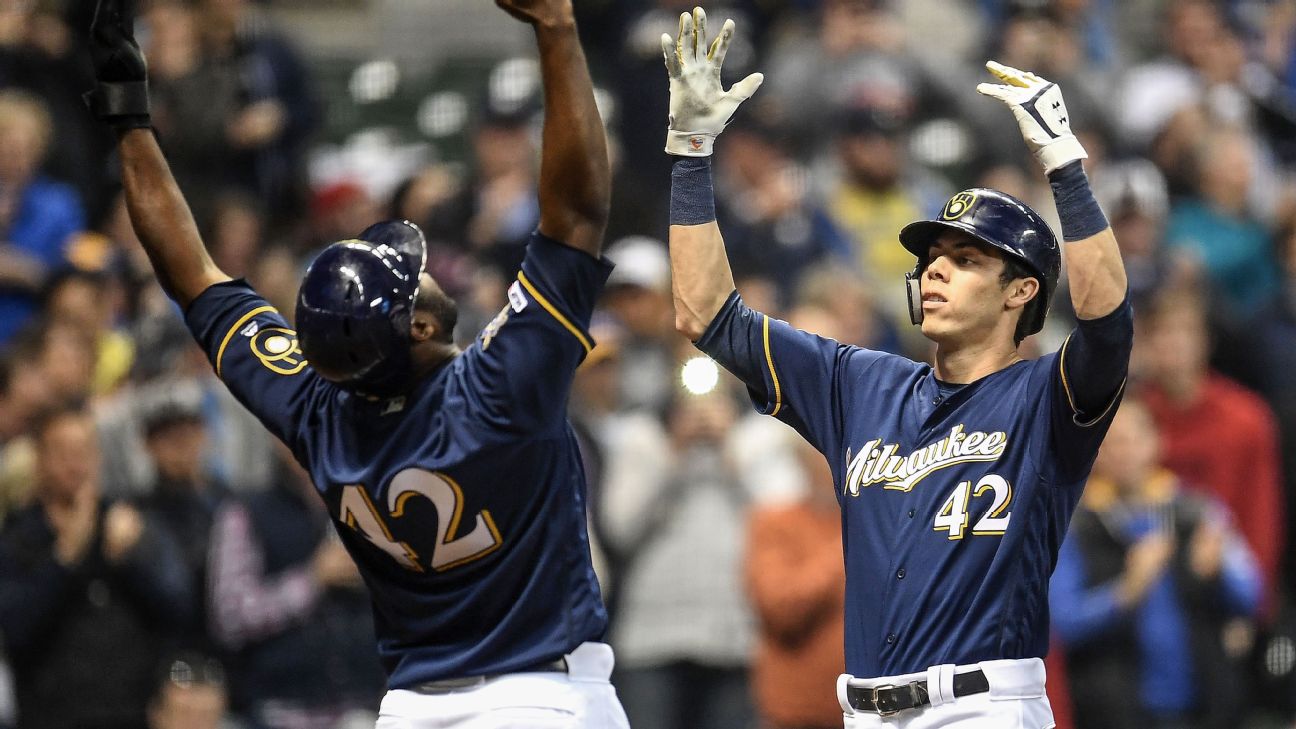 PHILADELPHIA -- The NL Central-leading Milwaukee Brewers are finally starting to get more healthy.

Milwaukee activated 2018 NL MVP Christian Yelich and fellow outfielder Lorenzo Cain from the injured list and put both in the starting lineup for Monday night's game at Philadelphia.


The Brewers made room for the two former All-Stars by sending slumping first baseman Keston Hiura and outfielder Tyrone Taylor to the alternate training site.

"We haven't been activating players lately, so just to activate some players is a change of how last week went, that's for sure," Brewers manager Craig Counsell said.

The Brewers had 17 players on the injured list Sunday when they lost 16-4 to the Los Angeles Dodgers. Yelich hasn't played since April 11 due to a lower back strain, Cain had a left quad strain and last played on April 13.

Even with all those injuries, the Brewers won three of four from the Dodgers. They're starting a seven-game road trip with a 17-11 mark that tied the San Francisco Giants for the best record in the National League.

"We've done a decent job winning some games without some important players, so these guys don't have to do everything," Counsell said. "Just contribute to wins."

Yelich is batting .333 with a .459 on-base percentage and no homers and one RBI in just nine games. Cain, who played only five games last year before opting out, is hitting .154 with two homers and four RBIs in seven games.


"We'll be safe with both these guys and ease them both into it," Counsell said. "I'd expect days off for both of them as we go here, especially on this road trip, just kind of seeing where they're at and getting their legs underneath them."

Counsell said Hiura and Taylor both eventually would end up with the Brewers' Triple-A affiliate in Nashville, Tennessee.

Hiura opened the season as the Brewers' starting first baseman but was batting just .152 with one homer and five RBIs in 26 games. He had struck out in 32 of his 89 plate appearances.

Hiura noted on Instagram last month that his mother was diagnosed in February with B-cell follicular lymphoma, a form of non-Hodgkin lymphoma.

"At this point, it's just best for Keston, I think, to kind of get in a different environment, maybe take a little time off here before he starts playing in games again and then just get started in a new environment," Counsell said.


"It's important for us that I think and still really believe Keston can be our primary first baseman and has the ability to be a force in the middle of our lineup. We weren't there and it felt like we were almost getting a little farther from that than closer to that at some point," he said.

Counsell said Daniel Vogelbach would get much of the work at first base for now and that outfielder Billy McKinney also could make some appearances there.

Hiura, 24, had played second base in 2019-20 but moved to first base this year when the Brewers signed Kolten Wong, a Gold Glove second baseman the past two seasons. Counsell said the decision to send Hiura down was dictated entirely by his struggles at the plate rather than anything he did at his new position.

"I really think this is going to benefit Keston," Counsell said. "I think it can be a short-term thing, and I think he can be back and be a productive offensive player fairly quickly."