WPVI
PHILADELPHIA (WPVI) -- At Sunday's Phillies game against the Braves, fans flocked to Citizens Bank Park, including one fan who isn't ready to let go of his Cole Hamels Phillies' jersey.

"I'll wear it as long as he's in baseball. I'll wear it because I support him," said, Stanley Lowe.

The three-time all star pitcher wants Philadelphians to know, he also supports them.

One day after making his pitching debut for the Texas Rangers, he and his wife Heidi took out a full page ad in Sunday's Philadelphia Inquirer thanking the city they've called home since 2006. 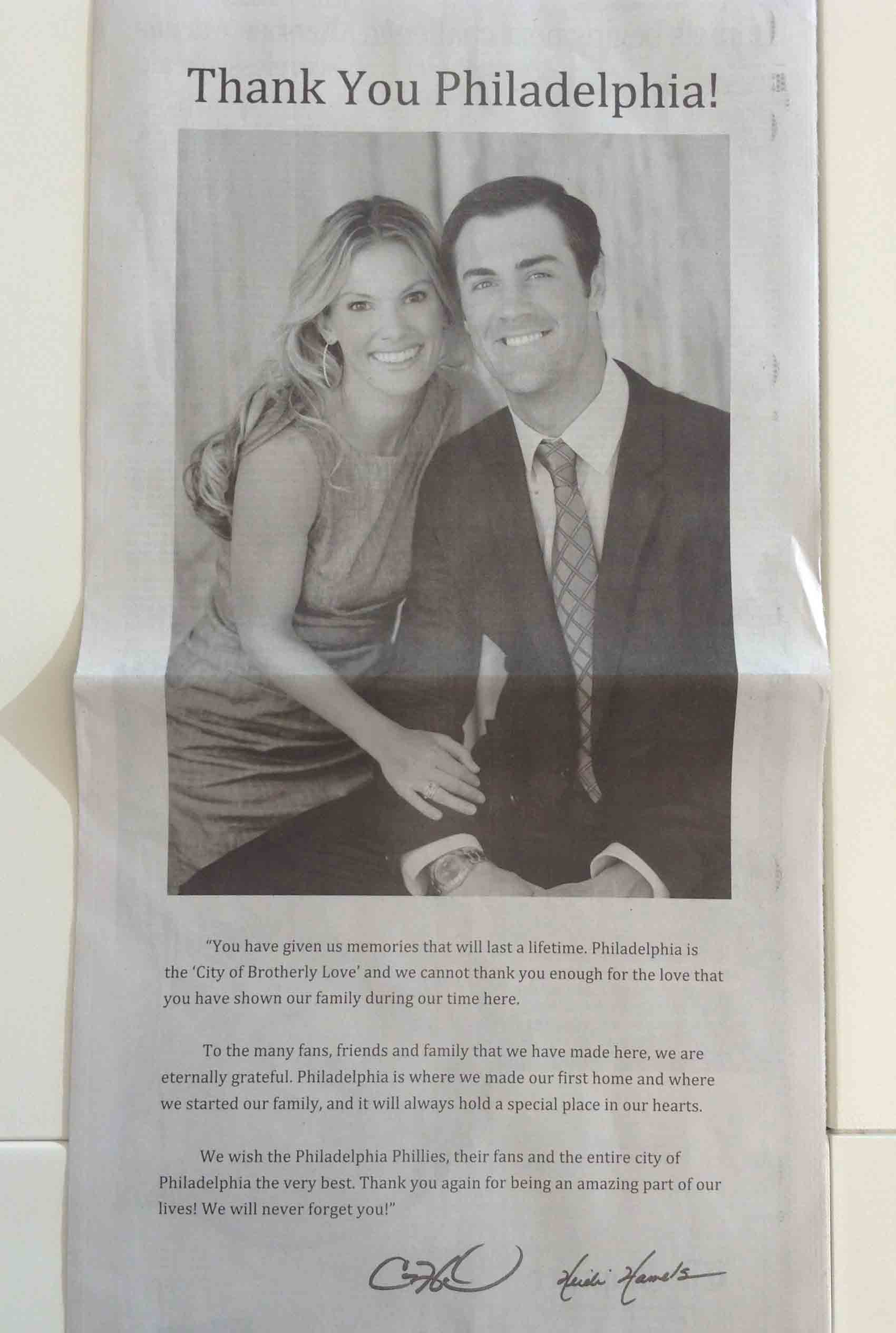 "You have given us memories that will last a lifetime. Philadelphia is the 'City of Brotherly Love' and we cannot thank you enough for the love that you have shown our family during our time here.

To the many fans, friends and family that we have made here, we are eternally grateful. Philadelphia is where we made our first home and where we started our family, and it will always hold a special place in our hearts.

We wish the Philadelphia Phillies, their fans, and the entire city of Philadelphia the very best. Thank you again for being an amazing part of our lives! We will never forget you!"

Hamels says he will always have a Phillies' jersey in his home.

Fans say the ad was a class act.

"I think it's awesome. He was a great guy. He was someone you want on your team but unfortunately we had to deal him to rebuild our farm system," said Tom Kurek.

"It was a classy move. He's a classy guy - took us to the championship, MVP, great player - tough to see him go," said Bill Hughes.

Part of the ad reads, "Philadelphia is where we made our first home and where we started our family and it will always hold a special place in our hearts. Fans say while they're sad to see Hamels go, they say the move was necessary.

"He was someone you want on your team but unfortunately we had to deal him to rebuild our farm system," said Kurek.

Hamels left his mark on Philly not only in sports, but also in education with the Foundation he started with his wife in 2008.

The non-profit also took out a full page ad in Sunday's Inquirer, promising that while Hamels is no longer a Phillie, the Foundation is still committed to Philadelphia schools.

Fans say it's the end of an era.

"I am sad when a lot of the Phillies that I've watched for the past few years leave. With J-Roll it's sad. It's one of those things, you get used to watching the players for so long, and they're a part of Philly," said Pam Yeager.
Related topics:
sportsphilliesphiladelphia philliesmlbaction news sportsbaseballphilliessportscole hamels
Copyright © 2020 WPVI-TV. All Rights Reserved.
More Videos
From CNN Newsource affiliates
TOP STORIES