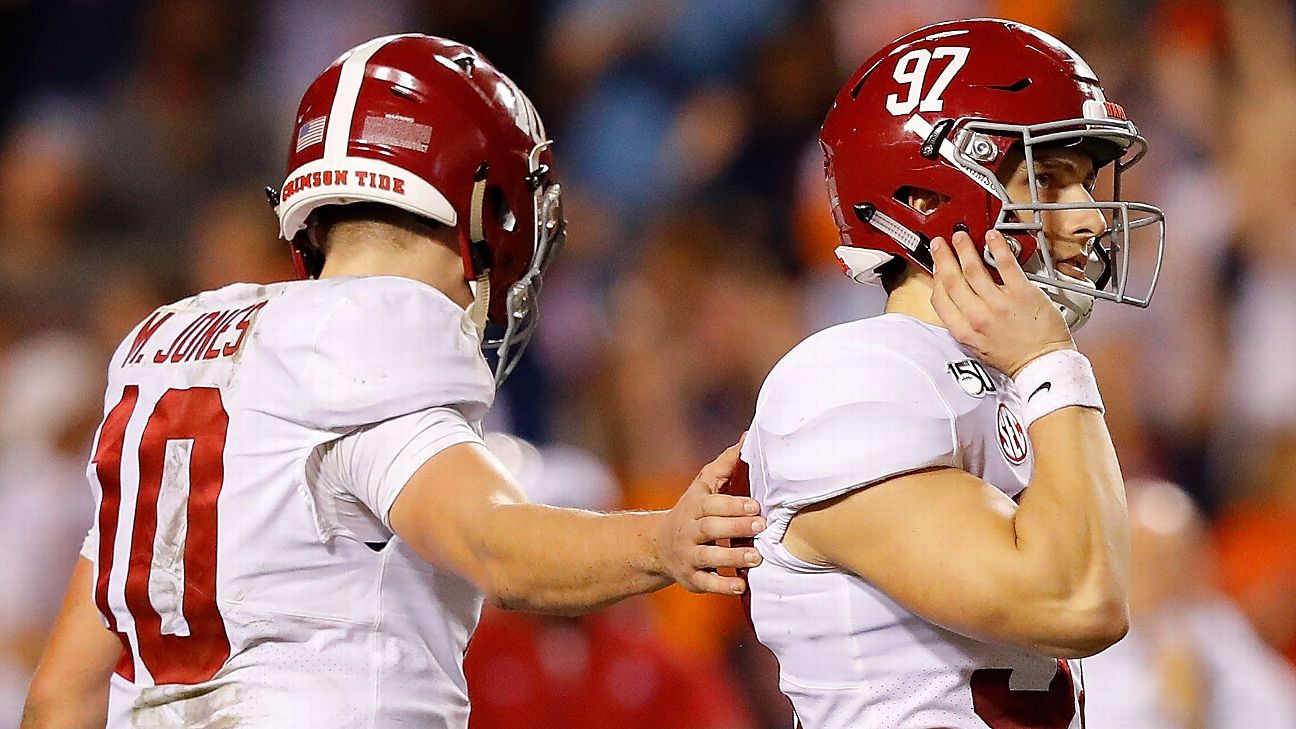 Remember back in September when Alabama was supposed to be the class of the SEC and Tennessee was headed toward its worst season ever? My, oh my, how times have changed.

Alabama is, well, mortal. It started with that loss to LSU, continued withTua Tagovailoa's season-ending injury and came to a head with a loss on the road Saturday at Auburn. Penalties and porous defense -- two things you never associated with a Nick Saban-coached team -- reared their ugly heads as the Tide fell out of the playoff race.

On the other end of the spectrum, how about Tennessee? The Vols spent a few weeks at the bottom of our power rankings early on -- for good reason. They lost to Georgia State and BYU to start the season and got hung out to dry at Florida. But then a weird thing happened: They didn't quit, and instead they steadily improved.

Jeremy Pruitt made his case for SEC Coach of the Year by winning five straight games to end the regular season and rising all the way to No. 7 in our rankings. Depending on how the bowl season goes -- remember when we wondered whether Tennessee would even reach eligibility? -- the Vols might even find a way to pass Texas A&M. -- Alex Scarborough

The Buckeyes finished the regular season undefeated and will have a rematch with Wisconsin for the Big Ten championship. The Badgers were able to beat Minnesota in the final game this weekend, pushing Wisconsin back up in the power rankings. While the top few schools in the conference had excellent showings this season, the bottom half of the conference struggled through most of conference play. Only half of the teams in the conference finished the season with winning records, and three teams finished with three or fewer wins overall. -- Tom VanHaaren
1. Ohio State

With the regular season complete, the two teams that have stood head and shoulders above the rest of the conference conclude there, and they'll duke it out in the Big 12 championship game: Oklahoma and Baylor. While Oklahoma was expected, Matt Rhule engineered one of the surprises of the season by leading the Bears to 11-1. The rest of the conference was littered with parity, as no other team had fewer than four conference losses, and four teams -- Oklahoma State, Kansas State, Iowa State and Texas -- ended at 5-4 in the conference. Questions abound at Texas and TCU, which underperformed expectations, K-State's debut season under Chris Klieman was a solid one, and West Virginia showed encouraging signs, winning two of its last three. Next we'll see if the Big 12 can squeeze into the playoff by sending the winner of the title game into the top four. -- Sam Khan Jr.
1. Oklahoma

Headed into Friday's conference title game against Oregon, Utah is the clear No. 1 team in the Pac-12 and in good position to qualify for the College Football Playoff. What the Utes don't have in the way of key wins this season they've made up for in sheer dominance. Since losing to No. 22 USC without star running backZack Mossfor most of the game, Utah has won eight straight games by an average of 29 points. Only one of their wins all season -- at Washington -- was by fewer than three scores.

It's still possible that Oklahoma or Baylor could vault the Utes even if they beat Oregon, which is why a strong performance Friday will be key. The nightmare result for Utah this week -- other than a loss to the Ducks -- would be if LSU loses to Georgia, which would likely result in both SEC teams landing in the four-team playoff field. If Utah loses to Oregon, the Ducks would head to the Rose Bowl, and Utah would land in either the Cotton Bowl as an at-large team or the Alamo Bowl. -- Kyle Bonagura

Clemson was the easy pick. Before the season, there was little doubt about who owned the ACC, and the Tigers were courteous enough to oblige, ransacking the conference on a weekly basis.
Virginia, on the other hand, was a wild card. The preseason pick to win the ACC Coastal held up its end of things, however, and secured a spot in the conference championship game by topping rival Virginia Tech for the first time since 2003. Virginia becomes the seventh different team to win the Coastal the past seven seasons.

Clemson now needs simply to get past Virginia for a trip to the playoff, and the Cavaliers look like they could be bound for the Orange Bowl. That's the good news. 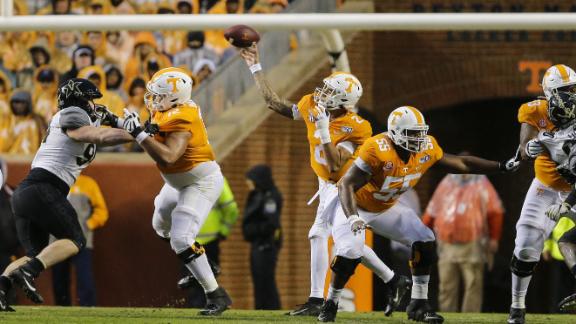 Tennessee tops Vandy to extend win streak to five
The Volunteers continue their late-season resurgence, defeating the Commodores 28-10 to end a three-game slide in the series. 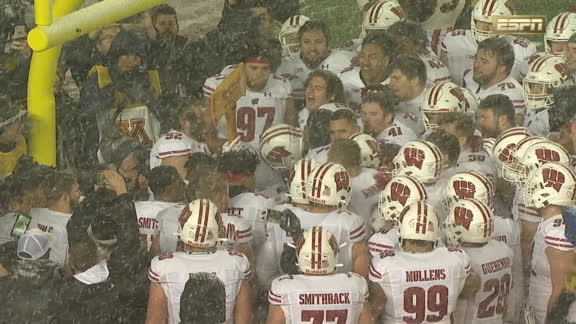 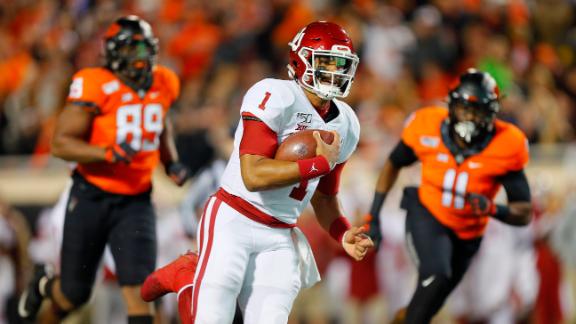 Hurts runs, catches and throws a TD in Oklahoma's win
Jalen Hurts does it all, as he runs in for a 28-yard touchdown, hauls in a 4-yard TD and throws a 3-yard score as the Sooners win Bedlam. 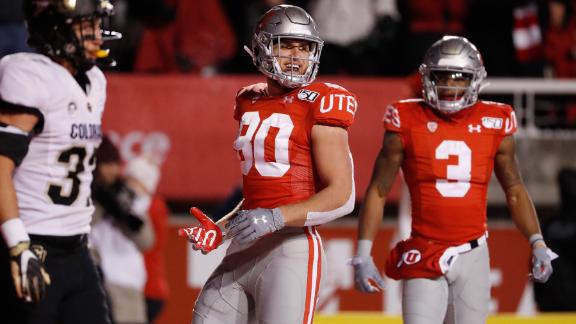 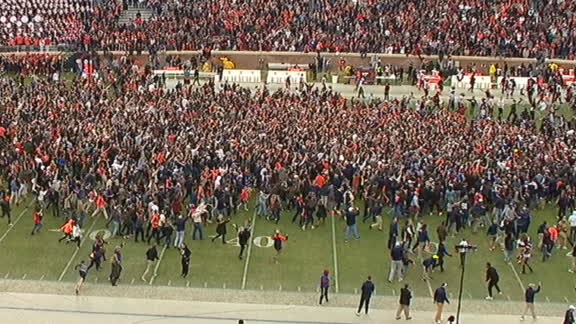