College football game to circle now for each Top 25 team 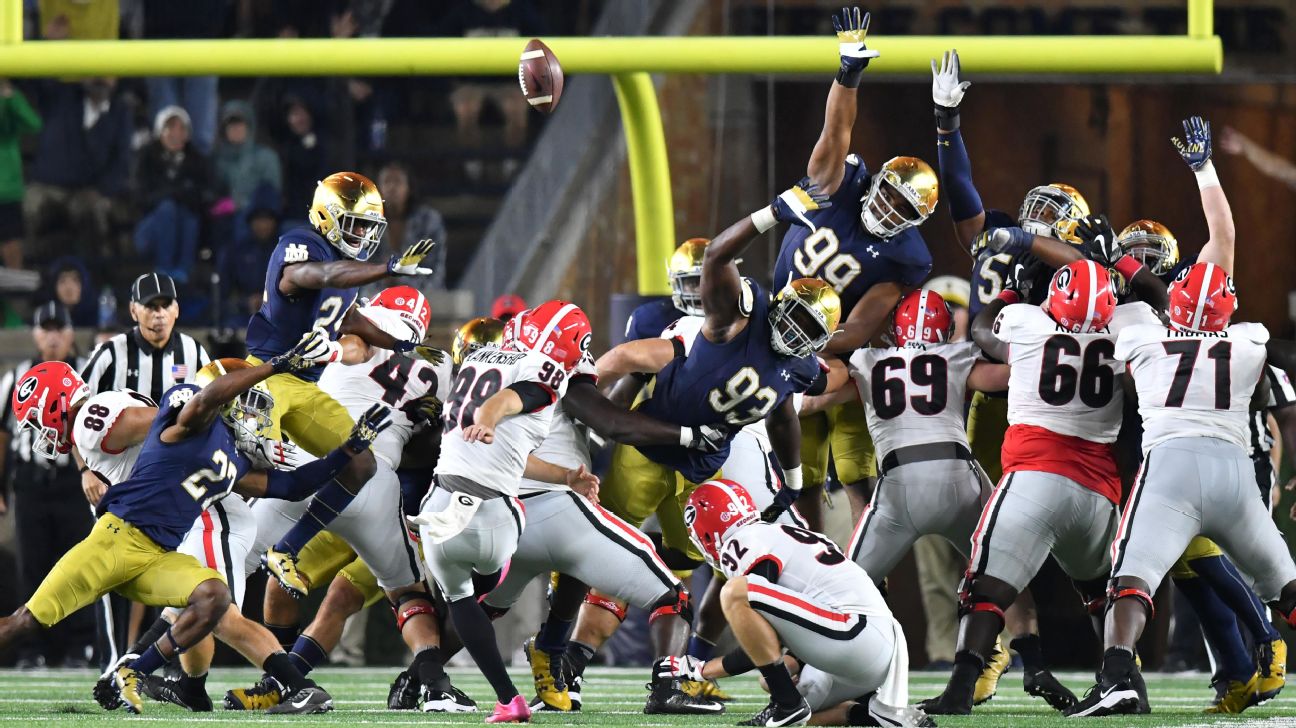 The college football season is still five months away -- with spring games not starting in earnest for another two weeks -- but it's never too early to look ahead to the most intriguing matchups of the fall. From nonconference battles like Clemson vs. Texas A&M to the Big Ten's battle for supremacy -- can Jim Harbaugh get past an Urban Meyer-less Ohio State squad? -- these are the battles we can't wait to see.

In the big picture, a Week 2 nonconference game probably doesn't mean as much for the Tigers' chances at a fifth straight trip to the playoff as their ACC slate does, but there's little doubt the home date against Texas A&M is the marquee event of the season. The Aggies came close to knocking off Clemson in College Station, Texas, a year ago, and Jimbo Fisher's team will likely be more prepared for this one. Of all the early-season interconference matchups, this one figures to be among the most entertaining.-- David M. Hale

The first month and a half of the Crimson Tide's schedule is, shall we say, lacking. A season opener against Duke isn't what it was with Blue Devils quarterback Daniel Jones off to the NFL. After that, it's New Mexico State, South Carolina, Southern Miss and Ole Miss, which isn't exactly inspiring. So hold tight for that game at Texas A&M. The Aggies are building under former Nick Saban assistant Jimbo Fisher. At Kyle Field, this game could be very interesting.-- Alex Scarborough

Not since 2008 have OU and Texas both been ranked in the top five heading into the Red River Showdown. With the Longhorns on the way back up, that could change Oct. 12, which would set up perhaps the biggest bout at the Cotton Bowl since Sam Bradford and Colt McCoy squared off in a shootout classic 11 years ago.-- Jake Trotter

A nonconference game of this caliber is usually reserved for the first or second week of the season. Instead, we'll have to wait until Week 4 for Georgia-Notre Dame. But it should be worth it. Who can forget the last time these two teams met? Two years ago, in South Bend, Indiana, it was a classic that went until the game's final minutes. This year might yield the same, this time in Athens, Georgia, as both teams harbor championship aspirations.-- Scarborough

Quarterback Justin Fields and the loaded Ohio State offense are likely to post some big numbers in the first month of the season. A visit from the talented Spartans defense early in Big Ten season will give the Buckeyes a good test to see if they have the kind of firepower that can keep the program on a trajectory for its third consecutive conference title.-- Dan Murphy

The strength of the Irish's case for a playoff spot -- if they have one to make at the end of the season -- will swing on how well they play during an early trip to SEC country. A win or a good fight against the Bulldogs could keep the Irish in the thick of the postseason conversation. A definitive loss would leave them with a perception problem that might be tough to overcome.-- Murphy

As big as the Oklahoma game will be, the Longhorns have an opportunity to make a statement beforehand, with LSU coming to Austin, Texas, on Sept. 7. Toppling an SEC opponent for a third time under Tom Herman would give Texas a ton of momentum going into Big 12 play, and the Oct. 12 showdown against Oklahoma.-- Trotter

Miami won out over Tennessee and Georgia because getting off to a good start against Miami is a must to open Year 2 for Dan Mullen. These two programs are longtime rivals even though they no longer play against each other every year, and yes, they bump up against each other in recruiting. But more importantly, Florida finished last season with such big momentum, it would be a serious letdown to lose this game.-- Andrea Adelson

The Game is likely to remain the only one that matters until Wolverines coach Jim Harbaugh beats Ohio State or brings a championship back to Ann Arbor, Michigan. The latter isn't likely to happen without the former. Harbaugh and staff have brought the program back to a consistent level of good. To reach the next level, they'll have to snap their seven-year losing streak to the Buckeyes and avenge 2018's embarrassing beatdown at the Horseshoe. -- Murphy

Can the Ducks do what Washington couldn't do last year? The circumstances aren't exactly the same, but like Washington in 2018, the Ducks open with a neutral-site game against Auburn. If Oregon wins, it would not only be a statement for the Ducks but provide a much-needed boost of morale for the Pac-12. It's the type of stage that can give quarterback Justin Herbert's Heisman chances a boost and set up the Ducks to become a larger part of the national conversation.-- Kyle Bonagura

There are plenty of big games on A&M's schedule (Alabama, Clemson, LSU) but only one against a top team that the Aggies have yet to face. The trip to Athens should be a fun one for A&M fans as Sanford Stadium will provide a classic SEC game-day atmosphere. It will also be the first of a challenging two-game stretch to finish the slate for the Aggies, as they have to go to Georgia and to LSU to close out the regular season.-- Sam Khan Jr.

Big nonconference games early in the year are always compelling and this one should be, too. The Tigers go to Austin to face Texas in the first regular-season meeting between the two teams since 1954, when LSU opened that season at Texas (the two teams have had two postseason meetings since then, in the 2003 Cotton Bowl and the 1963 Cotton Bowl). Both programs are on the rise -- LSU coming off its first 10-win season since 2013; Texas coming off its first since 2009. This will be a big barometer game for both teams.-- Khan

There is a unique structure to the Cougars' schedule. Their first three games are nonconference games, the next four are against teams in the Pac-12 South, then they play the five teams in their own division consecutively to finish the season. It's like the games get progressively more important building up to this trip to Oregon in late October. Wazzu has won four straight against the Ducks; it has never beaten Oregon five straight times.-- Bonagura

Once again, UCF has two Power 5 nonconference games on the schedule. The first, at home against Stanford, is important as the Knights continue their quest to prove they deserve more national respect. Every one of these games is crucial for that, but also because a Group of 5 team cannot afford to slip up anywhere on its schedule if it wants to make the case it deserves a playoff shot. A loss here, and UCF will lose that argument -- and possibly even the inside track at another New Year's Six game.-- Adelson

In 2017, the Orange beat Clemson at the Carrier Dome. Last year, they nearly did it again in Death Valley. Both games were billed as Syracuse playing well beyond expectations. In 2019, however, the tenor has shifted a bit. It'd still be an upset, but no one is overlooking Syracuse this time around, and the burgeoning rivalry with the Tigers could blossom into something far bigger if Dino Babers' crew can pull off a win. It could put Syracuse in the driver's seat for the ACC Atlantic.-- Hale

This matchup has gone back and forth in the past few seasons, with Penn State demolishing Michigan in 2017 in a lopsided 42-13 win. Michigan got revenge in 2018, beating Penn State 42-7. If Penn State wants a turnaround from its season last year, it's going to have to beat Michigan, Michigan State and Ohio State, and it will all start with the Michigan game in October.-- Tom VanHaaren

By this point, the expectation here is that a new starting quarterback will be making his second start and his first against a FBS opponent following the season opener against Eastern Washington. Will that be Georgia transfer Jacob Eason? That's a widely held assumption, but coach Chris Petersen has a few other talented quarterbacks. If Cal's defense can play close to the level it did in 2018, it will be a huge test for the Huskies, even at home.-- Bonagura

The Utes will begin their defense of the Pac-12 South title in Los Angeles, where a win against USC would have the potential to make a meaningful early-season statement. At this point, Utah should expect to win this game. The Utes have been more physical and more disciplined than USC and there's nothing to indicate it will be much different by the end of September.-- Bonagura

Quarterback Clayton Thorson is off to the NFL and transfer quarterback Hunter Johnson is presumably taking over the starting spot. Northwestern will be debuting a new quarterback and opens the season against Stanford at Stanford. That will be a tough test and a good indication of whether this Northwestern team is building off the 9-5 season it had in 2018, or has some work to do after losing some key pieces to the roster.-- VanHaaren

Stanford has a brutally tough schedule. All three of its nonconference opponents -- Northwestern, UCF and Notre Dame -- finished ranked in the final AP top 25, and it plays USC and Oregon in September. The game at UCF is the most intriguing, though, because of all the conversations the past two seasons about how UCF would stack up with Power 5 teams, especially strong programs like Stanford.-- Bonagura

It's not a conference game, but a Week 3 battle against its in-state rival will matter when Iowa has to play Michigan, Penn State, Purdue, Northwestern and Wisconsin all in a row. The only break the Hawkeyes have in that span is a bye between the Northwestern and Wisconsin games. So this matchup against Iowa State will be important in setting up the rest of the season for this team.-- VanHaaren

Let's get this thing going right away as Auburn travels to Arlington for what promises to be a huge neutral-site game against Oregon. The Ducks, under second-year coach Mario Cristobal with star quarterback Justin Herbert back for another season, are perhaps the top contender in the Pac-12. Auburn, on the other hand, is a mystery, with embattled head coach Gus Malzahn resuming playcalling duties on an offense without a clear-cut answer to replace Jarrett Stidham at quarterback.-- Scarborough

The first real gauge of how much the Huskers have improved in their second season under head coach Scott Frost will come against a rival Frost knows well. Nebraska's defense especially will have a chance to show its growth while trying to slow down the Buffs' duo -- quarterback Steven Montez and receiver Laviska Shenault -- who ruined Frost's debut with a late touchdown last September. -- Murphy