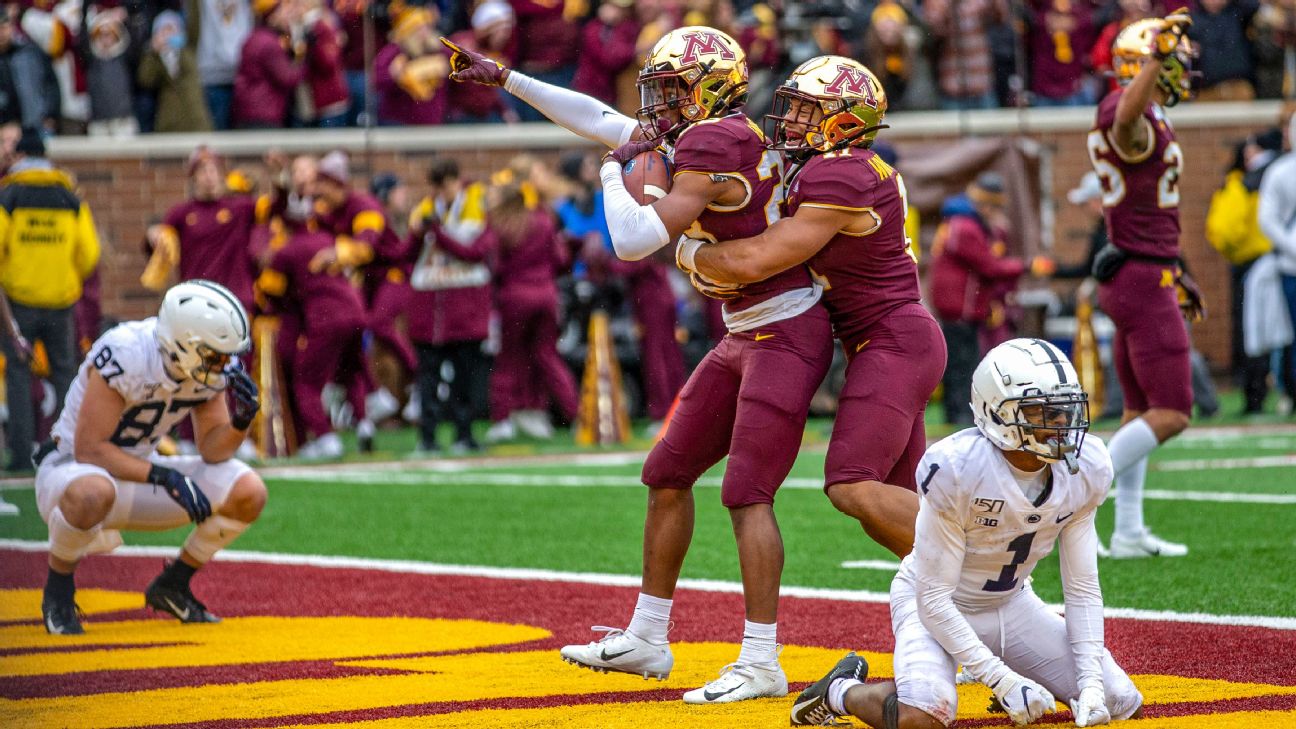 Imagine, if you will, a place where P.J. Fleck doesn't just have Minnesota rowing the boat, but partying aboard a boat heisted from some Rick Ross video.

Imagine waking up to find that a team -- the defending national champion, actually -- has a clear shot to the playoff without having played a single opponent likely to be ranked in the top 25.

Close your eyes and envision a scenario in which a team that, just two years ago, finished 1-11 -- and is now among the final five unbeatens. Or a scenario where Lovie Smith is going bowling, where an SEC team gets housed at home by San Jose State and Western Kentucky in the same season, where Texas is celebrating another last-second win over a team from Kansas, and where Appalachian State owns both North and South Carolina.

Saturday was supposed to separate the men from the boys on the field, and it certainly did that. The results, however, have shaken the very fabric of the college football universe, a disruption in the space-Tide continuum, where up is down and Alabama's playoff hopes are on life support.

Certainly, LSU's 46-41 victory in Tuscaloosa shouldn't come as an enormous shock. These Tigers are good, with an offense capable of tormenting even the most astute defensive coordinator and a Heisman favorite at quarterback. And, as we no doubt hear on repeat between now and the official announcement of the College Football Playoff, Tua Tagovailoa was hobbled, his ankle taped to keep him upright in a game in which he still mustered every bit of magic to throw for more than 400 yards.

But for all the logic behind LSU's march through Alabama, it still feels like some strange dream. Could the Crimson Tide, participants in every playoff to date, really be done?

The final score shows a valiant effort by Alabama, but it also belies the real impact of LSU's performance. The Tigers totaled 559 yards of offense, the most against an Alabama team since 2014 and the most in a win over a Saban-coached Tide team. To be sure, Joe Burrow was transcendent -- whizzing bullets on quick throws for which Alabama had no answer, scrambling for crucial yardage to wriggle out of nearly every breakdown. There's a case to be made that, at the moment, the best coach in the SEC is the guy nobody wanted just three years ago, while the merry-go-round on Saban's staff might have finally caught up with him.

Nick Saban has now been schooled in his last two consequential games. Not a good look for the GOAT.

What is shocking isn't so much that it happened than that it has happened so often of late. Alabama has given up 450 yards or more 15 times under Saban. Six of those games have come since December 2018. Burrow, too, was just the latest QB to torch the Tide. The quarterbacks of the past five ranked opponents to face Alabama have combined for nearly 2,000 yards, 15 total touchdowns and no interceptions and completed 63 percent of their passes. All five have topped 300 total yards of offense. To see Clyde Edwards-Helaire rack up 180 yards and four touchdowns is mind-boggling against an Alabama defense. Except, given the youth up the middle of this particular defense, it's actually not all that shocking.

Perhaps more surprising was the scene in Minnesota, where the Golden Gophers -- a team that narrowly escaped South Dakota State to open the season -- utterly exposed Penn State's disastrous secondary, pulling off a 31-26 upset of the Nittany Lions. Tanner Morgan threw more touchdowns (three) than incompletions (two), Antoine Winfield Jr. picked off two passes, and Fleck crowd-surfed the locker room afterward. Minnesota is leading the country in partying. Indeed, a dominant Minnesota is not unique. The Gophers have seven national championships in their history. It's just that the most recent one came when Prince was in diapers.

The losses by Penn State and Alabama clarified the playoff picture enough that, while Virginia Tech's upset of Wake Forest erased Clemson's best shot at beating a ranked team, the Tigers -- dominant in a 55-10 win over NC State -- probably don't have to worry about winning a beauty contest with the committee. It's too bad. Dabo Swinney would've dominated the talent competition.

Baylor, ranked 12th, might be the team with the most complaints for the committee, but the Bears didn't exactly help their case by going to three overtimes with TCU before emerging with the victory. Baylor remains undefeated, with Oklahoma on deck next weekend. Wherever this season ends, it's a long way from where Matt Rhule began, inheriting a program in utter turmoil two years ago.

Speaking of complaints, Chad Morris might need witness protection in Arkansas after getting demolished by Western Kentucky. He is perhaps not alone on the SEC hot seat, either. South Carolina's Will Muschamp might own one of the season's most stunning upsets with a win at Georgia, but Saturday's home defeat to Appalachian State means he'll need to pull off another stunner against Clemson in the finale if the Gamecocks are to make a bowl.

And then there's Illinois. If there's anything approaching rock-solid proof that this, indeed, is some sort of strange alternate reality, it's the Illini. A month ago, Smith's team was 2-4, left for dead in mid-October -- or, as it's usually described in Illinois, a typical season. Then a stunner against Wisconsin, with a last-second field goal to win it, followed by victories over Purdue and Rutgers, and another shocking comebackagainst Michigan State on Saturday. Illinois scored 27 fourth-quarter points to erase a 31-10 deficit, taking a 37-34 lead with 5 seconds left to become bowl-eligible for the first time since 2014. There's a little Ron Zook-era magic in the air in Champaign, and we can't get enough of it.

Sure, somewhere on some other timeline, all remains normal in the world. Alabama's D is good, Illinois is bad, and Ohio State is busy apologizing for some inexplicable Big Ten loss. In that universe, it all makes sense, college football as we've come to know it.

On this timeline, though? It's a brave new world, where Coach O is magic, Minnesota has playoff hopes and virtually anything seems possible in the next three weeks.

Well, that was easy

Ohio State was a 43-point favorite against Maryland on Saturday, which might've seemed like a lot if you haven't seen Maryland play football lately. For the Buckeyes, it took a little more than a half of football to cover that spread. They led 42-0 at intermission, won 73-14, and for the ninth time in nine games celebrated a win by at least 24 points.

How rare is that feat? According to ESPN Stats & Information research, it's only the seventh time in the AP poll era a team won each of its first nine games by 24 or more -- and the first since Ohio State did it in 1973.

Only one team has ever won each of its first 10 by that margin. That was the 1971 Nebraska Cornhuskers, a team that won the national championship.

Think Ohio State has a shot to match Nebraska? The Buckeyes have Rutgers on deck.

Jonathan Taylor had only 52 yards against Ohio State a week ago, and his 2.6 yards per rush marked the worst average of his career. So what did he do to get back on track? How's 31 carries for 250 yards sound?

Taylor scorched the Iowa defense in a 24-22 victory, racking up the ninth 200-yard game of his career. Northern Illinois' Garrett Wolfe is the only other FBS player in the past 20 years to do that, per ESPN Stats & Info data. And with at least four games left on the docket for Taylor, he has a shot to match the NCAA record of 10, held by three of the best to ever carry a football: Ricky Williams, Ron Dayne and Marcus Allen.

Home cooking for the Hokies

Virginia Tech pulled the upset over No. 19 Wake Forest on Saturday behind a stellar effort from the defense in a game honoring legendary coordinator Bud Foster, who is set to retire at season's end.

The celebration surrounding Foster was hardly the only reason for a festive crowd in Blacksburg, though. Though the victory marked Virginia Tech's 13th win over a ranked opponent in the past decade, according to ESPN Stats & Info research, it was the first time the Hokies had beaten a top-25 team at home since 2009, when they upended No. 9 Miami.

You hate to see it

East Carolina pushed No. 25 SMU to the brink, but ultimately fell 59-51 Saturday. That comes just one week after nearly toppling No. 17 Cincinnati in what ended up a 46-43 loss. The Pirates are just the second team in the past decade to score at least a combined 94 points in consecutive games and lose both, following a similarly unpleasant stretch by West Virginia last season.

Is this really necessary any longer? Sure, we probably said the same at this point a year ago, when Tagovailoa looked like a sure thing for the Heisman Trophy, only for Kyler Murray to make a late charge and swipe the award. So perhaps we're getting ahead of ourselves. But Burrow's 31-of-39 for 393 yards at Alabama -- that's a Heisman line. Good luck to the rest of the contenders trying to find a performance to top that.

Four more touchdowns in a 73-14 win over Maryland. Up next is Rutgers. The only problem is going to be keeping Fields in the game long enough to pad the stats.

Hurts had his eighth game of the season with at least four total touchdowns. In the past decade, only three players have had nine -- and two of them (Marcus Mariota in 2014, Murray last season) won the Heisman.

He leads the nation in rushing yards and rushing touchdowns and has a way cooler name than "Joe" or "Justin," so that's a solid case for an invite to the ceremony.

The final line looks awfully good: 418 yards and four TDs. But Tagovailoa also had two turnovers, completed just a tick better than 50% of his throws, and was upstaged by Burrow.

Give it to the big man

It has been tough for Clemson to steal the spotlight with a schedule that features several high school teams, so the Tigers pulled out the one play guaranteed to end up on every highlight show this weekend: the Big Man Touchdown.

On a goal-line run, Trevor Lawrence handed to 330-pound guard John Simpson, who did his impression of Clemson running over its ACC schedule, rumbling into the end zone for the score.

While Clemson alum William "The Refrigerator" Perry set the standard for Big Man TDs, he never scored one with the Tigers. Still, Simpson does match the school's record, which unofficially belongs to Dexter Lawrence, who did it just last season at 342 pounds.

Under-the-radar play of the week

There has not been much good news for Florida State this season, but in its first game since the firing of coach Willie Taggart, D.J. Matthews willed FSU to a win over Boston College with a wild run-after-catch. Matthews hauled in the pass from James Blackman near midfield, split two defenders, juked two more as he headed toward the sideline, then dove the final 5 yards for the pylon. The 60-yard reception was the difference in a 38-31 victory that, with Alabama State on deck, all but assured the Seminoles would get back to a bowl game this season.

Under-the-radar game of the week

Minnesota toppling Penn State and LSU upending Alabama made for a terrific Saturday of undefeated teams going head to head, but they didn't have a monopoly on the action. In the Ivy League, Dartmouth handed Princeton its first loss of the season too (27-10) to move to 8-0 and snap the Tigers' 17-game winning streak. The Big Green's dominant defense held the high-flying Tigers to just 246 yards and their worst scoring day since 2015's season finale, which also came against Dartmouth. It's a sad day for Princeton, which really has nothing without football. 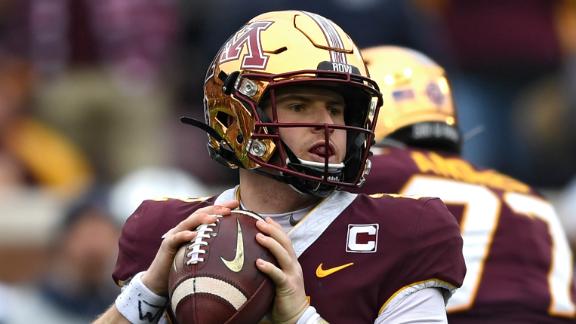 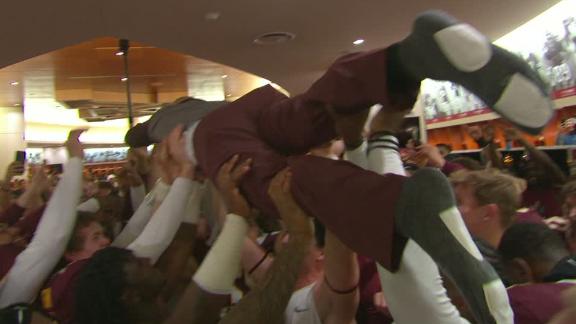 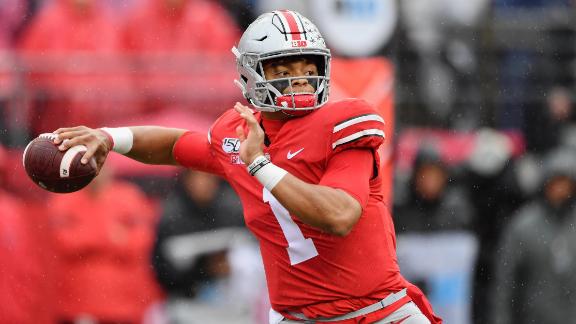 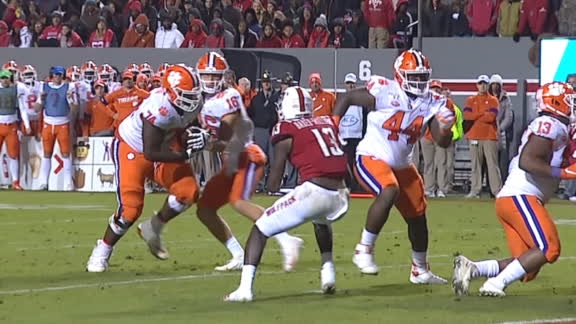 Clemson O-lineman Simpson barrels in for TD
Clemson offensive lineman John Simpson takes the handoff up the middle for a one-yard touchdown. 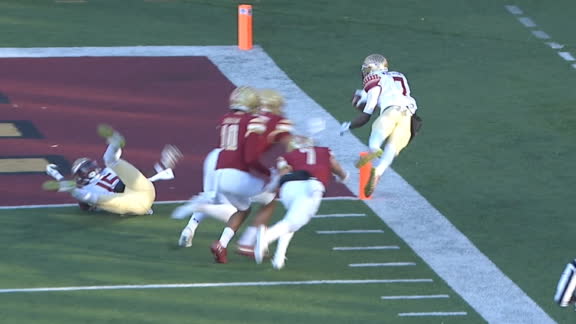