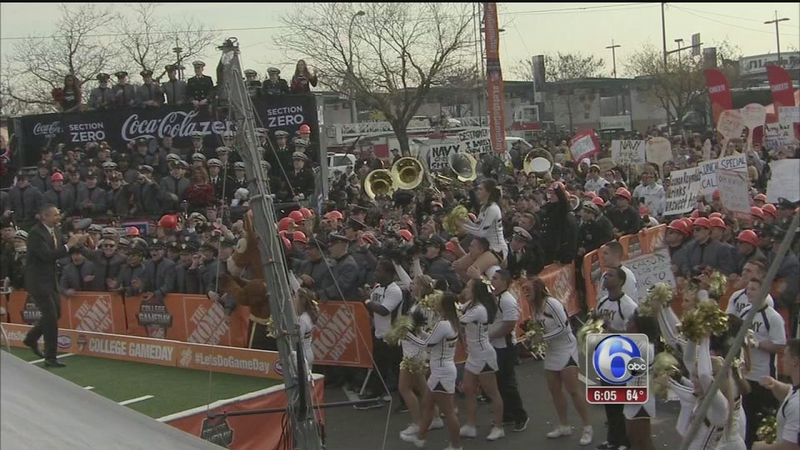 SOUTH PHILADELPHIA (WPVI) -- Ignoring the taunts of the West Pointy Army Cadets, midshipmen from the U.S. Navel Academy in Annapolis filed past signs in hand happy to be back in Philadelphia not just for the Army-Navy Game, but for ESPN's College GameDay.

It is the second time this season the show has visited the City of Brotherly Love.

The first was in October for the highly-anticipated face-off between the Temple Owls and Notre Dame Irish.

The show returned Saturday for the 116th Army-Navy Game.

It was a close game, but Navy came from behind to win by just four points.

"I've actually never been to College GameDay before. It's one of my favorite shows so I was pretty stoked to get the opportunity to come here and do that," said Cadet Lt. Zach Blankenbaker of the U.S. Military Academy.

For the past 13 years, Navy has been the victor.

"This is pretty much what we do. We always win," said plebe Fabiola Duran Juache with the U.S. Naval Academy.

But the cadets were not deterred.

"We have a shot every year. Any team can be beaten on any given day," said Cadet Cpl. Rachel Hornick with the U.S. Military Academy.

Legendary Navy quarterback Roger Staubach was the show's special guest as the hosts made their picks for the week but, for many fans and former military members, it was the high-ranking officers in the crowd that had them star struck.

"It's a little overwhelming. An admiral walks by and you have a moment of 'Oh!', but you realize you're not dressed in uniform so it's OK," said Jamie Bartlett of Louisville, Colorado.

Fans of both Army and Navy say while the rivalry is intense, there's a mutual respect that goes along with the military competition. And that's one of the best parts of the Army-Navy tradition.

"Being an American and seeing the camaraderie between the two teams is amazing," said Amanda Auckerman Flanagan of Columbus, Ohio.

"You'll see cadets and midshipmen jabbing at each other all day, but at the end of the day we'll be hugging and embracing and the fans as well. But it's electric. No other game matches quite what you have here," said Cadet Wyatt Frasier with the U.S. Military Academy.
Related topics:
sportssouth philadelphiaphilly newsnavyarmycollege football
Copyright © 2021 WPVI-TV. All Rights Reserved.
TOP STORIES
2 dead, 2 injured after fire spreads to 5 homes
Restaurant receives hate-filled emails after requiring vaccine proof
Rare set of identical triplets born at Penn Medicine
Body found in Philly ID'd as missing Bucks County woman
Philly third-grader bakes to repair playground
Vaccine or regular testing required at some health facilities in NJ
Police investigating murder-suicide in NJ hotel parking lot
Show More
Canceled Spirit flights cause long lines, short tempers at PHL
Father of 5 who was waiting out COVID vaccine dies from the virus
Korkmaz sticking with 76ers on 3-year, $15 million deal: ESPN
Spotted lanternflies are on the move and spreading out, experts say
Fatal case of West Nile virus reported in Camden County
More TOP STORIES News