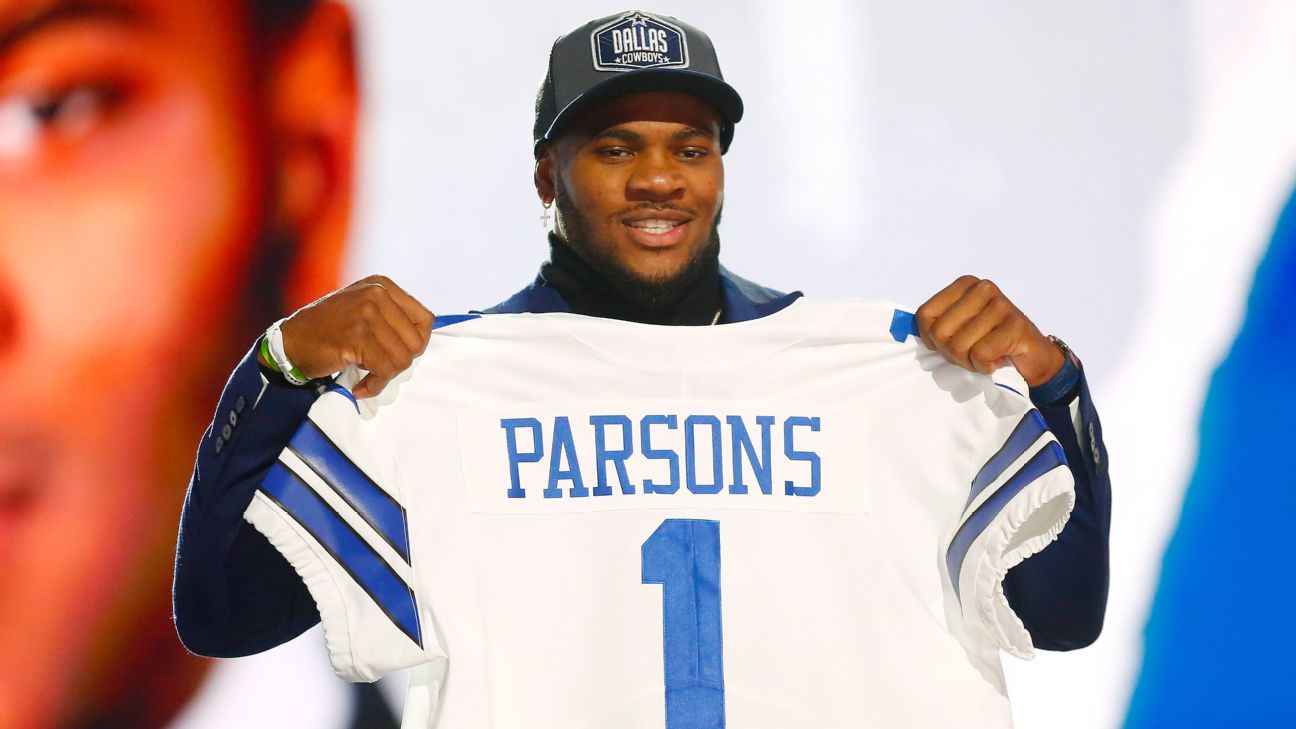 FRISCO, Texas -- Having seen their top choices at cornerback go at picks Nos. 8 and 9, the Dallas Cowboys traded the 10th pick within the NFC East to the Philadelphia Eagles and selected Penn State linebacker Micah Parsons at No. 12 in the NFL draft.

Dallas also received a third-round pick, No. 84 overall, from the Eagles, who used the No. 10 pick on Alabama receiver DeVonta Smith, the reigning Heisman Trophy winner.


The Cowboys have made no secret about their desire to add defenders during the draft, and had their eyes on cornerbacks Jaycee Horn and Patrick Surtain II. But they were thwarted by the Carolina Panthers and Denver Broncos, who took Horn and Surtain, respectively, in the two slots before their initial selection.

Cowboys owner Jerry Jones said Parsons was the highest-ranked defensive player on their draft board and indicated Dallas had the opportunity to move down even more and acquire more picks, but passed. Any disappointment of losing out on the cornerbacks was mitigated by having the chance to get Parsons.

"We didn't have the stomach to risk losing [Parsons] relative to our evaluation of him," Jones said.

Making the trade within the division is a bit tricky, but the expectation was the New York Giants at No. 11 would have selected Smith, so the Cowboys were able to add an extra third-round selection, giving them five picks inside the top 100.

Without further moves, the Cowboys will have picks Nos. 44, 75, 84 and 99 in the second and third rounds, giving them more chances to add to a defense that allowed a franchise-record 473 points in 2020 and have a new defensive coordinator in Dan Quinn.

Parsons opted out last season, but his arrival coincides with the retirement of another Penn State linebacker, Sean Lee.


Parsons had 192 tackles, 19 tackles for loss, 6.5 sacks, six forced fumbles and five pass deflections in 26 games (13 starts). At his pro day, he was timed at 4.39 in the 40-yard dash, and at the pre-draft press conference on Tuesday, coach Mike McCarthy mentioned the Cowboys have to get more speed on defense.

"Micah is a dynamic player," Cowboys coach Mike McCarthy said. "I think clearly when you watch him play, he's a multi-positional player. Obviously he can play on the ball as a linebacker. He's got natural pass rush skills. That's something that we talked about really about the last 10 days preparing for what was going to go on in this draft. Obviously playing off the ball, he's an impact rusher inside and outside. ... It gives us a lot of flexibility to line up with the other linebackers. He's a pressure player. He's definitely going to make an impact for us on defense."

The selection puts a question into the future of Leighton Vander Esch, their first-round pick in 2018. The Cowboys have yet to pick up Vander Esch's $9.1 million fifth-year option for 2022. Without the option, Vander Esch would become a free agent after this season. Jaylon Smith's $7.2 million base salary in 2021 became fully guaranteed on the fifth day of the league year.

The in-division trade is not unprecedented. It is the sixth draft-day trade the Cowboys and Eagles have consummated since 1989. In 2007, the Cowboys traded with the Eagles to move into the first round to select outside linebacker Anthony Spencer for second-, third- and fifth-round choices.