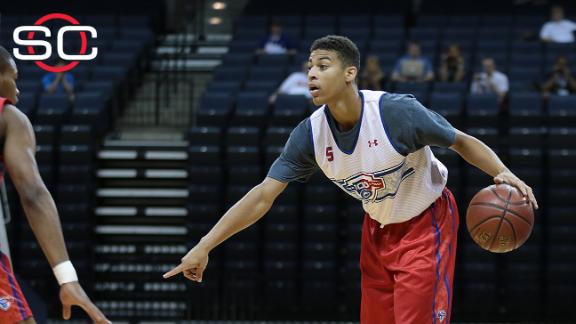 Junior Derryck Thornton, the 11th overall player in the ESPN 60, has decided to reclassify up to the class of 2015 and commit to Duke to be their point guard for the 2015-16 season.


He now stands as the third-ranked point guard and the 17th overall player in 2015.

Before Thornton's decision, Duke was faced with the possibility of going into the season without a true point guard. Thornton is a setup, pass-first point guard who can break down a defender off the bounce and create help. His speed and quickness can pressure opposing point guards.


Thornton has a strong work ethic and challenges himself as he works out at the Impact facility in Las Vegas with professional players in the offseason and gets up early in the morning before school during the season to work on his game.


"I have been considering reclassifying up for months, so it's been on my mind," Thornton said.


Thornton and his father, Tank, took an unofficial visit to Duke for the game against North Carolina and he can still remember the atmosphere.

"It was crazy there and I get along well with all the players," Thornton said.


Coming off a national championship, Duke is losing four players -- Jahlil Okafor, Justise Winslow and Tyus Jones to the NBA draft and Quinn Cook to graduation. Jones was not expected to leave after one year but his play in the postseason enhanced his stock and he decided to put his name into the draft. He is expected to be a first-round pick.


"Once Tyus declared, Duke came after me hard," Thornton said.


Thornton has been courted by Louisville for 2015 and Kentucky for next year.


"Last night, Coach K [Mike Krzyzewski] and [assistant] Jeff Capel came in for the visit and they told me how much confidence they have in me to be their point guard next year. They were very prepared about my game and their plan for me.


"They told me they could have went after fifth-year transfers but wanted me instead. I am excited about the opportunity and the challenge."


Thornton starred at Findlay Prep (Henderson, Nevada) this past season as he guided the Pilots to a 29-3 record and to the semifinals of the Dick's Nationals before losing to Montverde Academy (Florida), who won the championship.


Duke has a talented roster coming back, including Grayson Allen, Matt Jones and incoming five-star shooting guard Luke Kennard, but it was without a point guard.


Duke's recruiting class now stands at No. 2, but the Blue Devils are not done as later Tuesday they have a home visit with ESPN No. 3 Brandon Ingram.


"It seemed like it all happened so fast but Derryck has worked his whole life for this opportunity. It's an unreal opportunity," Tank Thornton said.