Doug Pederson: Will be 'tough' for Lane Johnson to play Thursday 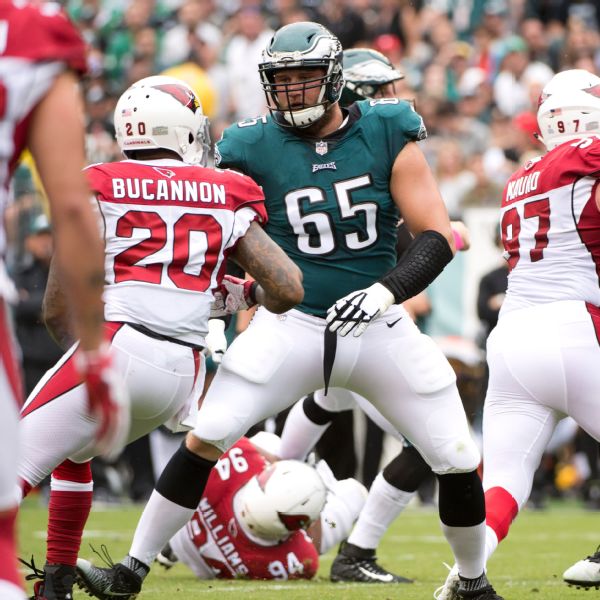 Johnson suffered a head injury in the first half against the Arizona Cardinals on Sunday. After being evaluated in the locker room at halftime, it was determined that he had a concussion, per Pederson, who acknowledged it would be "tough" for Johnson to clear protocol in time for the Panthers game.

Preparations for the Panthers will begin with second-year playerHalapoulivaati Vaitaimanning the right tackle spot. Vaitai, the former fifth-round pick out of TCU, had his share of struggles while filling in during Johnson's 10-game suspension last year but has shown signs of progress. He took over for Johnson in the second half of the Eagles' 34-7 victory over Arizona and held his own.

"Honestly, I'll have to go back and watch the tape, but I didn't really notice [a drop-off]. We didn't miss a beat," quarterback Carson Wentz said. "Big V stepped up and it seemed like he did a great job. We'll go back and watch tape. We know Lane's a heck of a football player. Hopefully he can recover and be ready to go. We'll see what happens, but at the same time, Big V's had tons of valuable experience and reps last year and he got a ton better, so we feel solid if Lane's not ready to go. We know Big V will be ready."

Entering Sunday's game, the Eagles were 8-2 with Johnson in the lineup and 2-8 without him since the beginning of the 2016 season. On Thursday, this offensive front will face a Carolina defense that is tied for third in the NFL with 17 sacks.