Eagles fan hit with fame after hitting pole gets some glory 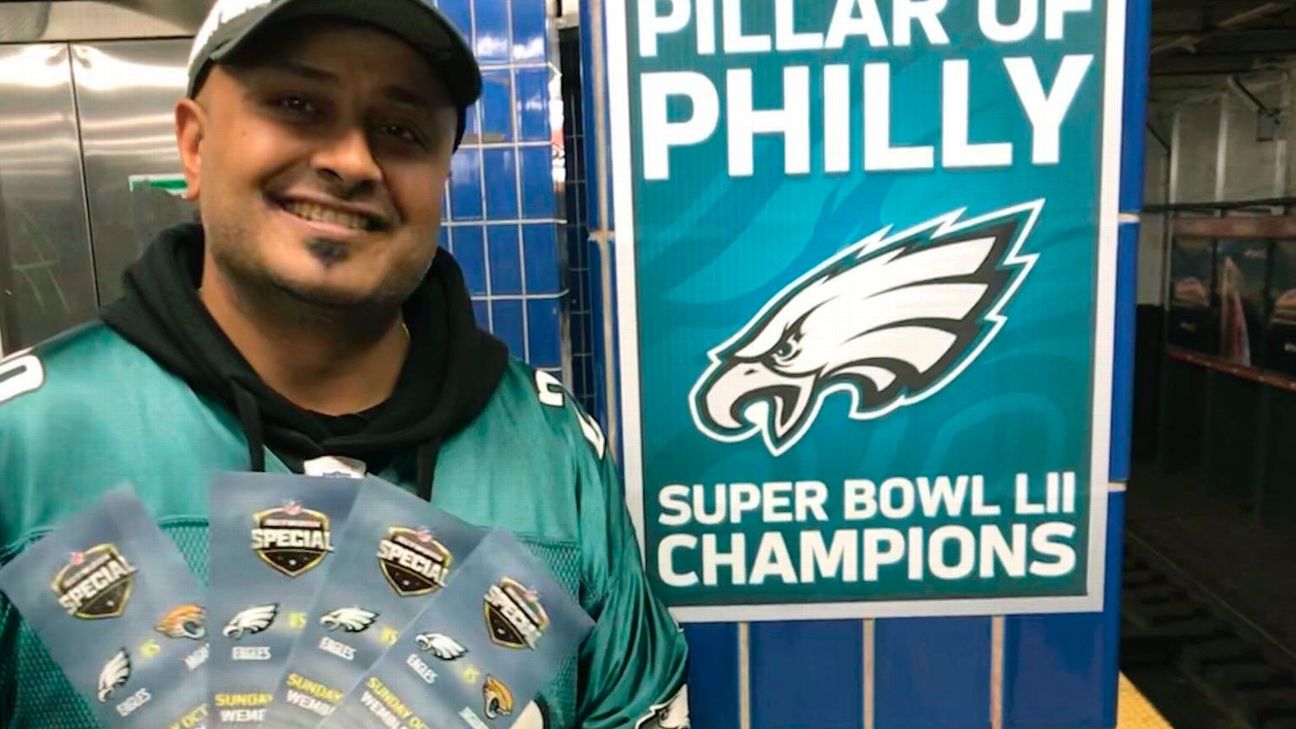 The moment in the spotlight isn't over yet for a Philadelphia Eagles fan who stumbled into fame as a viral video star after running into a subway pillar earlier this year.

Jigar Desai is now the subject of an NFL digital short feature, shot ahead of the Eagles game against the Jacksonville Jaguars in London on Oct. 28. In the short, he's surprised with tickets for himself, his wife and two kids to attend the game in England.

Back in January, Desai, sporting a Brian Dawkins jersey, was trying to rally subway passengers for the NFC Championship game against the Minnesota Vikings. He was filmed running alongside the train on the platform, and then all of a sudden slamming into a pole and bumping off the train.

Passenger video of his fan fail took off on social media, prompting everything from Philly sports pride to general mockery.

"At the end of it all, if you are going to have a knucklehead moment caught on camera from two angles, then it better have results," said Desai, who works as a consultant with a life sciences and health care company.

With the Eagles going on to win the first Super Bowl and Dawkins being inducted into the Pro Football Hall of Fame, "I couldn't have scripted a better ending," he said.

Folks with the NFL reached out to him in the spring about the video project and last weekend they went to his home in the Philadelphia suburbs to do some filming, he said.

"The piece focused on him and his love of the Eagles," said Brenna Webb, a spokeswoman for NFL Media, of the short film. The eight-minute video will roll out on NFL digital and social media platforms next week, she said.

The filmmakers said they told him they wanted to see the pillar and they took the subway to the scene of the injury, the Ellsworth-Federal stop on the Broad Street subway line. That's when Desai said he noticed Eagles cheerleaders, Swoop the mascot and a Mummers string band gathered around the pole for a celebration. Swoop presented him and his family with the tickets to London.

"It was a total surprise, and as a dad, it was so great to be there with my kids. My youngest always says So you hit a pole. So what?" he said.

Hitting the pole meant more than you would think to Desai. A new tradition was now born. Two weeks later, an hour before the Super Bowl game between the Eagles and Patriots, Desai had what he called a "ceremonious" yet safe "run-in with a post at home to keep the positive mojo going." He's vowed to do that for every future Eagles playoff game.

And what does he want folks to take away from the great pole collision of 2018?