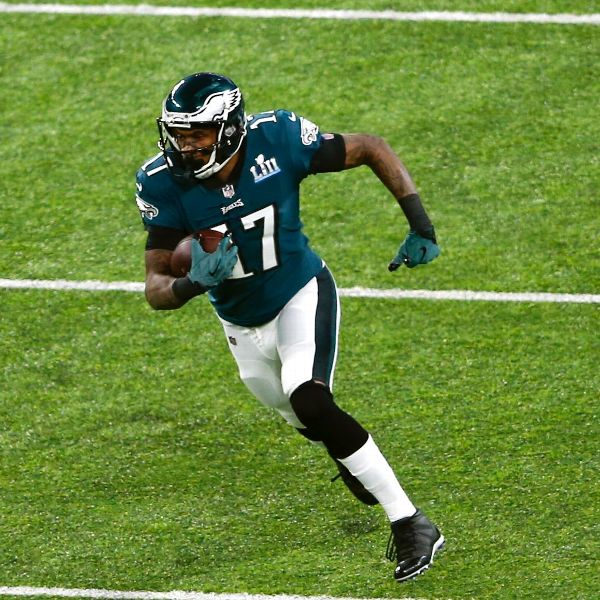 "We're excited to get him in the mix and see where he's at," said Pederson, who would not commit to Jeffery playing Sunday at the Tennessee Titans. "We'll make a final determination later in the week."

Jeffery injured his shoulder during training camp last year and played through pain for the entire season. He did not miss a game, and finished with 57 catches for 789 yards with nine touchdowns. He added 12 catches for 219 yards and three scores in the postseason, including a leaping 34-yard touchdown grab in Super Bowl LII.

In December he signed a four-year, $52 million extension with Philadelphia that includes $27 million in guarantees.

Jeffery began practicing in a limited capacity two weeks ago, and has been ramping up his level of participation of late.

The Eagles have been very light at the receiver position to start the season. Mike Wallace suffered a fractured fibula against the Tampa Bay Buccaneers and Mack Hollins was placed on injured reserve with a groin injury, depleting a corps that was already without its top wideout in Jeffery.

The running back position has been hit with the injury bug as well. Darren Sproles (hamstring) and Jay Ajayi (back) both missed last week's game against the Indianapolis Colts. Pederson said "both are feeling really well" and are expected to practice this week.

"We just finally got our quarterback back, we've got some injuries at the running back position, at receiver, so just getting some continuity and some flow with that group, getting them to play together is something these next few weeks will be important for us," Pederson said.

The defensive secondary, meanwhile, could be without a key piece in safety Rodney McLeod, who suffered a knee injury against the Colts.