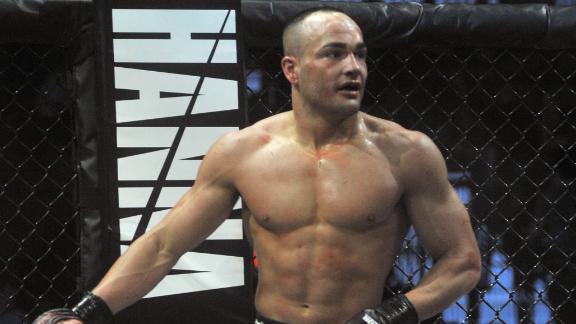 UFC president Dana White announced via Twitter on Tuesday afternoon Alvarez signed with the UFC and will fight Donald Cerrone in the co-main event of UFC 178 on Sept. 27 in Las Vegas. Cerrone (24-6) was previously scheduled to fight Bobby Green on the same date, but switches to Alvarez instead.

UFC officials confirmed to ESPN.com Green has been removed from the card and will fight a different opponent at a later date.

Alvarez (25-3) vacates Bellator's 155-pound title, which he won in a split decision victory against Michael Chandler at Bellator 106 in November. The company has no future matching rights on Alvarez, according to Coker.

"We granted Eddie his unconditional release this morning," Coker told ESPN.com. "Eddie is free to explore the free-agent market. We wish him the best in the future."

Coker, former CEO of Strikeforce, said he met with Alvarez and his manager Glenn Robinson in Miami shortly after replacing former Bellator CEO Bjorn Rebney at the head of the company in June.

At that time, Coker said it was clear Alvarez did not consider Bellator his long-term home.

"After sitting down with him and getting to know him, it was just a very hurtful situation for him," Coker said. "I think the damage was already done. It became clear there was a wall there, and it was not directed at me.

"They just made it clear the damage was done."

Alvarez, who appeared in the inaugural Bellator event in April 2009 and won the title later that year, provided the following statement to ESPN.com via text message.

"This was a long process but it's a decision that everyone seems happy with," Alvarez said. "I think it's important to say that I am genuinely thankful for the time at Bellator. I know that sounds a little crazy given everything I went through, but I've fought there since 2009 and have been involved in some really amazing fights.

"The staff there always treated me great and I'm going to miss seeing a lot of those familiar faces around for sure. Myself and my team had some really good discussions with Scott, but in my heart I knew I was ready to move on and start the next chapter of my career."

The announcement effectively ends a near two-year saga between Alvarez and the promotion, which began in late 2012 when Alvarez fielded a multi-fight offer from the UFC after Bellator waived its 90-day exclusive negotiating period.

Rebney moved to exercise the promotion's right to match the UFC offer. Alvarez and his legal team argued, however, the Bellator offer was not the same. The two sides eventually filed countersuits against each other.

In August 2013, a settlement was reached that included two fights from Alvarez under the Bellator banner and then his unconditional release. Three months after the settlement, Alvarez defeated Chandler for the lightweight title.

He was scheduled to appear in a title bout against Chandler at a Bellator pay-per-view event in May, but withdrew due to a late concussion suffered in training. Chandler (12-2) went on to fight Will Brooks for an interim title and lost via split decision.

Coker said he had not discussed Alvarez's departure with either Chandler or Brooks (14-1) as of Tuesday morning but believed that fight would happen next, "maybe in November." He did not know if Brooks would be promoted to undisputed champion.

Alvarez has since recovered from the concussion and told ESPN.com he has resumed training and is "1,000 percent."