Lindblom was diagnosed with Ewing's sarcoma, a rare bone cancer, in December 2019.

On Thursday, the Flyers released video of Lindblom, 23, ringing the bell on the fifth floor of the Abramson Center at Pennsylvania Hospital and ending his cancer treatment.

"Thank you, guys," Lindblom tells the staff as they clap for him. "I actually got a gift for you guys."

The hockey star, wearing a mask due to the COVID-19 pandemic, presents them with his Flyers jersey.

Lindblom then posed for a photo with the nurses. 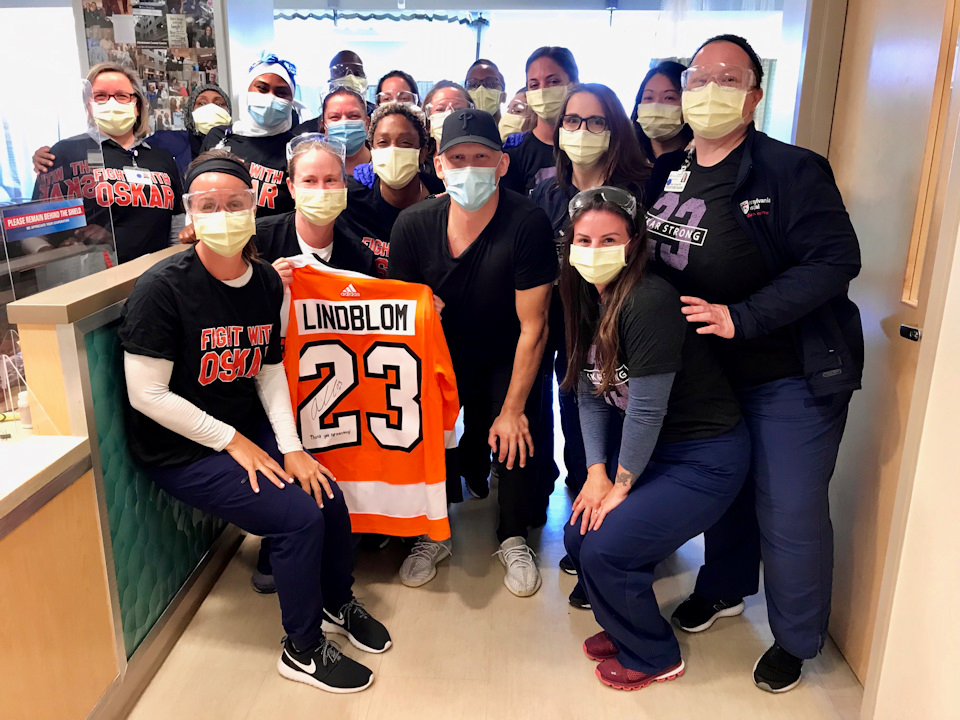 One nurse can be heard telling Lindblom, "You've been an absolute pleasure."

Speaking to the Flyers organization after leaving the hospital, Lindblom said, "It feels awesome to be done."

He said it was like having his birthday and Christmas all at the same time.

Flyers fans have been showing their support for the player by wearing shirts saying 'Oskar Strong.'

"From family to friends to fans, I can't even explain how much it meant to me. Especially in the start, it was a rough time. I got all those kind words and was really a big help along the way," Lindblom said.

Six months after the diagnosis, Lindblom practiced with teammates at the Flyers' training facility last week.

"That's the only thing I'm waiting for right now, to be done with my chemo and be back with the team and play some hockey," Lindblom said in an interview after he skated, provided by the Flyers. "That would be unreal to get back to real life again, and have fun."

When the Flyers announced Lindblom's diagnosis in December, the team said he would miss the remainder of the 2019-20 season. In the interview after practice Tuesday, Lindblom hinted that he won't be able to play with Philadelphia when the NHL resumes this summer with a 24-team tournament.

"It's still tough to not be as good as you used to be when you're normal," Lindblom said. "But it's fun to be out there, fun to meet all of the boys again, skate around, get the feel of it."

Lindblom was the Flyers' nominee this season for the Masterton Trophy, which is awarded annually to the NHL player who "best exemplifies the qualities of perseverance, sportsmanship, and dedication to ice hockey." The NHL will announce the winner this summer.

Lindblom, a native of Gavle, Sweden, had 11 goals and seven assists in 30 games with the Flyers this season; he was tied with Travis Konecny for the team lead in goals at the time of the diagnosis.

"I'm trying to enjoy my life after this," Lindblom said. "I can't complain. People have it worse, and I'm happy to be where I am right now."