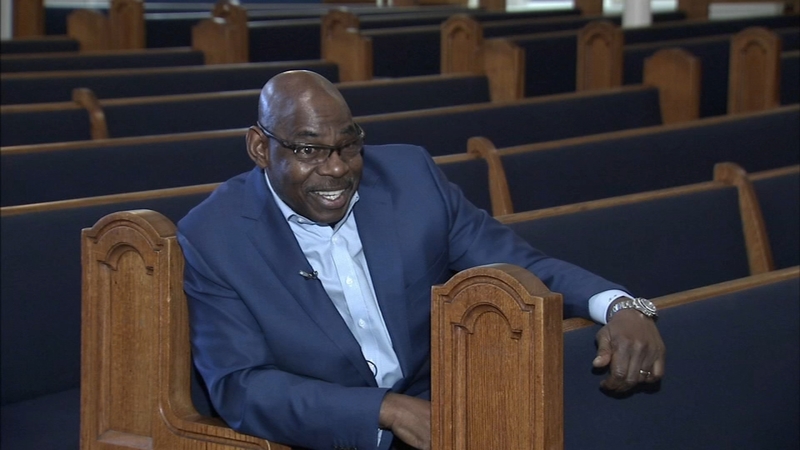 But one picture is his favorite.

"So proud of that moment. The first time a NFL player scored a touch down and kneeled down and prayed in the end zone," Pastor Lusk said.

Before his days behind the pulpit, Lusk was a backup running back for Dick Vermiel and the Eagles.

After a 70 yard touchdown in 1977 he knelt in prayer. The moment is widely recognized as a first in the NFL.

Now he's one of two official pastors for this year's Birds team.

While talking with reporters this week, Philadelphia Eagles quarterback Nick FOles said he is enrolled in seminary.

Lusk says the team has a burning faith and it starts with head coach Doug Pederson.

"(Pederson) is very serious about his faith," says Lusk. "He's not the kind of guy that's going to be bible thumping and quote the scripture, but you see it in his life."

During the season, Pastor Lusk led bible study for coaches on Thursdays and a service for players and coaches on Saturday Night.

Carson Wentz, Zach Ertz, and Trey Burton are among the many players committed to their faith.

"What I've seen is the team kind of blossom from a bunch that believe, to men who are disciples of Christ who are living out their culture," said Pastor Winsley.

Both pastors will keep this week's routine the same. The message from Winsley: Subdue your dream.

"The belief is in them, and the person that they're going to wrestle is themselves," Winsley said.

During the playoff run the Eagles relished in their underdog role. They are once again underdogs and during his service on the eve of the Super Bowl Pastor Lusk will focus on a story from the Old Testament -- David and Goliath.

"If that's not a David and Goliath situation, I don't know what is. I would just say to those who are listening who haven't heard the story, Goliath lost and David won," Lusk said with a laugh.