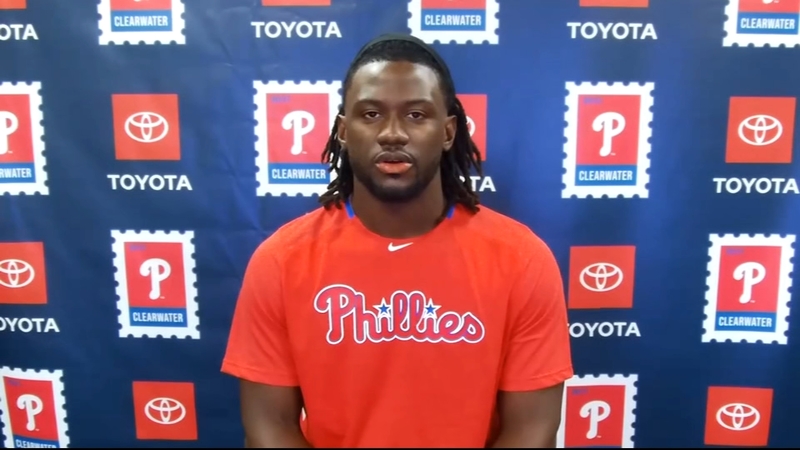 CLEARWATER, Florida -- After playing in his first game with the Philadelphia Phillies since his arrest on domestic violence charges two years ago, Odubel Herrera apologized and vowed he's a better person.

"I feel sorry because I made a big mistake," Herrera said Tuesday. "I know some people are not going to forgive me, and I understand that. I spent the last two years earning (my girlfriend's) trust back and I'm grateful she forgave me. Now, I would like to have the same opportunity with my teammates, our fans and the Phillies family."

The former All-Star center fielder was 1-for-3 with a single and stolen base in a 4-2 loss to Toronto. He played right field, and manager Joe Girardi said he "looked pretty normal."

Herrera had last played on May 26, 2019. He was suspended for the remainder of the season under Major League Baseball's domestic violence policy. The charges against Herrera were dismissed, and he was assigned outright to Triple-A Lehigh Valley on Jan. 16 last year and wasn't part of the 60-player pool for the shortened season.

Herrera will earn $10 million in 2021 in the final season of a $30.5 million, five-year contract that includes two club options, and he is at spring training as a non-roster player.

"I learned a lot the past two years," he said. "I feel mature. I have changed a lot. I feel I am a better person now."

Herrera underwent counseling in Philadelphia and also did virtual sessions.

"My relationship is better," he said. "I feel more mature."

Did the Phillies do enough to make the playoffs? Joe Girardi thinks so and also believes it's time for OF Odubel Herrera to get a second chance after his domestic violence suspension.

Herrera said he addressed teammates in the clubhouse before playing against the Blue Jays, and he plans to speak to other players who didn't travel for the game.

"I want to play baseball, help the team win and play my game," he said. "I told them I love this uniform and I feel happy to wear the uniform again."