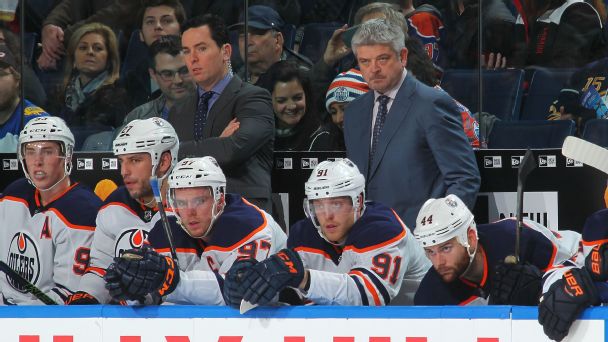 The NHL season is passing the quarter pole. Some coaches have managed to hop off the hot seat before their bottoms were seared, but others are still smelling smoke.

Here's another in a series of occasional temperature checks on coaches and their continued employment.

Even with Sunday's win over the Boston Bruins, the Oilers are a massive disappointment (9-13-2, 20 points) -- especially after McLellan led them to the second round of the playoffs last season, the first time Edmonton had made the postseason since 2006.

The Oilers have a minus-15 goal differential, and their minus-6 goal differential at 5-on-5 follows a season in which they were plus-26. They're scoring 2.67 goals per game, down from 2.96 last season. After finally finding some swagger inConnor McDavid's sophomore season, the Oilers' confidence looks shot.

So how much of this is on McLellan? Depends on how you view things.

The Oilers remain on sturdy ground as a possession team (54.14 percent Corsi at 5-on-5 entering the Boston game), and McLellan has a record to run on: He collected 311 wins over seven years with the San Jose Sharksandled the Oilers to 103 points last season. In the great coaching-vs.-construction debate, Edmonton appears to have a construction problem. The blue line is not good enough, and it's certainly not good enough to withstand the continued loss of Andrej Sekera to injury. The forward group has lost too much firepower (Taylor Hall, Jordan Eberle) and hasn't found sufficient replacements.

Still, McLellan is taking hits for his player usage. Leon Draisaitl is paid like a 1-A center but was deployed as McDavid's winger until recently. McLellan has also been criticized for the Oilers' man-to-man defensive scheme -- in the Boston Globe, and this is your reminder that Edmonton GM Peter Chiarelli used to be the GM in Boston -- that makes them too easy to play against. And again, the Oilers just look ill-prepared and out of sorts in many games.

The Flyers have gone seven games without a win (0-3-4), which will raise the temperature on any coach's seat, let alone one in his third season for a franchise that hasn't had a coach last four full seasons since Mike Keenan in the 1980s.

The Flyers went from a team that had a 10-game winning streak last season to "a lost franchise" faster than in the days when the late Ed Snider could sign a check for a mediocre goalie. Sam Carchidi of the Philadelphia Inquirerreports that the Flyers have won just 28 of their past 73 games, and while that might not put Hakstol on the hot seat "it should have him on notice, especially since several young teams (see theColumbus Blue Jackets, Winnipeg Jets and New Jersey Devils,among others) are badly outperforming the Flyers."

The next six weeks could determine his fate.

It's like when you're in the sauna and at first it feels delightfully warm and then seven games later it feels like fire ants are crawling on your face. Which is to say that Hakstol is under pressure to reverse course, and he knows that Scott Gordon is lurking in the AHL, with several of his former players on the current Flyers roster. Still, Hakstol helmed a 10-game winning streak this season, so this is a bit of recency bias, no?

Nothing like a few quality wins to snuff out the torches. The dark days in D.C. got a little brighter with victories over the Ottawa Senators, Tampa Bay Lightning and Toronto Maple Leafs. Trotz reminded his core veterans that they've been in this spot before. A reunion of Alex Ovechkin and Nicklas Backstrom sparked both players, and the Capitals are at 14-10-1 after 25 games.

Like leftovers from a Thai restaurant: super hot at first, at room temperature now, but could be warmed up again (probably) around April. Keep in mind thatTodd Reirden is on the bench as a potential replacement.

Off the hot seat